Marches and rallies against racism, the far right and police violence took place in over 140 communities in France June 12. These “Marches for Liberty” were  scheduled to be held a few weeks before regional elections, where the far-right National Rally (RN/Rassemblement National, Marine Le Pen’s party) will try to position itself as an electoral force for next year’s presidential election. 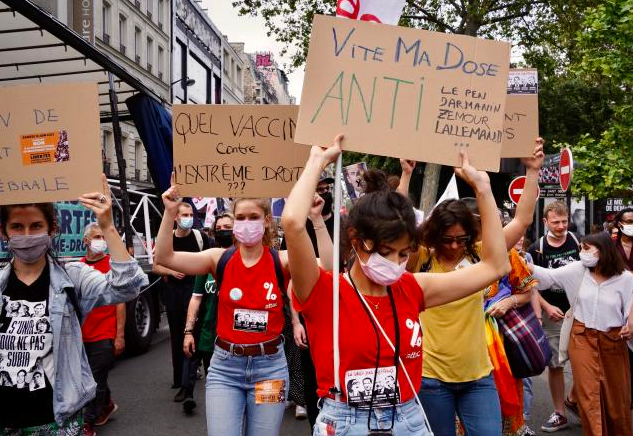 What was most impressive was the diversity of organizations that mobilized for these protests. As expected, all of the largest left-leaning parties came out, including France Unbowed (France Insoumise), French Communist Party, Green Party, Génération.s (a left-split from the Socialist Party), New Anti-capitalist Party (NPA), Socialist Party and the Party of the Left.

The coalition included a number of collectives and groups of activists who are concerned with issues facing immigrants and asylum seekers. Housing activists were there. So were those involved with climate change, including France Nature Environnement.

The General Confederation of Workers, the largest union of public sector workers and the second largest union in the private sector, played a major role in building the protests. In Marseille, the CGT marched behind a banner which read:  “We must remain united in order to dissolve capitalism that leads to fascism.” Their national call emphasized that racial discrimination is sharply felt in the workplace.

The U.S. press, including the New York Times, Washington Post and Associated Press, gave short shrift to these important demonstrations. They only covered an  incident in Paris where a neofascist threw flour on Jean-Luc Mélenchon, the leftist leader of France Unbowed, and they ignored the national character of this anti-racist protest.

Prior to June 12, Mélenchon, who came in fourth in the first round of the 2017 presidential election, had warned of the increasing boldness of the ultraright and the possibility of violence during the elections.