The 8-hour day is a bedrock gain of the world’s working class; the 8-hour day was won through intense battles during the later part of the 19th century and the first half of the 20th. Like any advance fought for and achieved by workers’ struggles, it has been under unceasing attack. 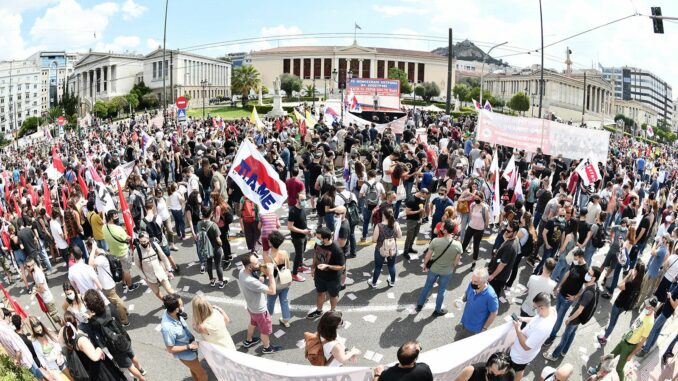 In Greece, where austerity programs imposed by the big imperialist banks have devastated the working class, and wages and pensions have been cut and cut again, the New Democracy government of Prime Minister Kyriakos Mitsotakis has announced it will “modernize antiquated laws” regulating hours of work. But Mitsotakis actually plans to massively regress working conditions.

The regulations Mitsotakis is proposing would let bosses impose a 50-hour week for 40-hours pay. They would make going on strike more difficult and abolish the right of unions to bargain a contract.

In response, the struggle of Greek workers to maintain the 8-hour day is intensifying. June 10 saw tens of thousands of workers come out in an enormous demonstration in Athens. Similarly large demonstrations and marches were held in Thessaloníki and Patras, Greece’s second and third largest cities, along with Piraeus, the port of Athens, Heraklion and other major cities.

About the only part of the Greek economy functioning on June 10 was the hospitals. The ferries, which are essential in Greece’s transportation system, were shut down completely.

The final vote on the labor bill is set for June 16, and the unions intend to shut the country down then.

General Secretary of the Greek Communist Party Dimitris Koutsoubas spoke in Athens June 10. He said: “No matter what the government does, this bill is condemned in the workers’ consciousness. The working men and women, the young people have now the last say. If they understand and realize their power, they can cancel this bill and consign it where it belongs, to the dustbin. They must not be living like slaves in the 21st century.” (tinyurl.com/yel83muq)