To grasp the essence of the meetings in Europe, in which Joe Biden has been talking nicely to Washington’s predatory imperialist allies, we should examine their historical precedent: the 1884-1885 Berlin Conference to divide and plunder the African continent.

Armed with this historical perspective, it is easy to debunk Washington and the corporate media’s whitewash of these mid-June 2021 gatherings — construed to be “summits” of fellow “democracies” that share “common values,” opposed to “autocracies.”

What are those common values? The Berlin Conference — with a fledgling U.S. power present — aimed to coordinate European colonialism’s looting of Africa. France and Britain had already seized the lion’s share of the continent, with Portugal, Italy, Germany, Belgium and Spain taking most of the rest.

The conference drew boundaries dividing the colonies to mitigate the interimperialist infighting, which slowed down the continent’s conquest and had the potential to unleash a war in Europe. Its other goal was to restrain competition from the emerging empires of Czarist Russia, Japan and the United States. 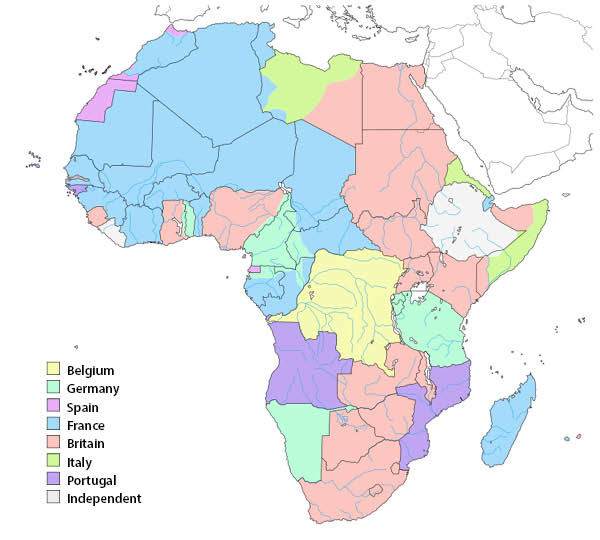 European claims in Africa, 1913. Today’s boundaries, which are largely a legacy of the colonial era, are shown. (Map source: Eric Gaba – Wikimedia Commons)

In 1885, Washington’s ongoing genocide of Indigenous peoples concentrated on its expansion in North America; the year predated U.S. seizures of Hawai’i, Puerto Rico, Cuba and the Philippines. At the Berlin meeting, Washington still played a role, being the first country to recognize Belgian King Leopold’s seizure of the Congo. Leopold oversaw the genocide of the Congolese peoples.

Fast forward 136 years to the current G7 summit in Cornwall, Britain and the NATO summit in Brussels. From 1885 to 1945, the U.S. became the world’s leading imperialist power and remains so. During 1921-1991, when the Soviet Union countered imperialist domination, many African and Asian nations won political independence, which is now under attack.

Since the breakup of the Soviet Union, Washington and its imperialist junior partners have destroyed other existing socialist states such as Yugoslavia and re-subjugated or destroyed nations that had gained some sovereignty including Sudan, Libya and Iraq. The U.S. did this using supranational organizations such as NATO, the World Bank, the International Monetary Fund and the G7. Washington designed the structure of these organizations during the Cold War period to maintain its leadership.

Break with Trump no break with imperialist goals

During Trump’s xenophobic, racist and thoroughly reactionary administration, he pushed the “America first” button so hard that Washington’s allies feared they would be denied their “share” of the spoils. Trump publicly insulted Europe’s government leaders.

Ruling-class strategists here feared Trump’s tactics would break up Cold War structures and harm U.S. imperialist interests. When Biden said, “America is back,” he meant that the U.S. is ready to again lead the imperialist alliance. Biden implied that Washington would respect the demands of the European ruling class — and of the Japanese, Australian and Canadian imperialists.

Biden is attempting to mobilize those allies against China and Russia. The “values” the billionaires and bankers Biden represents hold in “common” are the market values of coltan, uranium, petroleum and other essential natural resources that this plutocracy plans to monopolize.

To underline the connection between the 1885 and 2021 meetings, right now two joint U.S.-led military exercises are underway: Defender Europe in Eastern Europe and African Lion in Africa. They involve the same big powers.

The G7 and NATO summits won’t defend human rights. They may do little to soften rivalry among the imperialist states. The Berlin Conference results exploded soon enough into World War I.

Biden’s trip to Europe is a venture by a seasoned imperialist diplomat to resume Washington’s role as head of a plutocracy, nothing more.