John and Gabriel Shipton, the father and brother of award-winning publisher Julian Assange, will visit Philadelphia June 11 to headline a #HomeRun4Julian event near the Liberty Bell. The Shiptons will be joined by Dr. Marc Lamont Hill and representatives of local advocacy groups. 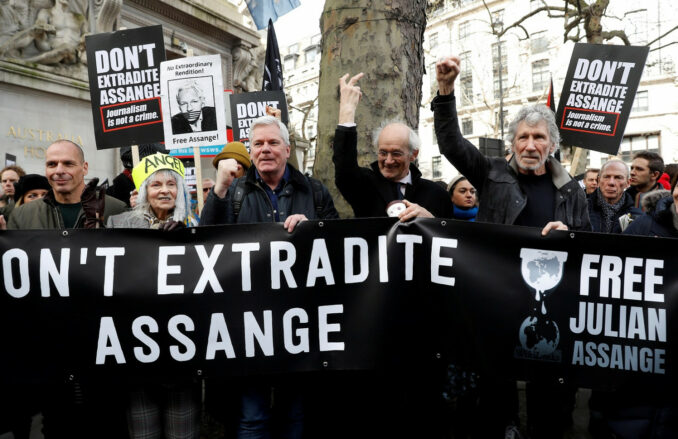 Outside the Australian High Commission in London, Britain, on February 22, 2020.

Imprisoning truth-tellers like Assange means that all journalists seeking to illuminate the public about information they have a right to know — such as the activities of their government — can be subject to persecution. This sets a grave precedent for the future of journalism as a whole and has provoked a chorus of condemnation from free press and human rights advocates around the globe, including the United Nations, who has ruled Assange “arbitrarily detained” since 2010.

A broad coalition of press freedom, antiwar and criminal justice reform groups are standing with the Shiptons in calling on the U.S. government to end its pursuit of Assange. The June 11 event is being endorsed and/or cosponsored by: The Assange Defense Committee, Courage Foundation, United National Antiwar Coalition, International Action Center — Philadelphia, Black Alliance for Peace, Food Not Bombs Solidarity, Mobilization 4 Mumia, Free Maroon Now, Maroon Party for Liberation and Free Ant Smith.

The Shiptons hope the tour, sponsored by the Courage Foundation, wakes Americans up to their government’s startling prosecution and prompts the Biden administration to drop all charges against Assange in defense of a free press. “For the first time in American history, a journalist has been indicted for publishing truthful information in the public interest. That’s why press and human rights groups around the world are in agreement that this is an existential threat to investigative reporting.” — Nathan Fuller, director of the Courage Foundation

“Philadelphia is an important stop on our tour, given its historical significance. We are looking forward to meeting near the Liberty Bell and speaking with local activists and media.” — John Shipton, father of Julian Assange

“My brother Julian Assange has effectively been a prisoner for over a decade because he published evidence of war crimes. The U.S. government wants to make an example out of him to deter journalists and whistleblowers.” — Gabriel Shipton, brother of Julian Assange

Tour information will be updated regularly at HomeRunForJulian.com.