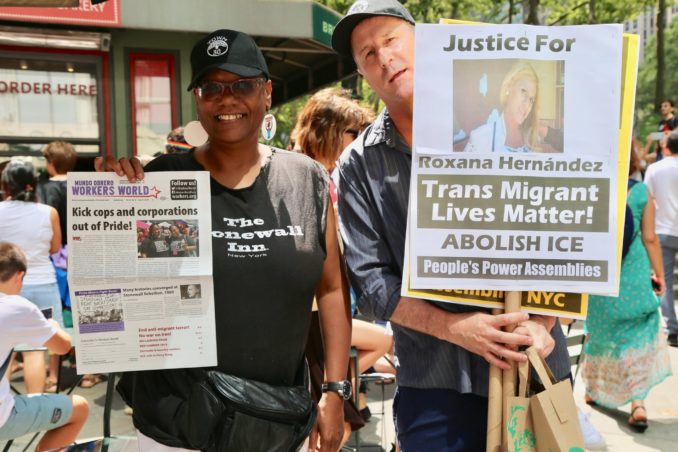 For over half a century, Workers World newspaper has covered the global struggle to end all forms of discrimination, persecution and violence against lesbian, gay, bisexual, transgender, queer and gender-nonconforming communities.

WW has consistently backed up our activist coverage with analysis. In the early 1970s, WW ran a series of articles that led to publication of “The Gay Question: A Marxist Appraisal” in 1976. Then in 1993, WW published “The Roots of Lesbian and Gay Oppression: A Marxist View,” with the first book’s original text and a new preface and afterword. (Read it at workers.org/books.)

In 2004 WW managing editor and globally recognized transgender leader Leslie Feinberg began the “Lavender & Red” series, which ran until 2008 in WW. A group of 25 articles from that series was later published as the book “Rainbow Solidarity in Defense of Cuba.” In 2012 Feinberg performed civil disobedience and wrote articles defending Black trans woman CeCe McDonald, who was charged with manslaughter after defending herself from a racist, bigoted attack.

WW helps to build mass struggles, like what’s been going on in the streets from coast to coast. This righteous outpouring of rage and protest over the racist cop murder of George Floyd came as the COVID-19 pandemic disproportionately impacted Black, Latinx and Indigenous peoples and immigrants.

Please help us get out the word. Join the Workers World Supporter Program. For a donation of at least $75 a year — or $100, or $300 or more if you can —  receive a year’s subscription to WW; a regular letter about timely issues; and one, two or three subscriptions, respectively, to give to friends. Members can receive a copy of the book: “What Road to Socialism?” upon request. (Or read it at workers.org/books)

New articles are posted daily at workers.org. Currently, one issue a month is being printed and mailed to subscribers. As soon as it’s possible, the newspaper will resume more frequent printing and mailing.

Write monthly or annual checks to Workers World and mail them, with your name and address, to Workers World, 147 W. 24th St., 2nd Floor, New York, NY 10011. Or sign up at workers.org to donate each month.