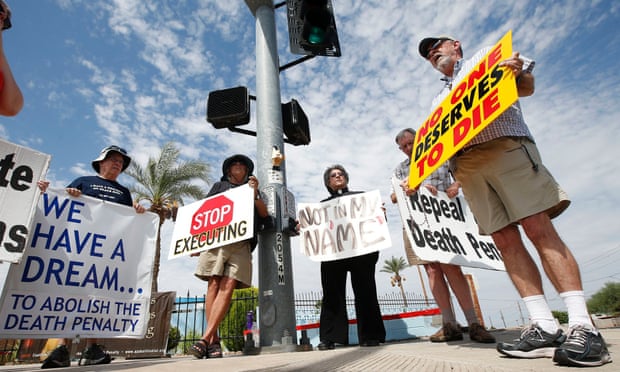 Anti-death penalty campaigners protest outside the prison in Florence, Ariz., where Joseph Wood was executed July 23, 2014.

In the United States, where support for state-sponsored executions has been dropping for the last decade, where fewer people are being condemned to die and where fewer executions are being carried out, it seems extreme that states are now using firing squads or hangings or electrocutions or gas chambers to carry out legal lynchings.

This spring, the state of Arizona prepared to carry out executions with the same gas as the German Nazi regime used. Arizona spent thousands of dollars buying ingredients to execute people with a cyanide gas, Zyklon B, which the Nazis used to murder millions of European Jews, the Roma, LGBTQ+ people, communists and other resistance fighters in concentration camps between 1942 and 1945.

The last time Arizona used its gas chamber was in 1999 to execute Walter LaGrand — the last person put to death by lethal gas anywhere in the U.S. The Tucson Citizen reported “agonizing choking and gasping” during his execution. “He began coughing violently — three or four loud hacks — and made a gagging sound before falling forward.” It took 18 minutes for LaGrand to die.

Christoph Heubner, executive vice president of the International Auschwitz Committee, told the New York Times in a June 2 interview, “For Auschwitz survivors, the world will finally come apart at the seams, if in any place on this Earth, the use of Zyklon B in the killing of human beings is considered again. In their eyes, this is a disgraceful act that is unworthy of any democracy and, moreover, insults the victims of the Holocaust.”

Martin Weiss, Austrian ambassador to the U.S., tweeted: “The death penalty is in and of itself a cruel and unusual punishment. Getting ready to use Zyklon B for executions is just beyond the pale.”

For death penalty abolitionists, all execution methods are horrific, as is the death penalty itself. No state, no government, should be in the practice of killing people. Abolitionists are fighting not only to end prisons, as they are known today, but also to end legal lynchings.

Gloria Rubac is a decades-long activist in the Texas Death Penalty Abolition Movement.