June 6 — For the seventh year in a row, Israeli-owned ships have not been allowed to unload in the Port of Oakland. On June 4, thousands of supporters of the Palestinian struggle conducted six simultaneous picket lines during two work shifts to “Block the Boat.” Members of the International Longshore and Warehouse Union Local 10 honored the picket lines, refusing to work the ship. 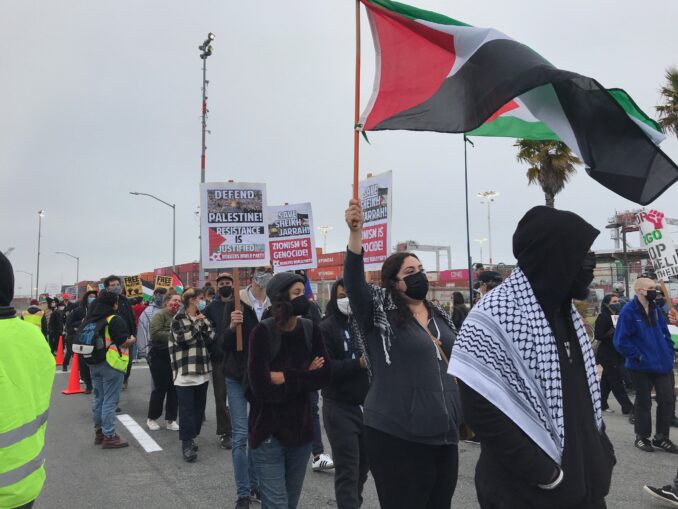 ‘Block the Boat’ action at Port of Oakland, June 6.

In a tremendous victory of worker and community solidarity, the Israeli ZIM-operated ship was forced to leave the port at 6 p.m. — with all of its cargo still on board.

The day of action began when hundreds of demonstrators assembled at 5:00 a.m. to prevent workers from entering the berth where the Israeli-owned ZIM ship had docked. Picketers fanned out to six entrances used by the dock workers.

Members of ILWU Local 10 and other union members stood around in groups, refusing to cross the picket line and talking to protesters. Truckers driving through the Port of Oakland sounded their horns in solidarity with the protest.

The Israeli ship actually left the harbor before the official start of the second shift in the evening — a strong measure of the success and strength of the Block the Boat action.

The solidarity action was organized by the Arab Resource and Organizing Center and supported by many progressive groups in the Bay Area. According to AROC, the blockade of the boat was in direct response to an international call sent out by Palestinian labor unions asking workers around the world to support Palestine by refusing to handle any Israeli goods or cargo.

In a June 6 statement issued by AROC, Elias Al-Jelda of the Executive Committee of the Palestine General Federation of Trade Unions in Gaza, stated: “It warms our hearts in the besieged occupied Gaza Strip and the rest of occupied Palestine that our comrades led by AROC, and with the solidarity of our fellow workers in ILWU Local 10, achieved this great #BlockTheBoat victory against ZIM in Oakland. We call upon all dockworkers worldwide to intensify the boycott campaign against ZIM ships and all business profiting from apartheid.”

In the statement, President of ILWU Local 10 Trent Willis emphasized: “Workers’ struggle is worldwide. . . . When the workers of the world figure that out and realize that we have to band together to make change, then it’ll be a better world, including for the Palestinian people. Worker power, economic power, is real power — it’s more powerful than those bombs Israel is dropping.”

The Oakland Block the Boat protest was part of an international week of actions to prevent the docking and unloading of any ship carrying Israeli goods or owned by Israel. According to the AROC statement, “Oakland and the broader Bay Area have once again achieved a historic Boycott, Divest and Sanctions Movement (BDS) victory for Palestine.”

On the East Coast hundreds of people from the #BlockTheBoat coalition held a first-ever pro-Palestine action June 6 at the Port of New York and New Jersey, against a Zim ship docking in Elizabeth, N.J..