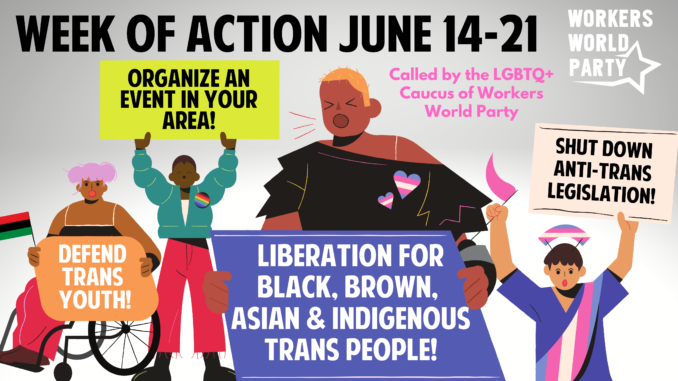 Ezra: According to the ACLU, there have been over 118 anti-LGBTQ+ bills submitted in state legislatures across the U.S. so far in 2021. Most target the transgender community. The bills range from prohibiting heath care for transgender youth to excluding transgender youth from athletics and more, with restrictions couched in religious language. Why is there so much recent legislation targeting young trans people in particular? What can LGBTQ+ organizing in the past teach us about mass response to this violence in the present?

Indigo: When COVID happened, I think most kids were out of school. I feel like the right wing had a lot of time to plan out their next move, to try to see what they could do legislatively against the trans liberation movement. The fact was that everyone was more worried about what was going on with COVID. They had enough time to try to slip bills through. They were slipping bills through in Florida in 2020, but we were counteracting them one by one. But for some of the other states, organizers may not have had the wherewithal to do that.

Here in Florida, we have the “Parents’ Bill of Rights” — where parents can pull children out of class if the kids are learning about African American history, for example, or LGBTQ+ history. If  their kid is in some sort of a queer or trans group, they can find that out now. It’s really invasive and really terrible in our state. We have another bill about sports. That’s one issue where even some liberals don’t follow trans people. When it gets to sports, it’s “Oh, no, the science says . . .” But — no! No. Science says otherwise; science says it’s fine!

What can LGBTQ+ organizing in the past teach us? We look especially to the Stonewall Rebellion in 1969 and other parts of the LGBTQ+ movement like STAR (Street Transvestite Action Revolutionaries). I think it is our thing we do in STRIVE in the Gulf Coast — how we help the community out. Where people come together and try to connect our fight with everyone else’s. And also understand that it’s okay to be different; it’s okay to have that difference.

We know, as trans people, it’s gonna be an uphill battle. It’s not even a question. We need that camaraderie and that combination of how we fight for each other. To try to continue that fight, because it’s really difficult, especially where we are at in the South. It’s just a battle. The thing we need to learn is to continue to be bold and continue to push ourselves to take those risks. Because trans youth — they can’t. They’re in a position where they can’t do that. And we want to be there for them as much as we can. So each step that we take, especially as millennials, helps get them to a place where they can freely take that next step toward liberation.

Devin: Indigo and I have mentioned STRIVE several times now. For the people who don’t know what STRIVE is, let me give a little bit of a background. Indigo and I live in northwest Florida; we’re bordered right up against Alabama and very close to Mississippi as well. STRIVE stands for Socialist Trans Initiative. We are a transgender advocacy organization. We’re the only one of our kind for over 250 miles around. We provide material support to transgender, nonbinary and [Native] Two Spirit people. We provide emergency housing to trans people who are experiencing homelessness; we help people get on HRT [hormone replacement therapy] and pay for that. We help pay for utilities, for food, for transportation. We help pay for any work-related — and that does include sex work — any work-related items that trans people may need to survive. We’re in the rural Deep South, and as we’re the only group of this kind in this area, we take the brunt of all transgender oppression in the area.

So why is there so much recent legislation targeting young trans people in particular? They’re the most vulnerable group. Trans kids are the most vulnerable group. I’m one of those trans people, and I believe Indigo can relate as well. We didn’t come out until we were adults. And there’s no doubt that repression in the education system and in the medical system played some role in that. But now you see many more young trans people emboldened at a much younger age. They’re bold!

I’ll never forget back in 2017, I met a 13-year-old trans guy. He was out; his teachers used his correct pronouns; people respected him — and it blew my mind! I’ll be 27 in about two weeks. So you know, it wasn’t too long ago that I was 13. It wasn’t that terribly long ago. But the thought of doing something like when I was 13 — that is just inconceivable to me.

These kids these days are so incredible and so emboldened and so powerful. This legislation is a direct attack on their autonomy by the capitalist ruling class. It’s easier to attack trans kids legislatively, to try to repress that movement. Florida House Bill 24 that Indigo talked about is the “parents’ rights” bill. The GOP angle is that it gives parents more “insight” into their child’s education and health. That’s a smokescreen. What it really does is give parents almost total control over what their child can learn in school, what their child can do in school and what their child says to their health care provider.

If this bill is signed into law and a young trans child goes to the doctor, with the parents not in the room, and they say, “I think I might be trans; I’m interested in learning more about hormone replacement therapy,” or “I am trans,” the doctor would be legally required to inform the parents. Thus effectively outing the trans child to their parents. If a child comes out to a school worker, to the principal, to the guidance counselor, the school would be legally required to inform the parents that their child has come out.

Oftentimes, if the child has not come out to the parent — and I say this, as someone who grew up in rural Alabama and had a lot of closeted gay friends — when the child comes out to the teacher or to the doctor instead of the parents, it is because the parents are not providing an accepting, affirming household.

So this bill forces the teachers and the doctors to repress these children, these LGBTQ+ youth. It forces them to repress! LGBTQ+ youth are the easiest targets now in the “culture wars.”

And what can LGBTQ plus organizing in the past teach us? It teaches us that the youth are the future. That’s just the dialectic. That’s a fact. The youth will inherit every movement. And at this moment right now, we’re experiencing a revolutionary momentum. This legislation is an attempt to stop these incredible youth in their tracks from the revolutionary momentum that they are building themselves.

I’ve been out of high school almost 10 years; Indigo has been out almost 20 years. This is not our generation anymore. This is Gen Z. And what these youth are doing is incredible. The fact they’re being repressed is symptomatic of capitalism and imperialism in a decaying stage, lashing out at the youth as we continue, and as they continue, to push it further into the grave.

Ezra: I’m part of that younger generation. My comrades and I joke that I was the first Gen Z kid, and I came out when I was 19. But I knew that I was gender fluid at 15, mostly because of having access to the internet. We see a lot of that these days — these kids have access to the internet. They have access to seeing real trans people doing real things and living their life. And they know that that can be them too! I love to see all the kids coming into their own and learning about themselves in that way.

That’s why it’s incredibly unjust that we have these different bills trying to tear them down in their tracks and set them back many, many years. Because — for instance — puberty blockers are not permanent. The effects are reversible. But puberty is not reversible. These attacks are baseless, coming from the right wing to tear down young trans people and try to put out their fire. But it’s not going to work that way!

Because the struggle for trans liberation continues. Another great way to learn more is to check out the writing and life work of Workers World Party Comrade Leslie Feinberg. Ze was a revolutionary communist who put theory into practice every day, advancing the struggles against imperialism, racism, sexism, homophobia, transphobia, ableism, the prison-industrial complex — you name it.

Hir works — from “Transgender Liberation” to the widely influential novel “Stone Butch Blues” to “Rainbow Solidarity with Cuba,” on the LGBTQ+ advances made in revolutionary Cuba — are all sure to raise your class consciousness and inspire you to join in the fight for your own liberation too. You can read more at workers.org/books and lesliefeinberg.net.

Thanks, Devin and Indigo! On to trans liberation!