Flounders took part in a delegation that traveled to Cabo Verde in solidarity with Venezuelan diplomat Alex Saab, who was abducted in June 2020 on orders of the U.S. and held under onerous conditions since then on two of C.V.’s ten islands. Cabo Verde is an archipelago nation, whose population is 560,000, located 400 miles across the Atlantic Ocean to the west of Dakar, Senegal, in West Africa. 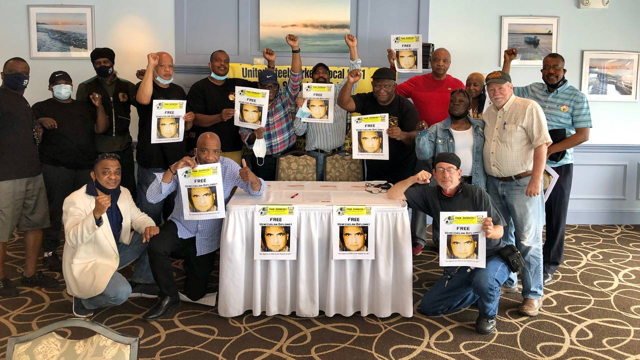 June 5 — Our delegation from the International #FreeAlexSaab Solidarity Committee reached Sal Island June 3, hoping to meet with Alex Saab and his legal team and anxious to put an end to his illegal abduction and torturous confinement and to stop an extradition to the United States that would violate international law and disgrace Cabo Verde’s sovereignty before its allies in Africa.

Our goal was to mobilize support to free this Venezuelan diplomat, who was sequestered on political command by U.S. imperialism. Our additional goal was to establish the facts regarding Saab’s seizure and the unjust and brutal handling of his person and to bring these facts before the world.

Saab’s case is being fought in the Cabo Verde Supreme Court, so he cannot be immediately extradited. But we fear that unless we can bring international pressure on both the U.S. and Cape Verdean governments, Saab will be abducted to the U.S. where he could disappear in the U.S. injustice system.

We have succeeded in gaining media coverage in various African countries and in mobilizing support from the expatriate C.V. community in Boston, especially from the Boston School Bus Drivers Union, United Steelworkers Local 8751, and in bringing this important struggle before the progressive movement in the U.S.

While the Cabo Verde police prevented us from meeting with Alex Saab, meetings with his lawyer in C.V. — Dr. José Manuel Pinto Monteiro — and with Venezuelan ambassador Alejandro Correa Ortega allowed us to establish the true nature of the charges against Saab and how he was treated in captivity. Saab’s own message to the delegation confirmed these results.

Saab was arrested for alleged “money laundering” at a plane refueling in Cabo Verde a year ago, while on his way from Venezuela to Tehran in an attempt to arrange deliveries of  food, medicine and fuel oil for the people of Venezuela. From the discussions we held, we could determine that Saab’s seizure had political roots — no crime was involved — with the U.S. behind the seizure, and that his treatment violated his human rights and diplomatic status.

We met June 3 with Dr. Monteiro, Saab’s lawyer, who moved to Sal Island so he could meet with Saab 40 minutes each day within the total of four hours a week the courts allow.

Besides this writer, others in the delegation included Roger Harris from Corte Madeira, Calif., and two Cabo Verde citizens living among the large expatriate C.V. population of New England, Bishop Felipe Teixeira and Pericles Tevares.

Dr. Pinto confirmed to us Saab’s description of torture carried out by two people with U.S. American accents, who put a bag over his head and threatened his life during harrowing night visits. They cut his wrist with a knife on three different occasions, demanding he sign an agreement of extradition.

During the period of confinement, Saab was held for seven months of darkness, 23 hours a day, in a bare concrete cell. It was hard to keep from screaming at these facts.

And in addition, Saab, who has cancer, has been prevented from seeing his oncologist the entire time he has been in prison.

We also met June 3 with Alejandro Correa Ortega, Venezuelan ambassador to Cabo Verde. Correa confirmed that when Saab was arrested — based on an Interpol order of June 12, 2020 — within three hours of the arrest, Venezuela made official notification to C.V. officials of Alex Saab’s diplomatic immunity.

Saab was originally held in a cell on Saint Vincent Island and was moved to Sal Island a week later. Correa was first allowed to meet with Saab June 20, eight days after his seizure, and then not until July 20. Later efforts to meet with Saab were denied.

It was outrageous both to deny Saab, himself a diplomat, these visits and doubly illegal to prevent visits by the Venezuelan ambassador.

Like Saab’s attorney, Correa confirmed that Alex described to him the torture, night visits and the rest of the treatment that violated his human rights.

In our attempt to visit Saab, we went to two different police stations to meet with the police chief and gain permission to visit. In both cases we were given runarounds. We then attempted to send a recording from our delegation.

From the street near the building where his kidnappers are holding Saab, you can see that he is surrounded by military police and security with automatic weapons, including snipers on the roof. They grabbed this writer’s phone briefly, with its camera, but photos were able to be saved.

It is obvious Saab is imprisoned and being held by force on Sal. He is allowed no movement, and our visit was prohibited. It was important to establish his imprisonment, as the C.V. courts denied suits for habeas corpus, falsely claiming that Saab was only held under house arrest.

He has no access to the internet or phone. He was, however, able to send us a note that he heard of our delegation.

“My brothers and sisters, I cannot tell you how touched, how moved and how eternally grateful I am for your support and your expressions of goodwill. . . .

“I can only hope that President Biden and all his advisors and especially the people of the DOJ [Department of Justice] are watching and finally waking up to the devastation their illegal sanctions and political blockade have perpetrated against the good people of Venezuela.

“I am a lawfully appointed diplomat, as you have acknowledged. My detention is illegal and arbitrary by any reading of international law, and this has been further confirmed as so by the ECOWAS regional Court of Justice on March 15. [ECOWAS is the Economic Community of West African States.]

“Disappointingly, Cape Verde has chosen to ignore the binding ruling of the ECOWAS court, as well as the fact that the court has jurisdiction to deal with the matter. The fact that Cape Verde now wishes to renege on international treaties to which it has signed should be a warning to all future investors in the country and anyone thinking that Cape Verde is a stable long-term partner. . . .”

The delegation’s visit led to media coverage in Ghana (ghanaweb.com), Cabo Verde (affairstv.com), Nigeria (platformtimes.com.ng, citimirrornews.com), and other countries, including Portugal and Spain, and in the Orinoco Tribune of Venezuela (orinocotribune.com).

The trip coincided with a petition campaign being promoted internationally and especially in the U.S. Please take less than a minute and sign the petition: bit.ly/FreeAlexSaabVZ.