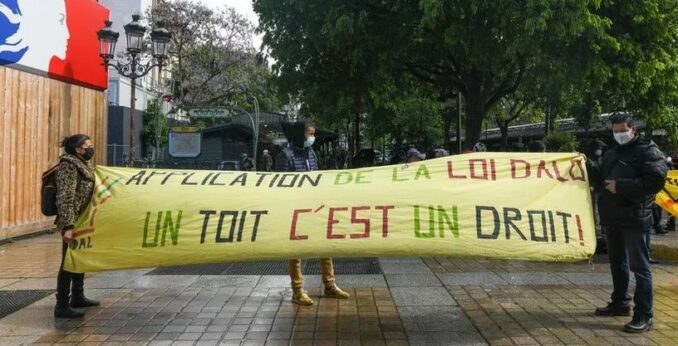 In France, activists hold a banner saying “A roof is a right”

According to the French housing alliance Right to Housing (DAL–Droit au Logement), cops are prepared to evict 30,000 families starting June 1. Some 130,000 families have been notified that they need to leave their homes immediately, while tens of thousands could have their electricity shut off any time after June 1. France has more than 300,000 homeless people out of a total population of around 67.4 million.

June 1 is when the winter’s suspension of evictions and shut-offs expires.

The General Confederation of Labor (CGT), along with Right to Housing, the feminist collective Fasti, formed to defend immigrant rights, and Paris d’Exil, an NGO focused on welcoming exiles, formed a coalition in March and called major demonstrations in 31 French cities under the slogan: “A roof is a right.” These demonstrations were coordinated with actions in other European countries and endorsed by many progressive unions, associations and political parties, including the Greens and the Communist Party of French Workers.

The CGT is the second-largest and oldest union in France, with a militant history of defending workers’ retirement rights and unemployment insurance, on the job, in the streets and in the political arena.

The program of this coalition is simple: decrease rents, increase investment in public housing and end evictions and removals. They point out that state assistance for lower-income individuals needs to increase and that officials who carry out an eviction are responsible for finding new housing for those evicted. In some cities they have set up large numbers of tents for the homeless.

The way the French government has responded to the COVID-19 pandemic sharply increased the profits of landlords and real estate investors.

The DAL and the CGT, through posts on their web pages and Facebook, managed to organize a number of small but significant demonstrations May 29 and 30 in Paris, as well as in Lille, Bordeaux, Lyon, Toulouse, Marseilles and other cities.

While French politics places a great deal of emphasis on protests, demonstrations and marches, the elections — especially for president — are also important. The next French presidential election is still 11 months away, tentatively scheduled for April 23, 2022, and the housing crisis is going to be a major issue.

Even France’s far-right party, the National Rally (RN, Rassemblement National), has declared the housing crisis a major problem for France. Its proposed solution takes up nearly nine pages and contains a lot of tweaks — such as making the purchase of real estate cheaper and providing low-cost loans to young people, encouraging them to buy public housing — which would give the public housing authorities the capital to produce more public housing. The RN proposals exclude non-French residents.

The RN and some voices in the corporate English-language media elsewhere, like the New York Times and BBC, are predicting that the RN could win in next year’s election, that it could break through the barrier erected by France’s two rounds of voting. But to get to the second round, this far-right party would have to do better than the French left.