Many thousands of people demonstrated for Palestine May 29 in Washington, D.C., calling for a end to U.S. aid to Israel and a global grassroots campaign to #SanctionIsrael for its unrelenting violation of Palestinian rights and occupation of Palestinian lands. The protest was called by American Muslims for Palestine and the U.S. Council of Muslim Organizations, and it was endorsed by more than 100 organizations of diverse constituencies. 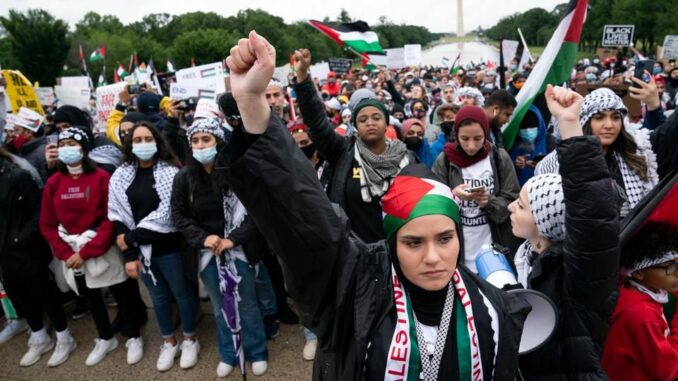 A massive crowd rallied for Palestine at the foot of the Lincoln Memorial in Washington, D.C., May 29.

As people converged on the Lincoln Memorial, speakers demanded the U.S. government sanction Israel for its deadly attacks on Palestinians, including the war crimes committed during its latest attack on Gaza. During the Israeli May 9-20 military assault, at least 254 Palestinians were killed, including 66 children and 39 women, and 1,910 were wounded, according to the Health Ministry in Gaza.

Rockets of the Israeli forces — fired from the protection of the “Iron Dome” funded by the U.S. — wreaked massive destruction on the already devastated infrastructure of Gaza. The Biden administration is currently proceeding to license $735 million in weapons sales to Israel, despite public outcry as well as unprecedented opposition from some members of Congress.

Jinan Shbat, national organizer for the Arab-American Anti-Discrimination Committee (ADC), noted the significance of pro-Palestine actions in the U.S. in terms of the size and diversity of a crowd that included Jewish, African-American and other ethnic and religious groups. “For so long, our tax dollars have funded the ethnic cleansing of the Palestinian people,” she said. “We came today so we can say it loud and clear to this administration that we as Americans will no longer be complicit in funding these atrocities.” (Arab News, May 30)