Being a recovering liberal, May 2021 might have possibly been the most important month in my entire life. Seeing revolutionary theory put into practice by attending a rally on May Day and the #SaveSheikhJarrah rally May 15 has really inspired me to invest more deeply into political organizing. 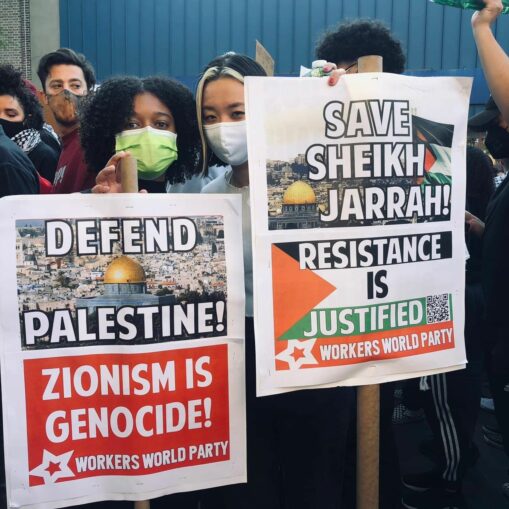 Protest for Palestine in Brooklyn May 15. Credit: Toni Arenstein

The May 1 events enabled me to get a first-hand view of how the capitalist system affects the lives of the working class, young and old. Witnessing speakers from all walks of life talk about how the U.S. economic system has wrecked their lives really hit home to this recent college graduate, who has to pay the bills by working in the service industry.

As great as the May 1 event was, it seemed to be missing something. The problem was that I didn’t know what, until I attended the #SaveSheikhJarrah rally two weeks later.

While hearing stories from the U.S. proletariat was necessary for my political development, I needed to hear the class struggle from beyond the borders of the wealthiest country in history. I needed to witness the fervor and passion of activists resisting the clutches of U.S. imperialist hegemony. I found this at the rally for Palestine on May 15.

Marching from Rittenhouse Square all the way to the Philadelphia Art museum, along with thousands of other people, inspired me to be the best ally I could possibly be for the oppressed and marginalized, not just in the United States but all over the world. Starting with #SaveSheikhJarrah and Palestine liberation as a whole, I will use my privilege as a Western leftist living in the imperial core to extend my solidarity to all people seeking self determination.

By reading articles and listening to videos by Palestinian activists, I learned several ways to be a great ally to the Palestinian cause. The first one is to boycott corporations and companies that are complicit in Israel’s oppression of Palestinians. The sad part about companies like Ben and Jerry’s, HP, Puma and Sabra is that they spent the past year exploiting righteous outrage at the uptick of state-sanctioned violence against Black and Brown people in the U.S. — while aiding state-sanctioned violence in the Gaza strip. They were doing business with companies that are bankrolling the Israeli army, creating a biometric ID system that Israel uses to restrict Palestinian movement, or they were just looking the other way while Palestinians are being oppressed daily. (tinyurl.com/7xdxxwkc)

We can’t allow these charlatans to get away with continuing their exploitation of people outside U.S. borders by downplaying their exploitation within U.S. borders. Now that the younger generation is starting to realize the realities of systemic oppression, it can send a real message to the capitalist class by hitting them where it hurts the most: their pocket books.

Another way to be an ally is by boosting the voices of Palestinian people. As a major backer of the Israeli state, the U.S. and its media outlets have a vested interest in painting Israel in the best light possible while demonizing the Palestine Liberation Organization, Hamas and other Palestinian leaders.

With that kind of biased reporting, I myself once bought into the lie that Palestinans were a dangerous threat to Israel’s peaceful settlement. Palestinian voices are not only being silenced through the press, they’re being silenced on the ground: Since 2000, the state of Israel has been responsible for the murder of 46 Palestinian journalists. With the whole world watching, Israel bombed a building housing at least 17 local and international media outlets, including Al-Jazeera and The Associated Press, in Gaza City May 15.

With all this violent repression, Palestinians are fighting an uphill battle to get their voices heard. What you can do as leftists in the U.S., or in the West in general, is feature the reporting and work of Palestinian journalists as much as possible. And it is extremely important to find Palestinian content creators and boost their visibility as well by giving them a shout-out whenever you can. With more respresentation in the mainstream, Palestinian authors, journalists, creators, etc. will be afforded the ability to showcase themselves and their humanity and with this visibility win more people over to their vital struggles.

In addition to amplifying Palestinian voices, it is important for us as Western leftists to fight back against bad-faith propagandists anywhere and in any way we can. With the future of Palestinian communities like Sheikh Jarrah hanging in the balance, we can’t afford to have irrelevant squabbles over political ideologies. What is important is making sure the fallacious fearmongering of the Ben Shapiros, Richard Spencers and Michael Knowles of the world isn’t affecting popular opinion and discourse about the struggle for Palestinian liberation.

We must be intrepid in our stances and bold in our dismantling of spurious assertions about Israel’s alleged victimhood. This present moment is an opportune time for leftists and revolutionaries of various persuasions to unite and rally behind a noble and just cause.

Lastly, we need to contribute materially to the survival of Palestine and its people. In addition to spotlighting Israeli voices, the U.S. has been contributing to the settler-colonial project known as Israel for a long time. As of 2020, the U.S. has provided Israel with over $146 billion in military, economic and  missile “defense” funding. Adjusted for inflation, this amount is equivalent to $236 billion in 2018 dollars, making Israel the largest cumulative recipient of U.S. assistance since World War II. (tinyurl.com/c9vcud9b)

In contrast, Palestine is coming off debilitating sanctions that have left it with an unemployment rate of 52% and a poverty rate of around 53%. (nbcnews.com, May 1, 2019) With such dire circumstances facing Gaza residents, it is necessary for workers in the imperialist countries, who are better off by comparison, to contribute financially to the Palestinian cause to the best of our ability.

Even if we don’t have the discretionary income to donate, we can certainly boost Palestinian organizations that are in need of assistance. It is important, however, that we donate exclusively to communities and organizations led and run by Palestinians themselves. Just like with the Black Lives Matter movement that picked up steam last year, there will be companies, corporations and other like-minded actors who will exploit the Palestinian cause for their own fame and wealth. Always make sure you know exactly whom you’re donating to and which charities and organizations you’re boosting.

If we all do our due diligence, we can do our part in giving Palestinians the  support they need in order to continue their valiant fight.