As we head into Pride month 2021 — after more than a year of being locked down due to the COVID-19 pandemic — we are still plagued by twin epidemics of rampant racist police terror against the Black and Brown communities and U.S.-armed Israeli bombings and murder of Palestinian people in the West Bank and Gaza. 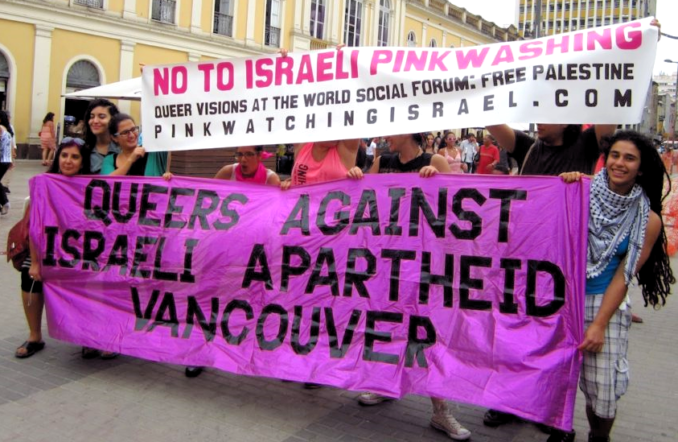 As the LGBTQ+ Caucus of Workers World Party, we call upon all of our siblings in this movement to demand “Cops and Colonizers Out of LGBTQ+ Pride!”

While the COVID pandemic confined us in our homes this past year, it did not stop the police terror or victimization of Black, Brown and Indigenous people in the U.S. We witnessed the Louisville, Ky., police murder of Breonna Taylor, a Black woman who was an emergency medical technician at the beginning of the pandemic. And this week, we commemorate the one-year anniversary of the assassination of George Floyd, a Black man, by Minneapolis police. Tony McDade, a transgender Black man, was killed by the Tallahassee, Fla., police shortly after Floyd was killed. The police terror against Black and Brown people continues at an alarming rate as we enter this year’s Pride month.

The U.S. government, not content with its war at home against Black, Brown and Indigenous people, exports police terror abroad. We are sickened by the continued occupation of Palestine by Israel, which is armed and supported by the U.S. In fact, while Israel was bombing the West Bank and Gaza, during the end of Ramadan and the beginning of Eid, two Muslim holy days, the U.S. Congress was approving over $700 million in arms to Israel, widely recognized as a settler-colonial state. Over 243 Palestinians, including 66 children, were killed by Israeli terrorism during its recent attacks.

This year’s Pride marks the 52nd anniversary of the great Stonewall Rebellion — which was a militant uprising, led by working-class transgender youth and drag queens of color, against police brutality and oppression. The most marginalized and oppressed of the LGBTQ+ community rebelled against a police raid on the Stonewall Inn in New York City, June 28, 1969. The transgender community in the Tenderloin neighborhood of San Francisco had previously rebelled against police oppression and raids in August 1966, in the Compton’s Cafeteria Riot. The LGBTQ+ movement was born out of these actions against police terror.

In 2015 the Williams Institute reported that 48% of LGBTQ+ victims of violence experienced police violence. In 2015, the same institute reported that 58% of trans people said they were victims of verbal harassment, persistent misgendering, physical and sexual assault, and forced to perform sexual acts to avoid being arrested. Of course the groups most affected by police violence within the community are Black and Brown LGBTQ+ people. Unarmed Black people are 3.49 times more likely to be killed by the police compared to their white counterparts.

It is critical that we live up to our heritage of resistance and stop police violence against our community. It is high time that all cops be kicked out of Pride, whether events are virtual or in person. No police of any kind — including police officers, members of the FBI or other federal police agencies, Immigration and Customs Enforcement or prison guards — should be allowed to participate in Pride activities. We applaud the actions of New York City’s Heritage of Pride organizers who banned uniformed police and security from all events this year and through 2025. We challenge all Pride organizers to ban any participation of these purveyors of racist violence.

We urge all Pride organizers to terminate any connection with colonizers, including the Israeli Consulate, and to take a strong stand against U.S. support for the continued occupation of Palestine. LGBTQ+ Pride should fully embrace the Boycott, Divest and Sanctions movement against Israel.

This Pride, let us demand an end to racist police terror, not only in the U.S. but across the globe. Stonewall must once again commemorate and inspire continued rebellion against U.S. racism and U.S.-backed oppression everywhere.