The whole world is watching in horror as Israel bombs Gaza. As of May 17, the Zionist state has killed nearly 200 people, 58 of them children. With military precision, Israel’s bombs are aimed at civilian targets, family homes, refugee camps, hospitals and schools.

Israeli missiles razed to the ground a famous building that provided residential housing, doctors and lawyers’ offices and international media offices, which was the base of support enabling AP and Al-Jazeera journalists and photographers to capture the reality of life in Gaza. Israel has now destroyed the largest three buildings housing media in the Gaza Strip. The message is clear: Israel does not want the truth publicized about their vile crimes against Gaza’s people, nor the carnage seen.

Israel is intensifying its war on the Palestinian people and trying to eliminate all resistance to its expansionism and apartheid state, which legally denies equal rights to the region’s Indigenous inhabitants. Its murderous military campaign exposes the Zionists’ contempt for Palestinian lives and its anti-Arab, anti-Muslim racism. Meanwhile, Zionist settlers are stealing Palestinian families’ lands, and forcing them out of their homes and farms. 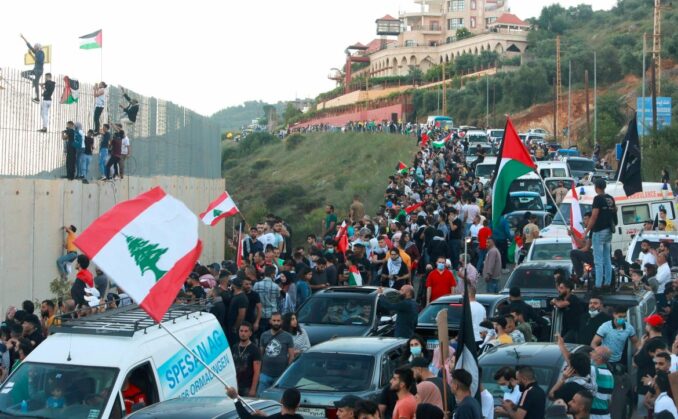 At the Lebanese-Israeli border

However, Palestinians and other Arab and oppressed peoples, Muslims, anti-Zionist, anti-racist and anti-war activists are loudly protesting Israel’s crimes. They are decrying the Zionist attacks on the Al-Aqsa mosque and the genocidal bombings. And they are rallying in solidarity with the Palestinians of Gaza, the occupied West Bank and the Sheikh Jarrah neighborhood in East Jerusalem, under deadly siege by the Zionist state and settlers.

Hundreds of thousands of people around the world protested Israeli apartheid and war crimes May 14 through 16. And Washington’s financial and political backing of the Zionist state was condemned. Activists were inspired to demonstrate by the heroic Palestinian Resistance. Here are some highlights of these actions.

Many actions took place on May 15, Nakba Day, a yearly commemoration of the forcible removal of 750,000 Palestinians from their homes in 1948. The state of Israel was formally proclaimed May 14, 1948.

Demonstrations were held in the occupied West Bank on both days. In Ramallah, a siren sounded for 73 seconds on Nakba Day, symbolizing the years since the “Day of Catastrophe.” Protests were held in Nablus and other towns and cities. The Palestinian Resistance was mobilized; however, Israeli soldiers retaliated and fatally shot 10 Palestinians.

Palestinian flags flew at rallies in Baghdad and cities in Iraq’s southern provinces of Babylon, Dhi Qar, Diwanieh and Basra, in solidarity with Gaza’s people. 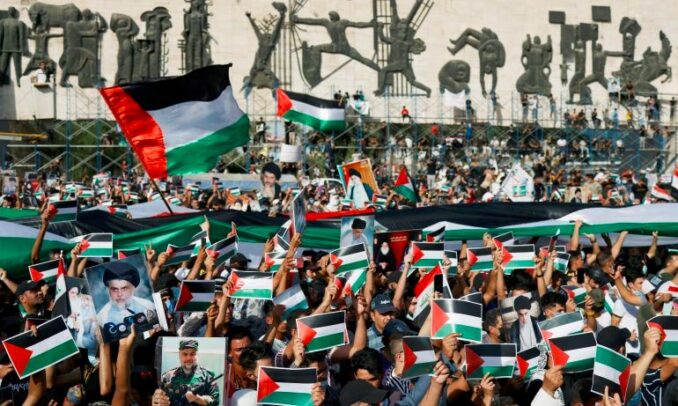 Hundreds of people went to South Africa’s Parliament in Capetown to denounce the Israeli bombardments. Zwelivelile “Mandla” Mandela, African National Congress MP and grandson of anti-apartheid hero and former President Nelson Mandela, called for closing the South African Embassy in Tel Aviv and reopening it in Ramallah, Palestine, in solidarity. 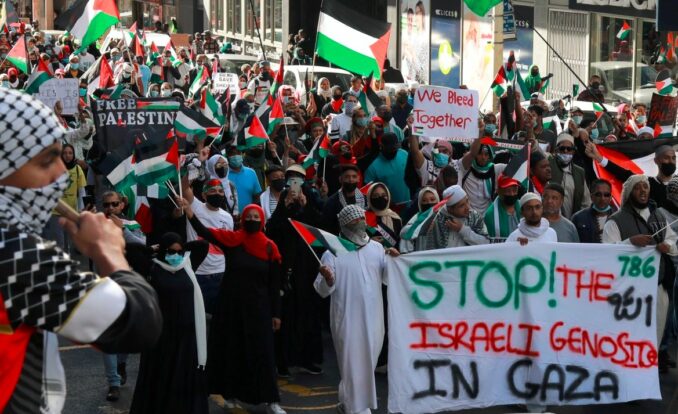 Organizers say 150,000 people denounced Israel’s atrocities at a London, England demonstration, holding signs saying “Free Palestine!” and “This is apartheid.” Speakers condemned Britain’s historic betrayal of the Palestinian people. Some  5,000 people attended a Manchester rally. Protests were held in 80 cities in Britain, including Glasgow and Edinburgh, Scotland, and Cardiff, Wales. 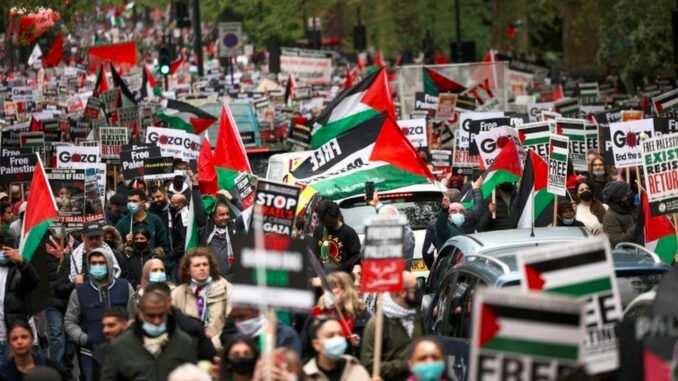 In Madrid, Spain, 2,500 demonstrated, and the youth wrapped themselves in Palestinian flags. They all made their way to Puerta del Sol.

Hundreds bravely rallied in the Barbes neighborhood in Paris, despite a ban on protests. Police fired tear gas and water cannons at them and arrested 44 people.

Thousands rallied in three locations in Berlin and at actions in Frankfurt, Leipzig, Hamburg and Stuttgart, Germany. In the Berlin district of Neukölln, protesters burned Israeli flags and pummeled police with bottles, stones and fireworks. Officials tried to ban some protests, falsely charging anti-Semitism.

In Canada, 5,000 people participated in an action in Toronto, organized by the Palestinian Youth Movement. Thousands assembled in Montreal, where police attacked pro-Palestinian activists. Other actions were held in Ottawa, Vancouver and Winnipeg. 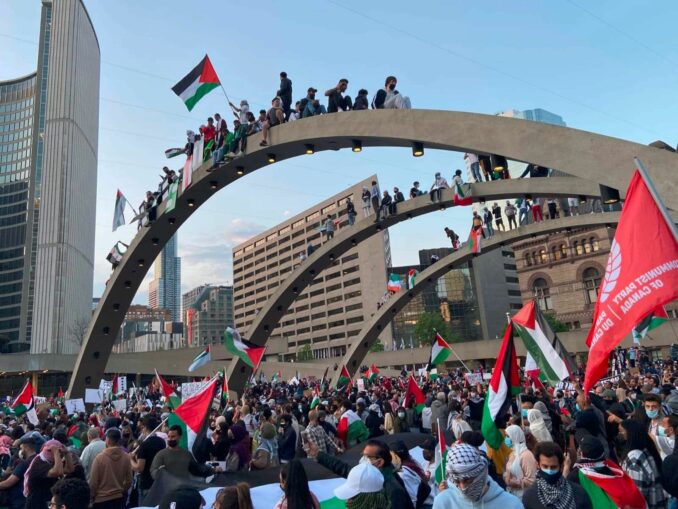 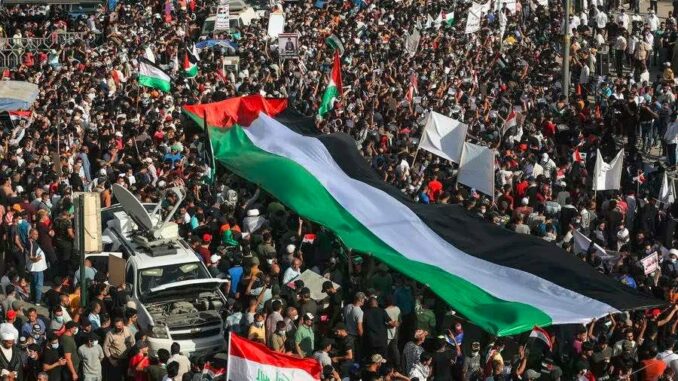 Free Palestine rallies held in Melbourne and Sydney, Australia, attracted thousands of people. And there were 10 rally sites in New Zealand. 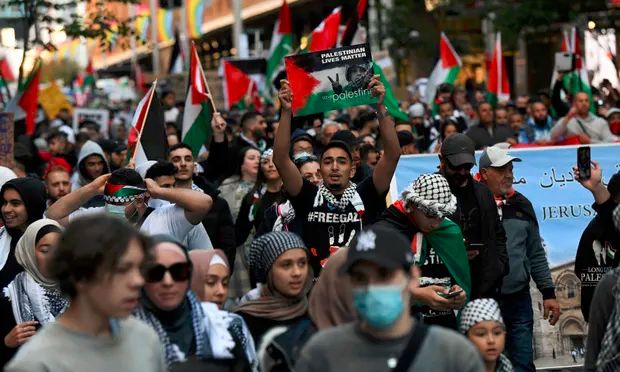