On the eve of his 96th birthday May 19, the great Black revolutionary, Malcolm X, will always be remembered for the quote: “By any means necessary.” He used this phrase to justify Black people having the right to defend themselves from all forms of white-supremacist violence, including by use of arms.

Both of these powerful statements are applicable to the genocidal terror currently happening in Gaza. Workers World Party defends the the right of the Palestinian people, as an oppressed and exploited people, to rebel against the racist Zionist regime of Israel “by any means necessary.” Our view has not wavered one iota since the Party held its first pro-Palestine demonstration in 1967.

This self-determination includes the Palestinian masses having their choice of political representation — which in Gaza has been Hamas since 2006. For decades,  Palestinians have faced two oppressors — the fascistic Israeli occupiers who violently displaced them from their homeland May 15, 1948, with horrific massacre — and the top backer of Israel, U.S. imperialism.

Yes, it is the duty for anyone who considers themself to be a revolutionary and socialist inside any superrich capitalist countries to demand that all aid be severed from propping up Israeli apartheid in Palestine. That is an important step towards building anti-imperialist solidarity.

This garrison state could not exist for one day if it weren’t for the $10 million the U.S. administration provides daily, amounting to almost $4 billion annually. This support reflects why Israel has been an illegitimate state since its inception. It uses a false cover of being a “Jewish state,” but in reality it is a Zionist state built on the blood, sweat and tears of the Palestinian people.

Zionism is a white-supremacist ideology used to dehumanize Palestinians and all Arab peoples. This racist, white, settler state was codified with the Balfour Declaration by British colonialist settlers on Nov. 2, 1917. Malcolm X equated Zionism with colonialism in September 1964. 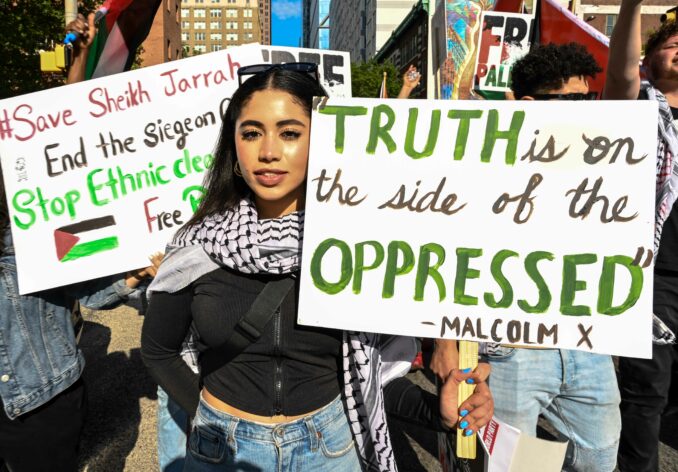 Palestinian solidarity protest in Philadelphia, May 15

What has happened to the displaced Palestinian people — be they in the Occupied Territorities of Gaza and the West Bank or throughout the diaspora — can be compared to what happened to the thousands of original nations in this hemisphere during the wholesale theft of Indigenous lands starting with Christopher Columbus. The difference is that Britain’s genocidal theft of North America led to the establishment of the world’s most powerful imperialist country, which today profits from the oil-rich region in East Asia or the “Middle East.”

To be anti-Zionist is NOT the same as being antisemitic. The U.S. government’s support of Israel is not based on genuine support for Jewish people. In fact, antisemitic attacks are everyday occurrences in the U.S. and included the closing of its borders to a certain number of Jewish people attempting to escape the Holocaust during, and before, World War II. This imperialist maneuver was an effort to divert Jewish people to settle Palestine — to turn them into occupiers before 1948.

The Palestinian people have had no other choice but to fight back against their oppressors, using everything at their disposal — from slingshots to rockets against the Israeli Defense Forces, which are trained and armed with the most sophisticated weaponry supplied by the U.S. Defense Department.

The heroic resistance shown by the Palestinians has helped to further isolate the already ostracized Israeli regime — especially since the first Intifada or uprising that began in 1987, followed by the second Intifada in 2000. This is why it is critical for movements to demand an immediate end to the bombing of Gaza and ending all U.S. aid to Israel — and to defend the right to self-determination of the Palestinian people to win their liberation “by any means necessary” — which will weaken imperialism everywhere.