The genocidal bombing of Gaza by the U.S.-backed Israeli Defense Forces, which began May 10, has entered its second week. This latest assault was sparked in Sheikh Jarrah, a neighborhood in East Jerusalem where neighbors were trying to stop the illegal evictions of Palestinian families by racist, Zionist settlers. At the same time U.S.-trained Israeli police raided Jerusalem’s Al-Aqsa Mosque, during Eid Al-Fitr prayers signaling the end of Ramadan for millions of Muslims around the world. 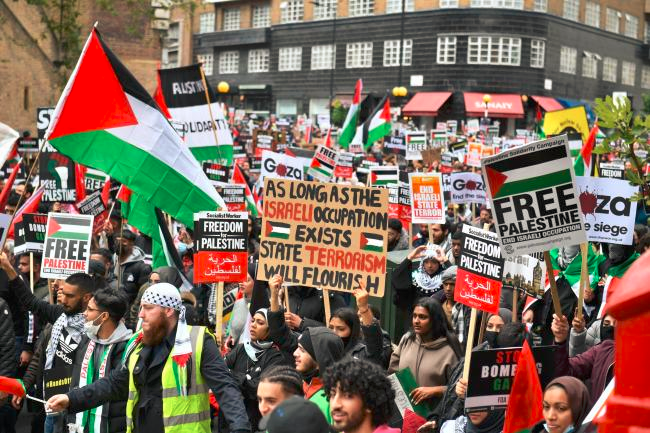 Solidarity protests took place around the world. Here in Scotland, May 15.

According to the Washington Post, 54 Israeli jets carried out 35 airstrikes in Gaza after midnight May 17, claiming to target Hamas military bases and their leaders. These strikes have leveled numerous buildings housing families, as well as a mattress factory and the building containing the offices of the Associated Press and Al Jazeera. The most recent bombing killed 42 Palestinians in just 20 minutes.

In the week before the May 17 bombing, an estimated 200 Gazans were killed including 60 children. There are desperate pleas for blood donations from the already understaffed and besieged health facilities in Gaza already dealing with the coronavirus, where many of the over 1,000 injured will suffer and die from unattended wounds. There is no safe place to hide from this Israeli onslaught; Gazans attempt to flee, but even overcrowded refugee camps have been attacked. Hunger is at an all-time high.

Fifteen Palestinians on the West Bank lost their lives at the hands of Israeli soldiers during a solidarity protest with Gaza. The Palestinian people continue to be dehumanized and treated as collateral damage, as the Israelis hope to turn Gazans against Hamas, their elected representative.

The Biden administration has shamefully supported Israel’s right to “defend itself,” as the U.S. continues to prop up the murderous Israeli regime with $3.8 billion annually in military aid. Just think of the relief that amount could bring to millions of people in the U.S. suffering from unemployment, hunger and the threat of evictions spurred by the pandemic, instead of repressing and occupying a whole nation.

People from around the world, including across the U.S., are coming out in the streets in solidarity with the heroic people of Palestine. Israel is becoming more and more hated and isolated. Hundreds of thousands of people demonstrated on Nakba (Arabic for catastrophe) Day, commemorating May 15, the day that Palestinians were violently displaced in 1948 from their ancestral homeland through the establishment of Israel by British and other western imperialists — in order to control the oil-rich region known as the Middle East.

Besides street actions, other forms of solidarity have taken place. Italian port workers in Livorno, near Tuscany, have refused to load an arms shipment to Israel.  L’Unione Sindacale di Base (The Union of Grassroots Unions) stated, “The port of Livorno will not be an accomplice in the massacre of the Palestinian people.”  (The New Arab, May 15)

The Samidoun Palestinian Prisoner Solidarity Network has called for a “Day of Action in Solidarity with the Palestinian Uprising and General Strike” May 18. The call reads in part: “As Israel is continuing its massacres in Gaza, its attacks in Jerusalem and settler-mob violence throughout occupied Palestine from the river to the sea, Palestinians have called for a general strike!” (tinyurl.com/bzrw4uya)

As Susie Abulhawa, a Palestinian writer and activist, told WW: “What has been happening to Gaza over days is only news because Gaza is defending itself from U.S.-backed Israeli attacks. There is not a day that goes by when some kind of violence is not visited upon the people of Gaza or any other part of Occupied Palestine which does not get reported by mainstream sources. There is not an equal sign between defending oneself with firing rockets from the ground against powerful airstrikes, but even all of Israel’s powerful weaponry has not and will not stop the people’s resistance.”