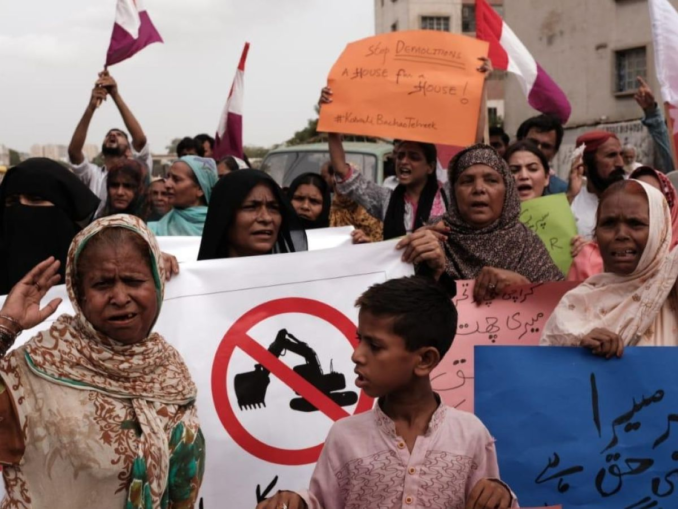 Abdul Hafeez, a member of Sindh Indigenous Rights Alliance, informed the newspaper “Dawn” that guards and police attempted to destroy crops with bulldozers in Kamal Khan Jokhio Goth. Community members responded by engaging in acts of resistance against the intruders. After one person threw a stone at Bahria Town personnel, guards began shooting at the villagers.

Indigenous activist Shaukat Khaskheli was shot, yet law enforcement took him to a police station rather than a hospital. Other villagers were kidnapped and tortured by Bahria Town guards for their acts of resistance and their refusal to allow Bahria Town to rob them of their land. (Dawn, May 9)

The Pakistani ruling class’s ongoing war against poor workers is centered on promoting corporate marketability and modernization. One of their most blatant attacks on the working class was its 2019 campaign to remove so-called “encroachers” from occupying “illegal” structures. Around the time that the anti-encroachment program was put in place, about 30% to 40% of Karachi’s economy consisted of informal markets catering to commuters and tourists, which provided livelihoods for about 2 million people.

However, that did not stop government officials from demolishing people’s businesses and homes. At Empress Market, one of the most well-known markets in Karachi, at least 1,700 shops and stalls were destroyed during the anti-encroachment drive.

A March 2019 report exposed the following information: “3,575 shops have so far been demolished, directly affecting no less than 17,500 workers, if we assume on an average five people tied to each shop. The number of affected people soars to 140,000 on the assumption that each worker has seven dependents.” (Dawn, March 12, 2019)

The rampage against workers continues, even during a global pandemic.

In February, the Karachi Metropolitan Corporation (KMC), the entity that oversees the anti-encroachment drives, announced it intended to begin a new drive near the Orangi Nala and Gujjar Nala — small ephemeral streams in Karachi. KMC claimed that the evictions of an estimated 14,000 homes and 3,000 commercial units was necessary to widen the drains, so that they could improve the “smooth flow of rainwater,” especially during floods. (Samaa TV, Feb. 25)

However, there were more insidious motives for removing workers from their livelihoods and homes.

People’s attorney Abira Ashfaq disclosed that forced evictions are conducted to transfer land management rights “to construction companies and the World Bank so that they [can] profit off it.” (The News International, Mar. 22) KBT’s research advisor Fizza Qureshi discovered that the data that KMC used to justify its pursuit of robbing the working class was faulty.

In reference to the Gujjar Nala, “the recent urban floods in Karachi were not caused by Gujjar Nullah [drain], but rather due to gated communities and large plazas that had been constructed on river deltas and which catered exclusively to the elite.”

Across the border in India, inhabitants continue to suffer from immense trauma and violence caused by legal and extralegal mechanisms used to profit off of the COVID-19 pandemic. Along with structural violence including vaccine apartheid, people in India continue to face the threat of forced evictions.

Last year, over 20,000 people were evicted between March 16 and July 31, despite court orders that banned evictions during the COVID lockdown. Currently in India, 15 million people face the possibility of getting evicted.

Under capitalism, workers will continue to suffer because this system will not and cannot provide the infrastructure necessary to ensure the well-being and safety of all workers. Capitalism kills. Its effects are clearly evident in the ruling class’s overt acts of terror against workers.

Forced eviction campaigns taking place in India leave people vulnerable to mandatory removal at practically any time. In each situation, the ruling class only wants one thing — profits. The pandemic and forced evictions will continue to primarily affect workers. We must build international solidarity and resistance against the ongoing attacks on our class.