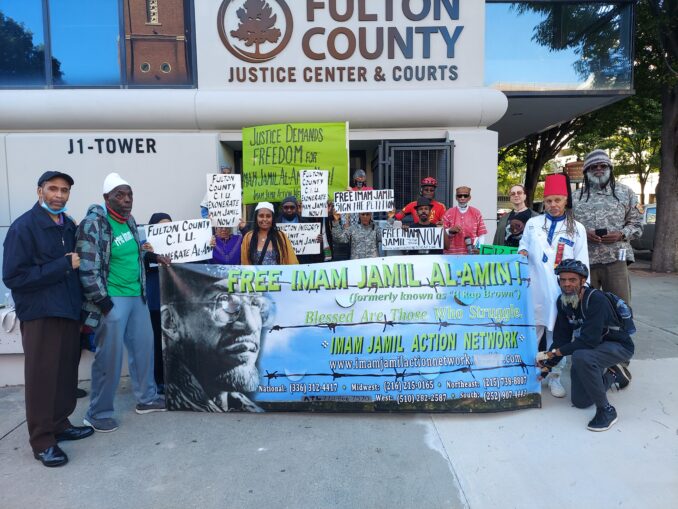 In front of Fulton County Courthouse, May 7.

Supporters of Imam Jamil Al-Amin (formerly known as H. Rap Brown) took the campaign to gain freedom for the Black liberation fighter to the Fulton County Courthouse Friday, May 7, in Atlanta. This downtown building houses the office of the District Attorney and the staff of the Conviction Integrity Unit, which is able to examine past prosecutions and determine if there was misconduct or errors made in the course of the investigations and trials. Upon review, the CIU can order a new trial or exonerate a falsely convicted person.

Al-Amin was charged with the murder of a Fulton County deputy and the wounding of a second on March 16, 2000. Two years later, at a trial replete with unconstitutional actions of the Fulton County legal team, judicial error, the questionable role of the FBI and the admission of faulty evidence, he was convicted and sentenced to life plus 35 years in prison.

The members of the Imam Jamil Action Network held down the four corners of Central Ave. and Martin Luther King Jr. Drive during the busy Friday rush hour with banners and signs, demanding his freedom. Many drivers honked and put their fists up in solidarity.

Thousands of signatures have been submitted on a petition to the Conviction Integrity Unit to provide justice for Al-Amin.

More information on the numerous legal errors and government misconduct in his trial can be found at WhatHappened2Rap.com and ImamJamilActionNetwork.org.