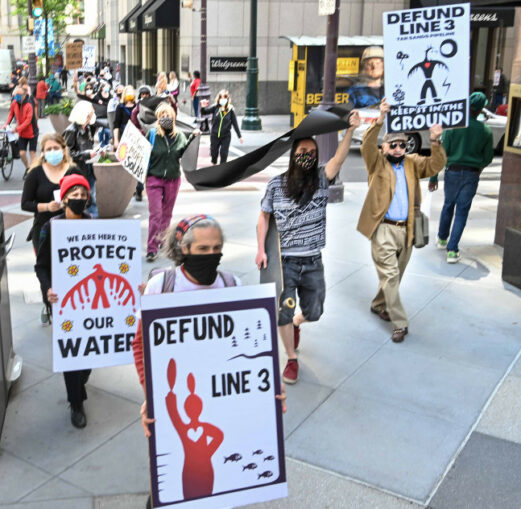 A 35-foot-long black paper scroll was carried by participants symbolizing the oil pipeline. At the end of the demonstration, participants tore it up, “killing the corporate snake!”

Since 2014, thousands of people have organized in their communities in Minnesota and Wisconsin and shown up at hearings to oppose Line 3. All pipelines spill, often at great cost to the surrounding environment and community.

Enbridge was responsible for the July 2010 Kalamazoo River oil spill when the company’s Line 6B pipeline burst and flowed into Talmadge Creek, a tributary of the Kalamazoo River. A six-foot break in the pipeline produced one of the largest inland oil spills in U.S. history.

Opponents on the Stop Line 3 website say: “Line 3 would contribute more to climate change than Minnesota’s entire economy. Minnesota’s own Department of Commerce found our local market does not need Line 3 oil. We need to decommission the old Line 3 and justly transition to a renewable, sustainable economy. Line 3 would violate the treaty rights of Anishinaabe peoples and nations in its path — wild rice is a centerpiece of Anishinaabe culture; it grows in numerous watersheds Line 3 seeks to cross.” (stopline3.org)

According to treaties between the Anishinaabe and the U.S. in 1854 and 1855, which are federal law under the Constitution, the Anishinaabe people retain the rights to hunt, fish, gather medicines and harvest wild rice on marked territories. The pipeline crosses them without permission. The impact of construction — or worse, an oil spill — would permanently damage the Anishinaabe’s ability to exercise these rights, and an oil spill would permanently damage their historic wild rice beds.

The proposed route for Line 3 crosses 227 lakes and rivers, including the Mississippi River and rivers that feed directly into Lake Superior, also putting those waterways at risk of a spill from the 760,000 barrels of tar sands oil that would flow through Line 3 every day.

Prominent Anishinaabe and other Native activists have described the pipeline as “cultural genocide,” and Indigenous activists in northern Minnesota are leading direct actions on the ground to stop its construction.

If built, Line 3 would release as much greenhouse gas into the atmosphere as 50  new coal-fired power plants — as much greenhouse gas as produced by the entire rest of the state of Minnesota. Tar sands oil is the filthiest type of heavy crude oil to extract and process. In Alberta, Canada, its extraction has contaminated the watershed — the drinking water impacting all species. This contamination has resulted in heavy loads of arsenic in moose meat — a dietary staple for the First Nations people. (ran.org/what-are-tar-sands/)

Big banks, including Bank of America, Wells Fargo, Scotiabank, TD and Mizuho, have loaned more than $11 billion to Enbridge. Without that money, Enbridge would be unable to build the massive new tar sands pipeline. Global protests against the Enbridge Line 3 pipeline took place May 7 in eight countries on four continents, including 50 U.S. cities, against the 20 banks funding this pipeline. (tinyurl.com/yf2oj637)