May 6 — The death of 16-year-old Black lesbian Mikayla Miller under mysterious circumstances in mid-April has ignited an outcry from a broad front of anti-racism forces.

Black and LGBTQ2S+ organizers from the Greater Boston area joined with Mikayla’s grieving community to lead a vigil today that drew thousands from around the state. 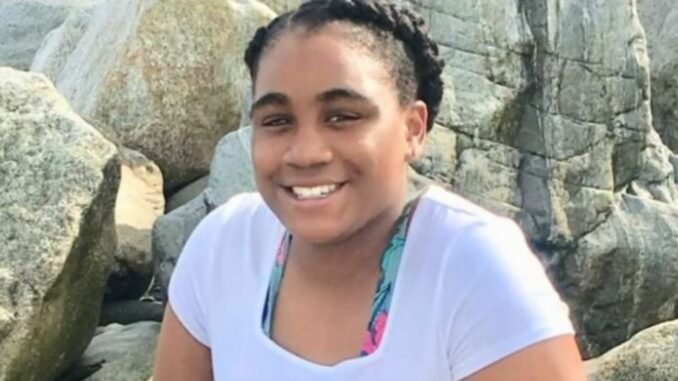 Details available about Mikayla Miller’s final hours — and the way her body was discovered — are chilling. On April 17, Mikayla’s mother called local police to report that Mikayla had been jumped in her apartment complex by several white youths whom she knew. Police came to the apartment, where Mikayla gave a statement that she had been assaulted. Less than 12 hours later, a jogger found Mikayla dead in the woods near her home, tied to a tree with a leather belt.

Mikayla’s family was notified that first-responder and police agencies were treating the death as a suicide despite glaring signs of foul play that clearly warranted a homicide investigation. This aroused concern that racism of police and other officials had impacted decisions about how the state was handling Mikayla’s death. Those decisions irreparably delayed a timely, unbiased investigation. This would have been the best chance to confirm or rule out any theory of what occurred in the hours, minutes and moments before Mikayla’s life ended forever.

When the family examined police records, they noted that official logs were missing for both the April 17 assault and the April 18 discovery of Mikayla’s body. They challenged investigators to be transparent about the status of the case. In response, police threatened the family with publicizing Makayla’s sexual orientation if they went public with their concerns.

Grief over losing Mikayla turned into outrage over these threats. Mikayla’s mother, Calvina Strothers, began posting about Mikayla’s death and the lack of investigation on social media, where the story spread quickly and resonated deeply with many, especially Black, Indigenous and queer high school youth.

As news spread, Middlesex County District Attorney Marian Ryan came under fire both for mishandling the investigation and for her office’s anti-Black, anti- LGBTQ2S+ insensitivity and lack of accountability.

Under mounting public pressure, DA Ryan finally appeared before the media and admitted her office had indeed determined that Mikayla was the victim of a crime, promising information would be released “as soon as legally feasible.”

But the DA’s mealymouthed statements only added insult to injury, because the community’s complaints that the investigation was tainted by racism were brushed off as “patently false.” The DA defended the gross negligence and misconduct of racist cops who mishandled the investigation — and repeatedly subjected Mikayla and those who advocated for her to racist, sexist, homophobic treatment and character assassinations.

All information coming out of the DA’s office has bolstered the racist status quo of the injustice system and amounts to an admission that the whole system is designed to fail Black people, who are victims of deadly white-supremacist violence — especially in an affluent suburban community. Prosecutors often demand airtight evidence before charging or arresting white suspects, as the DA’s office maneuvers to avoid a loss in its prosecution “score,” when going up against a well-funded defense.

Black community organizers advocating for Mikayla and her family have pointed out the history of racist policing. They emphasize that if roles were reversed — with a high profile white victim — Black people would already be in custody named as suspects, subjected to coercive interrogations and heavy charges, their mugshots all over the news, with a full-court press mounted to obtain a confession (plea bargain).

At today’s vigil, a wave of multinational, queer-straight solidarity surrounded Mikayla’s family, her loved ones and every young person of color who this incident has forced to ponder: “What if that was me?”

Justice can only be won in the streets, fighting against every case of police and prosecutorial racism and bigotry. In the streets, anti-racist youth — even in suburban towns like Hopkinton, Mass. — can gain experience in having each other’s back. Only in the streets can the people mount an effective campaign for nothing short of the abolition of the rotten system that allows police harm, oppression and murder to continue unchecked.

Black and Indigenous women and girls are discarded, disappeared and murdered every day in this capitalist society built on settler colonialism and patriarchy. Every day homophobia, gender binarism and transphobia is used to bully and traumatize queer youth, and many are pushed to the edge of suicide.

Every year, dozens of queer youth of color are murdered by people they know. The facts in Mikayla’s death are glaringly conclusive. There should have been zero questions that foul play was the first and most likely thing to consider, when a Black queer teenager is found dead in the manner that Mikayla Miller was.

The police and the DA’s office have proven time and again that all the diversity and “cultural competence” training in the world are incapable of reforming law enforcement into a system that will treat oppressed communities with respect and dignity.

Mikayla Miller’s case is raising an outcry not because it is unusual. Her death and the criminal lack of response by the state resonates with people, because they see again what has been wrong here in Massachusetts for centuries: the utter incapacity of the state to respect the humanity of Black and Brown and queer folks. The whole damn system needs to go!

A rally calling for the ouster of DA Marian Ryan is set for May 21.