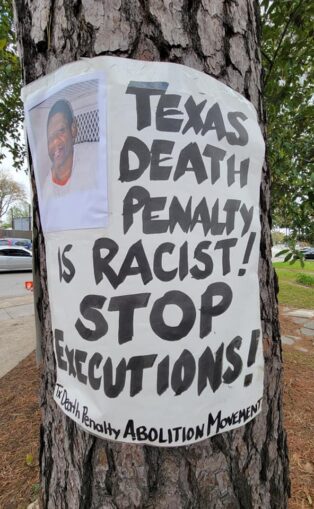 The Reed family, neighbors, supporters and activists from Houston and Austin gathered April 17 in the historic Kerr Community Center and Park in Bastrop, Texas, for their monthly event for Rodney Reed.

Reed had been set for execution in November 2019, but was granted a stay by Texas’ highest criminal court with just five days to spare. This was based on an appeal that Reed did not commit a 1996 murder and was in fact innocent.

The Bastrop gathering included making signs for Reed’s upcoming July 19 evidentiary hearing, signing Mother’s Day cards for women on Texas death row and a screening of the 2019 documentary, “A Plea for Justice,” that lays out the case for Reed’s innocence.

The film shows that it was impossible for Reed to have murdered a young white woman, Stacey Stites, in Bastrop, presenting the many inconsistencies and outright lies involved in the prosecution of Reed. After the film ended, the crowd agreed Reed had been framed and sent to death row.

“The cops lied, the Texas Rangers lied, the Bastrop police lied and the investigation was improperly done to cover up the killer, who was likely a cop. The time of death given during the original trial was wrong. Evidence was not properly stored or analyzed and, to this date, the murder weapon, a belt used to strangle the woman, has never been tested for DNA,” supporter Caleb Granger told Workers World.

On April 22, the Fifth U.S. Circuit Court of Appeals threw out a lawsuit filed by Reed’s attorneys — together with the Innocence Project of New York City — on the basis that too much time had elapsed since the original trial.

Reed’s lawyers had asked for the prosecutors to turn over the woven belt murder weapon, which has a probable residue of physical evidence because it was used with such force that it broke in two. And there was other crime scene evidence never tested for DNA. The attorneys argued that DNA testing is now routine in murder cases, and that, if the evidence was tested, it would support Reed’s claim of innocence.

At the April 17 gathering, Sandra Reed told the crowd: “We as a family appreciate everybody who came out tonight to support my son. You’ve seen this film, and there are more wrongs still. We have gotten so much support for Rodney from all over the world. We are determined to get justice and we won’t stop until Rodney is home with us.”