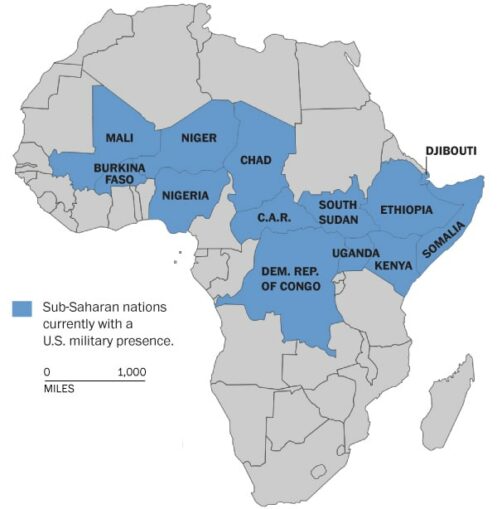 Idriss Déby, president of Chad, died April 19 in the Tibesti mountains, weapons in hand, as Chad troops fought an armed convoy of his regime’s opponents from the Front for Change and Concord in Chad, which had entered the country from Libya.

Déby’s loss was a major blow to French and U.S. imperialism, whose strategists regarded Chad — with Déby, its leader for three decades — as a “linchpin” in their efforts to control Western and Central Africa. Déby was a graduate of France’s military academy for officer training, as well as a pilot and a ranger.

Testifying to the significance of Déby’s leadership, French President Emmanuel Macron spoke at his funeral: “Idriss, you were an exemplary leader and a courageous warrior, but you also knew the value of diplomacy and cooperation between peoples.” Before Macron spoke at the funeral, he met Mahamat Déby to express France’s support for his rule, which France hopes will preserve the “stability” of Chad. (Le Monde, April 23)

U.S. imperialism carries out its military policy in Africa through AFRICOM, the U.S. Africa Command, which oversees 23 U.S. bases on the continent. AFRICOM recently changed its strategic orientation from the “degradation of VEOs (violent extremist organizations, which used to be called ‘terrorist’) to their containment.” The Inspector General — a subagency of the Department of Defense — issued the report on this change in early 2020. (voanews.com, Feb. 11, 2020)

What this retreat from “degradation” to “containment” means is that organizations resisting U.S. and French imperialist penetration and control of Africa have grown so strong that U.S. strategists judge that the Pentagon is unable to destroy them outright. They aim instead to limit the impact of the resistance and prevent growth.

One of AFRICOM’s bases is in N’Djamena, Chad’s capital. The major base for the French intervention forces in the Sahel — Operation Barkhane — is also there. The Sahel is a vast, arid area south of the Sahara Desert, stretching from the Atlantic Ocean to Sudan. It includes Mali, Niger and Burkina Faso, as well as Chad and Mauritania.

Chadian soldiers have been a significant part of the multinational forces containing Boko Haram forces in Nigeria and resisting Islamic groups in the triangle formed by Mali, Burkina Faso and Niger. They are considered to be well trained, well equipped and well led.

While Chad is one of the poorest countries in the world, ranking 185th out of 187 countries in the UN’s Human Development Index, it is a major producer of oil, pumping 130,000 barrels a day. This output puts it in the top ten African producers. Other than oil, it produces cotton, cattle, livestock and gum arabic. Yet, the level of hunger in Chad is one of the highest in the world. A quarter to a third of its people go to bed hungry every night, and stunting due to malnutrition is a major problem for its youth.

Lake Chad, once the second largest freshwater lake in the world, has lost 90% of its area and volume over the last 45 years, due to global warming and development. It is still a major resource, and hundreds of thousands of refugees from the instability and chaos in the Sahel live in its basin.

French and U.S. imperialism have spent billions of euros and dollars in order to maintain their military domination of Africa. China has instead emphasized investing in infrastructure — including education and public services — in return for being allowed access to Africa’s mineral riches. China’s policy aims to provide wheelbarrows, while the United States and France supply gun barrels.