At an emotion filled press conference April 26, MOVE members strongly denounced the University of Pennsylvania Museum and Princeton University for holding the remains of family members killed in the 1985 police bombing of their home. 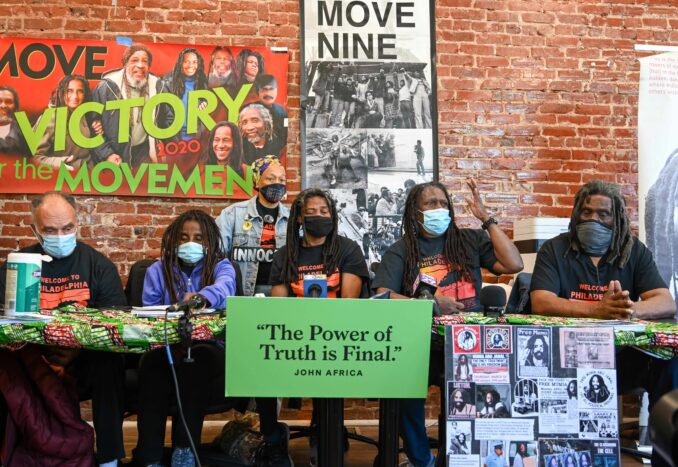 News that Penn Museum was in possession of the remains first aired in an opinion piece by Abdul-Aliy Muhammad in the Philadelphia Inquirer April 21. The bones were given to UPenn forensic anthropologist Alan Mann by the Philadelphia Medical Office for analysis. Mann subsequently transferred to Princeton University, taking the bones with him.

The bones, which are the remains of Katricia (Tree) Africa, 14, and Delisha Africa, 12, were bounced back and forth between the two Ivy League institutions over decades. UPenn issued a hasty apology to MOVE just as the press conference was starting.

Janet Africa, whose daughter died in the fire, stated: “They took their bodies, desecrated and defiled them, lied about it, and we were never told that they had the remains. They used the remains in classes called ‘Adventures of Anthropology’ like some amusement park ride. You can’t go any lower.”

Janine Africa said: “We’ve had our babies beat, pregnant women beat, men beat, and they put us in jail for 41 years. In 1985, Police Commissioner Gregore Sambor said the children were as much of a threat as the adults. Police shot at our children, forcing them back into the burning house.

“When we were finally released, the politicians apologized and said they are sorry.  We don’t trust them. They can’t give us our children. Our children are gone. We don’t want their apologies — we want our brother Mumia Abu-Jamal released.”

Tree Africa’s mother Consuela Africa was in jail during the 1985 bombing. During the press conference, she broke down in tears and had to leave for a moment. But upon returning she stated: “We just want you to see the behavior of these officials, these notable professors — they are not honorable or respectful. We are in pain, but we are not weak. We are strong people — we are revolutionaries!”