Since the start of the COVID-19 pandemic last year, the scale of inequality under capitalism has come sharply into focus.

Long before the pandemic began, inequality, racism and imperialism had threaded their way through all aspects of society, ensuring that the worst effects of disasters fall onto the most oppressed. Hurricane Katrina in 2005 and Hurricane Maria in 2017 showed that when disasters strike in places with majority Black and Latinx populations, the federal government offers little to no relief.

Early on, Black, Indigenous and Latinx communities showed much higher rates of COVID-19 cases and deaths, outpacing whiter and wealthier communities. Centuries of racism and colonialism have left oppressed communities with fewer, less well-equipped hospitals, more uninsured people and more people with underlying health conditions. Black and Brown workers make up a disproportionate share of low-wage essential workers, exposed to the virus much more than those able to work from home.

This inequality played out when former President Donald Trump, after becoming infected with the virus due to his own careless disregard for social distancing and other basic public health measures, received drugs that only a president could acquire. Pumped full of experimental drugs and cared for by the government’s top doctors, Trump’s recovery only strengthened the right’s assertion that the pandemic was not to be taken seriously.

With the mass vaccination rollout, inequality has again been laid bare. Along the lines of Trump’s “America First,” President Biden has worked to ensure that the U.S. takes priority over other countries. Earlier this year he invoked the Defense Priorities and Allocations System under the Defense Production Act. DPAS requires manufacturers of certain items to meet domestic orders first before fulfilling international orders. So although domestic manufacturers are technically allowed to sell to the international market, in effect they have been blocked from doing so. There are nearly 30 affected items, including reagents, nanofilters, tubing materials and other equipment needed for mass vaccination. (tinyurl.com/2u2n9ybf)

Biden claims to listen to scientists and even said “science is back” April 22. Yet modeling by Northeastern University found that if the first 2 billion vaccine doses were distributed evenly worldwide, based on population size, global deaths could be reduced by 61%. But if the world’s richest 47 countries hoard vaccines, deaths would fall by only 33%. (tinyurl.com/3rpekk2j)

At a press briefing April 9, World Health Organization Director-General Dr. Tedros Adhanom Ghebreyesus said that 87% of vaccines have gone to the wealthiest countries, while low-income countries received just 0.2%. Canada alone secured enough doses to vaccinate its entire population five times. At the end of March, none of the 180 million doses produced by the U.S. and Britain were exported. By April 15 they had exported under 4 million doses out of 257 million produced, while China exported 166 million doses and kept 196 million for domestic use, according to Axios.

India desperately needs critical supplies to produce and administer vaccines. On April 25, it recorded 349,691 new cases, setting a world record for daily COVID infections. It surpassed the previous record holder, the U.S., on April 22 and has recorded new records every consecutive day since. India is one of the world’s top pharmaceutical producers, yet without key imports from the U.S., it cannot produce what is needed to vaccinate its 1.3 billion people. Adar Poonawalla, CEO of the Serum Institute of India (SII), the world’s largest vaccine manufacturer, tweeted April 16: “I humbly request you [Biden] to lift the embargo of raw material exports out of the U.S., so that vaccine production can ramp up.”

Yet the SII, a privately owned conglomerate, has itself contributed to global vaccine inequality. Because it has a noncommercial license to produce the AstraZeneca vaccine, it can market its own version to poorer countries. In Uganda, SII charged $7 per dose, whereas the European Union negotiated with AstraZeneca and secured vaccines for just $2 per dose. (tinyurl.com/wm99wj7z)

India, along with the U.S., Australia and Japan, is part of the Quadrilateral Security Dialogue, or “Quad,” a diplomatic and military arrangement to counter China. Yet India’s imperialist “allies” are not offering aid and solidarity in this time of crisis, instead pursuing their own self-interest. But according to the April 24 South China Morning Post, China has offered to help India with its current outbreak, despite the two countries still facing a border dispute that turned deadly just last year.

Vaccine inequality is perhaps most stark in occupied Palestine. Israel has fully vaccinated almost 60% of its population, giving it the world’s highest vaccination rate, yet the Palestinian Health Authority reported that less than 3% of Palestinians are immunized due to vaccine shortages. Even before the pandemic, around one-third of essential medicines were unavailable in Gaza. (tinyurl.com/c6z9as5k) With a population of 2 million, there are around 1,000 new COVID cases every day; in the West Bank, over a fifth of COVID-19 tests come back positive. (tinyurl.com/27r68fmj) In the U.S., many states have had stricter lockdowns with a positivity rate of just 5%. 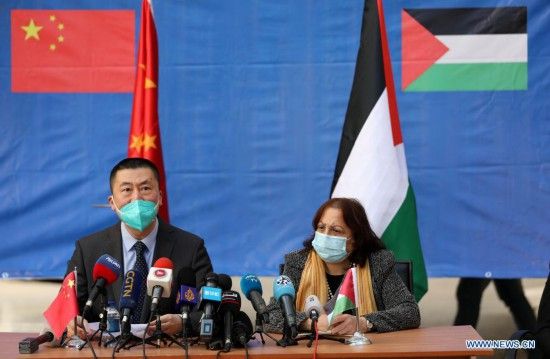 Director of the Office of the People’s Republic of China to the State of Palestine Guo Wei (left) and Palestinian Health Minister Mai al-Kaila attend a handover ceremony of Sinopharm COVID-19 vaccines in the West Bank city of Ramallah, on March 29.

Virtually the only Palestinians who have been vaccinated are those who work in Israel and come into contact with Israeli citizens. International law holds that Israel is responsible for vaccinations in the areas it occupies, yet Israel claims that a 1993 treaty absolves it of this responsibility. While some human rights organizations have spoken out against Israel’s vaccine apartheid, there has been very little international outcry, and Israel faces zero consequences. The U.S. Congress has not sanctioned Israeli officials, and diplomatic relations remain warm under the Biden administration.

In October 2020, India and South Africa jointly petitioned the World Trade Organization to waive patent protections on vaccines, which would allow anyone to produce the existing COVID-19 vaccines — not just Pfizer, Johnson and Johnson, Moderna and AstraZeneca. Despite the support of over 100 countries including China, the WTO decided not to waive patent enforcements after stiff opposition from the U.S., EU, Australia and Japan. Brazil, led by far-right President Jair Bolsonaro, also opposed waiving vaccine patents, despite having one of the world’s highest infection and fatality rates.

Pfizer used strong-arm tactics with several South American countries seeking to ink vaccine deals. In one unnamed country, which has a confidentiality agreement with Pfizer, a vaccine deal was delayed for months due to the company’s hard-line negotiations. The pharmaceutical giant demanded Brazil and other countries put up sovereign assets, such as embassy buildings and military bases, as collateral against potential lawsuits. On April 20, Pfizer finally dropped its demand for the South African government to collateralize its sovereign assets. (tinyurl.com/3r96d4s4)

In contrast to the deliberate system of vaccine apartheid of imperialist countries, China, along with Russia and Cuba, has a different approach. China, which contained the spread of the virus within its borders a year ago without the use of vaccines, is now in a prime position to produce and export billions of vaccine doses globally. By the end of this year, it will be producing its own mRNA vaccine. China has developed its own lipid nanoparticles for the vaccine, a critical component that is only made by a handful of Western companies such as Merck.

Reuters reported April 10 that China will be able to produce 3 billion doses of its Sinovac vaccine by the end of this year and 5 billion by next year. As of April 5, the foreign ministry reported China had donated its vaccines to 80 countries and sold them to another 40. Almost half the vaccines it produced have been sent abroad — China donated 1.2 million doses to Pakistan and 200,000 doses to both Zimbabwe and the Republic of Guinea.

A week after Biden denied a request to share vaccines with Mexico, China signed a deal with the country for 22 million vaccines. China donated 100,000 doses to Palestine and 500,000 to Venezuela, two countries under heavy sanctions and embargoes from imperialist powers. (tinyurl.com/vyafn8s4) “Palestine highly appreciates China’s commitment to provide coronavirus vaccines as a global public good and its selfless assistance to Palestine and other developing countries with a responsible attitude and concrete measures,” said Palestinian Health Minister Mai al-Kaila March 29.

It’s too early to see what long-term impacts on geopolitics the vaccine rollout may have, but it’s certainly plausible that countries in the developing world will reevaluate their relationships with Western corporations and governments. They may seek alternatives, and China is certainly the largest one. And China is eager to work with other countries to build modern infrastructure — from health care to transportation to energy — without the attached strings and internal interference that accompanies relationships with imperialist countries.