Sixty years ago — on April 17, 1961 — some 1,400 heavily armed right-wing exiles waded ashore at Cuba’s aptly named Bay of Pigs (Playa Girón) to initiate what they thought would be the overthrow of the revolutionary government headed by Fidel Castro. 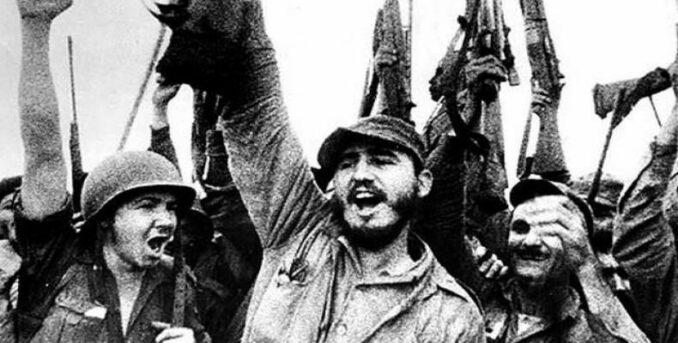 Cuban revolutionaries, led by Fidel, celebrate defeat of invasion of Bay of Pigs.

Within hours, their invasion had failed miserably. All were either killed or captured. The survivors later confessed to having been trained and equipped for the invasion by the U.S. government.

What they and their CIA handlers had failed to notice was that the remote area where they landed had once been poor and neglected, but its people had gained enormously since the Cuban Revolution.

The local militia put up a strong and successful resistance to the CIA invasion that lasted for many hours before the national revolutionary army was able to arrive, with Fidel at its head, and take most of the invaders prisoner.

Cuba later released them to U.S. authorities in exchange for $53 million in food and medical supplies — and the freedom of Francisco Molina.

Molina, a Cuban worker living in New York City, had been falsely accused of murder while Fidel was attending U.N. events. Instead of reporting on the strong international support for Fidel, blazing headlines in the tabloids labeled Molina, who had lost a hand in an industrial accident in the city, “The Hook.”

He was eventually freed in the prisoner exchange — and then welcomed back to Cuba as a hero.

Griswold served as executive secretary of the Committee to Free Francisco Molina.