Bryant Arroyo, an incarcerated worker at Pennsylvania SCI Frackville, was placed in isolated custody for several days — in other words, thrown in the hole, the “Restricted Housing Unit” — for suggesting on separate phone calls to this reporter, his daughter and another person that they keep recordings of their video conference calls with him. He then asked that what he says be shared through social media so the public can learn how bad the Department of Corrections treats incarcerated people. 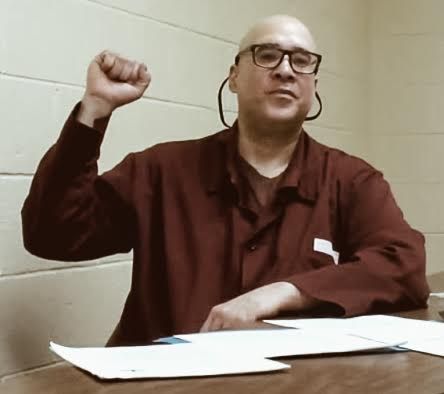 Bryant Arroyo on a Feb. 3 video call with Joe Piette

No one has actually yet shared such a video on social media. But Arroyo was punished just for raising the idea.

The PA DOC has actually been encouraging incarcerated people to use video conferencing with their loved ones since the shutdown of in-person visiting rooms in March 2020, supposedly due to COVID.

Guards and some prison officials say they would like to do away with prison visiting rooms for “cost savings” and “security.” In fact, video conferencing is another way for corporations to make a profit from mass incarceration. Many imprisoned workers are worried that virtual visits will permanently replace in-person visits with their families and friends, denying them the ability to hug and touch and see each other face to face.

The DOC uses video technology in many other ways, such as conducting court procedures without the accused actually being in court and for virtual medical visits. The DOC has installed hundreds of surveillance cameras throughout state prisons.

While it has taken to using video cameras in many daily operations, the DOC of course reacted to Arroyo’s proposal with alarm. While prison officials are fine with using video technology to enable repression, Arroyo’s proposal to share video visits on social media would shine a spotlight on deplorable prison conditions.

There is actually nothing the prison hierarchy can do technologically to prevent the public from recording and sharing video conference visits with incarcerated people. So they went after Arroyo, though he didn’t violate any rules.

In fact, the U.S. Constitution guarantees Arroyo’s right to free speech — and that of any incarcerated person.

A hearing on whether Arroyo’s spoken words on phone calls somehow violated prison regulations took place April 5. Arroyo was made to wear a bright orange jumpsuit, with hands cuffed and chained behind his back, though he never left SCI Frackville. The hearing ironically took place on video through Skype, with hearing officers who were in SCI Mahanoy.

Arroyo was found not guilty on 2 of 3 charges and returned to the general population. Arroyo wasn’t guilty of anything except exercising free speech.

Officials punished him anyway, denying him access to video conference calls for 60 days. Friends and supporters of Arroyo have since been contacted by Frackville Superintendent Kathy Brittain and told their visits with him will be restricted indefinitely.

He was returned to the RHU hole April 7 for “observation” for 15 days, because officials needed to conduct “further investigation.” Why was he required to be in solitary confinement for this investigation to happen? No one would give him a clear answer to that question.

Arroyo is a well-known advocate for environmental justice who has been outspoken against abuse by the PA DOC, especially during the COVID crisis. Mumia Abu-Jamal recognized him as a “jailhouse environmentalist” in a 2013 Prison Radio column. (tinyurl.com/yh38gmnj)

After many phone calls to SCI Frackville and PA DOC Secretary John Wetzel by friends, family and community activists, Arroyo was finally released from RHU April 15. He was then transferred to another prison 25 miles away, SCI Coal Township.

Arroyo thanks everyone who made a call on his behalf. Supporters can write to him by way of the prison mail distribution company: