An agreement negotiated by the Madawaska Maliseet First Nation and the Canadian government April 13 has become the largest compensatory land settlement in the country’s history. The Ministry of Crown-Indigenous Relations has agreed to pay $145 million to the Madawaska Maliseet First Nation after Canadian courts ruled that a specific 18th century settler land grab was illegal.

Townships of Algonquin-speaking Maliseet people were the most densely populated areas in Madawaska territory by the mid 1700s, when European land theft intensified. Settlers used the stolen resources of the land to develop logging and wood pulping industries, the growth of which was accelerated by the creation of the Canadian Pacific Railway.

In 1787, European settlers, in violation of their own legally binding treaties, stole almost 2,000 acres of land that had been reserved for the Madawaska Maliseet Nation in the northwestern corner of what is now called New Brunswick. When the railway abandoned the area in 1936, the Madawaska Maliseet began efforts to reclaim the territory. Today there are still 50,000 people who report First Nations, Métis or Inuk identity living in the region. 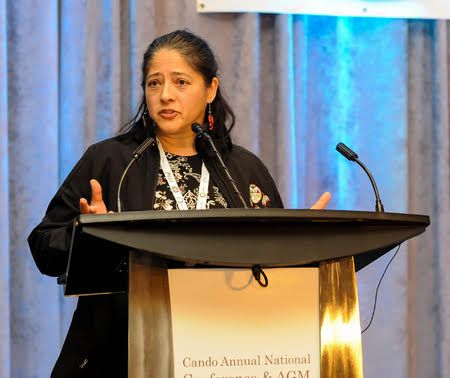 “We will be consulting with the community to determine what type of land and what uses of that is going to be for,” said Chief Patricia Bernard of the Madawaska Maliseet First Nation. Shown here Oct 25, 2018, accepting a Community of the Year award. Credit: Cando

Chief Patricia Bernard was a university student majoring in history when she learned this history and discovered that the seizure of her Nation’s land had violated a royal proclamation issued by King Geroge III in 1763. During her research, she also learned that the first person who resisted the encroachment on reserve land by bringing the case to a local magistrate was 90-year-old Louis Bernard — her great-great-grandfather’s great-great-grandfather. (Aboriginal People’s Television Network)

Since March of last year, the Federal Government of Canada has now paid $1.7 billion in land theft compensation to various First Nations in 36 separate claims, over half of the 51 total claims brought forward. Four more are currently being reviewed by the country’s high court. (Yahoo Finance)

Across Canada, First Nations and Inuk people face a staggering 40% unemployment rate. The Métis are people with a mixed heritage of Indigenous and mostly French European backgrounds and have a high but lower jobless rate of approximately 25%. (Statistics Canada)

Lack of adequate childcare for those seeking work is a major barrier to employment, and men are more likely to find work than women.

Poor housing, lack of transportation infrastructure and difficulty acquiring driver’s licenses are part of the institutional white supremacy in Canada that forces the underdevelopment of First Nations communities.

In addition to the unprecedented financial compensation, the settlement grants the Madawaska Maliseet the right to acquire 1,935 acres of land — the same amount that was stolen from them almost 250 years ago.

#LandBack, the struggle for restoration of Indigenous people’s sovereignty over occupied or stolen land, is a global anti-colonial, anti-racist movement. The liberation of oppressed nations — from Palestine to Mexico, from Nunavut to Bolivia — lies in the land.

In the words of Fannie Lou Hamer, the legendary African American sharecropper-turned-organizer and founder of the Freedom Farm Cooperative: “In order for any people or nation to survive, land is necessary.”