For four and a half months, abortion rights advocates have been defending the only abortion clinic in Pensacola, Fla. The defense effort is led by Workers World Party Central Gulf Coast branch, Strive (Socialist Trans Initiative) and Women’s March Pensacola. Every Saturday and most Fridays, working-class people have shown up to hold signs, chant and even set up fences made of tarp around American Family Planning (AFP), Pensacola’s reproductive health clinic. 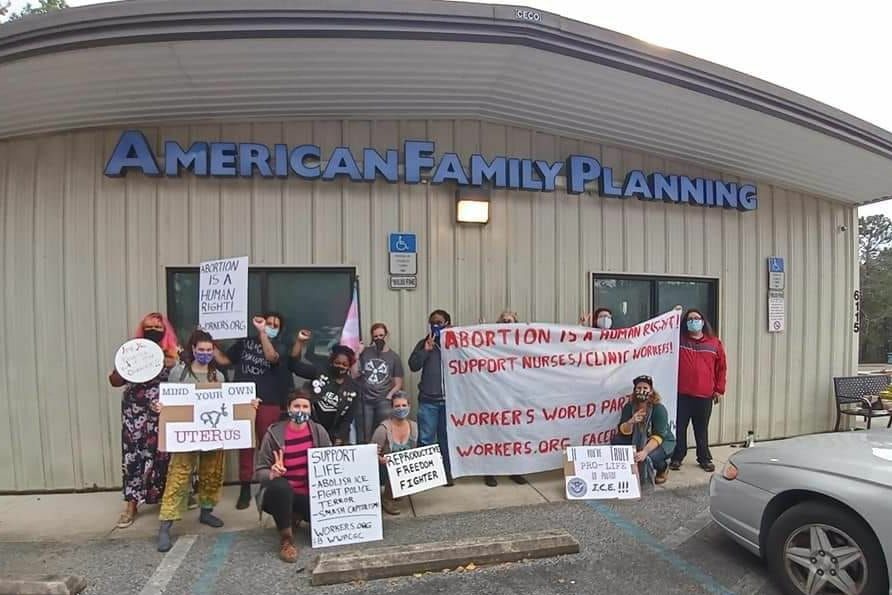 Despite this, the clinic defenders have persisted in putting pressure on business owners not to allow the anti-choice bigots on their property. AFP is almost completely surrounded by several businesses that have all previously remained “neutral” to the right-wingers’ presence. Finally, after four and a half months of pressure by clinic defenders, all but one of the businesses have signed a No Trespass Order, meaning that the anti-choice bigots are no longer permitted anywhere on their property.

Additionally, the road the clinic sits on was designated a “No Trespass Zone,” meaning that the anti-choice bigots can no longer stand or park anywhere on the road in front of the clinic. They are now banned from both the front and left side, which is where most of the entrances are and where patients are dropped off and picked up.

One business has still refused to sign the order, claiming it wants to “remain neutral.” Unfortunately, its property line abuts the clinic, allowing anti-choice bigots to walk up and down the property, screaming at people inside the clinic or, even worse, at patients who have had surgery and are waiting to be picked up. So patients who have just had a safe, legal abortion procedure still have to exit where a group of hateful reactionaries can harass and berate them.

Clinic defenders, as of this writing, are continuing to mount pressure on the business to sign the No Trespass Order and remove the bigots from its property.

The clinic backs up to some woods, which are local government property and subject to its rule. So for this last business to sign the No Trespass Order would effectively ban the bigots from being anywhere around the clinic.

There is a long, violent history of reactionary anti-choice attacks on this clinic. It was bombed twice in the 1980s. In 1993 Dr. David Gunn, the OB/GYN at the clinic, was murdered. The following year, Dr. Gunn’s replacement, Dr. John Britton, was murdered by another anti-choice reactionary, Paul Jennings Hill. The clinic was firebombed in 2012. The clinic defenders are putting their safety and wellbeing on the line, but it is what must be done. And now it is paying off.

That a disciplined group of workers and oppressed people have single-handedly mounted a campaign of pressure on local businesses to force anti-choice bigots away from an abortion clinic is extraordinary. Patients and clinic workers alike have reported to this writer and others members of the WWP-CGC branch that the presence of abortion rights advocates has made them feel better and safer at the clinic.

Abortions must remain safe and legal, and it is up to those such as the clinic defenders in Pensacola, Fla., to make sure it stays that way.

Devin Cole is a transgender Marxist organizer and writer. They are the president of Strive (Socialist Trans Initiative), a transgender advocacy organization in northwest Florida, and a member of the Workers World Party – Central Gulf Coast (Alabama, Florida and Mississippi) branch.