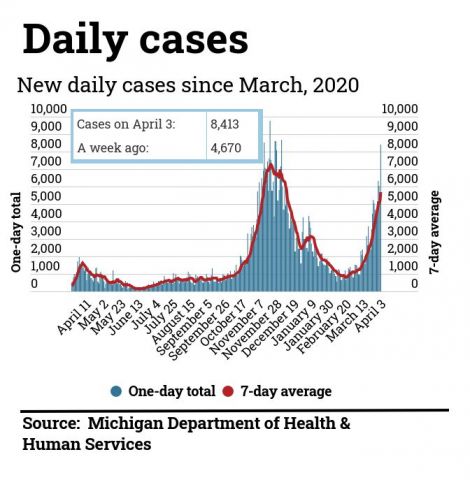 After a year of masking, social distancing and with significant sectors of the U.S. population vaccinated, COVID cases are beginning to decline. There are fewer reported deaths and hospitalizations. This is welcome news.

But there are exceptions. COVID is spiking again in Michigan with new cases averaging over 7,000 per day — seven times the state’s figure for February. Hospitals are again being pushed to capacity, and two or three dozen new deaths are reported on a daily basis.

Detroit and Flint, the state’s two poorest cities, have some of the highest numbers of new COVID infections. Both cities are majority African American, and both suffered disproportionately during earlier pandemic surges. Racism — also behind the Flint water crisis and the looting of Detroit city assets during the 2013 bankruptcy — allowed COVID to reach genocidal proportions in Michigan.

While close to a third of Michigan’s population has received at least one dose of the COVID vaccine, only one in five Detroit residents have received their first shots. These racist health care inequities that are pervasive across the U.S. — as opposed to alleged widespread distrust of the health care system — are driving these disparities. If the system was fair, workers of color would be first in line for the vaccine, as they are disproportionately consigned to the jobs of “essential workers.”

A majority of Michigan’s incarcerated workers are Black, Brown and Indigenous.

Like all incarcerated workers in the U.S., they have higher rates of COVID infection and deaths, but are the last to be vaccinated.

Another factor in Michigan’s latest COVID crisis may likely be the large number of workers dependent on the auto industry. Ford, General Motors and Stellantis (which includes Chrysler) have a majority of their U.S. plants in Michigan. There are also numerous independent parts factories in the state that supply them. The Detroit Three plants were closed, early into the pandemic, but reopened in May 2020 with inadequate preparation or precautions.

Auto plants typically have thousands of workers under one roof, who labor indoors in poorly ventilated buildings. Even with masking, physically distant workspaces and sanitation procedures, COVID is spreading among autoworkers and their families. There are new cases reported every day at Stellantis’ Warren Stamping Plant, which this writer retired from in 2019. Nonunion parts plants workers have fewer protections.

With vehicle sales climbing, the auto companies’ only concern is cranking out more products to maximize profits.

While the numbers of new cases are highest in urban centers, percentagewise the rates are rising the most in rural counties where the populations are overwhelmingly white and typically vote Republican. This is the political base of “Unlock Michigan,” the group pushing a ballot initiative to overturn the governor’s power to issue executive orders. They oppose Gov. Gretchen Whitmer’s mandatory mask requirement and previous closures of bars, restaurants and other businesses.

Under the influence of right-wing propaganda, many in these rural areas openly defy masking requirements and make a point of attending superspreader events, including the many pro-Trump rallies last year. They have made serious death threats against Whitmer, and some militia members face jail time in a plot to kidnap her. Michigan fascists are among those appearing in the now-infamous photos of the Jan. 6 Capitol siege.

Predictably, this dangerous political element is now spreading the pandemic in communities which often lack a nearby hospital.

A third aspect of the crisis is the increase of infections among adults aged 20-40 years old and K-12 students as schools reopen.

Michigan’s dire COVID situation led Whitmer to ask President Joe Biden to increase the state’s vaccine allotment. So far Biden has denied her request, holding to plans that base allocations solely on the number of adults in each state without regard to income or ethnicity. This position will lead to more deaths.

If Michigan is to halt the spike in COVID numbers and flatten the curve like the rest of the country, Whitmer must issue new, enforceable emergency orders immediately. Her latest “voluntary” appeals to continue masking and distancing and avoid indoor gatherings are inadequate. Facing reelection in 2022, Whitmer unfortunately appears to be putting her career above public safety.

While ex-President Donald Trump deserves much of the blame for the hundreds of thousands of COVID deaths during his administration, the disaster in Michigan reminds us not to let Democratic politicians off the hook. Recent events in the state — whose workers have generated so much wealth for the capitalist class — are another argument for a socialist system that puts human needs before profit.