The following edited remarks were made at an April 9 webinar, “The Struggle Continues: Next Steps for BAmazon Union and Beyond — Organizers’ Meeting.” The Support Amazon Workers solidarity campaign (supportamazonworkers.org) organized the session. Saladin Muhammad is a founding member of the Southern Workers Assembly (southernworker.org) and Black Workers For Justice, based in North Carolina. 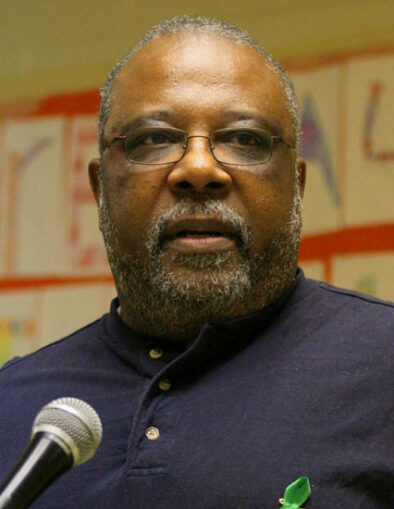 There’s disappointment at the vote against a union at Amazon in Alabama. But recognizing the absence of a real strong labor movement and a strategy for organizing labor in the shop, we go into the campaign for “next steps” with a different kind of view than simply based on winning a particular election.

For any outcome of the Bessemer Amazon workers campaign, we go on with a view of how a workers’ struggle begins to open up and create a new climate — and possible new alignments and new forms of organization — that could make organizing in the South, and organizing nationally, much more powerful.

The Amazon corporation, as we know, is one of the biggest corporations in the world, with great amounts of money — a global corporation. And it has new technology that it’s using to organize, monitor and intensify the production levels of the workers. For those of us who consider ourselves on the left, and for trade unionists as well, it’s important to see this battle as an opening battle.

The battle in the form of solidarity actions has even brought together progressive forces of different political and ideological tendencies that might not ever have come together had there not been this kind of struggle. That’s a positive development.

The battle created a political climate coming out of the Black Lives Matter period where workers surfaced and probably felt — in spite of the weaknesses from labor’s absence in the South — that this climate was the time to rise up and take the risk of challenging a big corporation. We have to look at some of the positives.

For those of us who recognize that the struggle against capital is not some instant action, it’s not simply a protest. It’s a strategy that’s deeply rooted in the working class and the oppressed sectors — especially those who have a level of consciousness about exercising power and can identify the weaknesses in our employers and who know them as the backbone of a system that’s reinforced by the state.

So I raised these things to say: Let’s not be too disappointed! We have an obligation not to let this expression of consciousness and the courage to go up against the big corporation — we must not let it disappear. 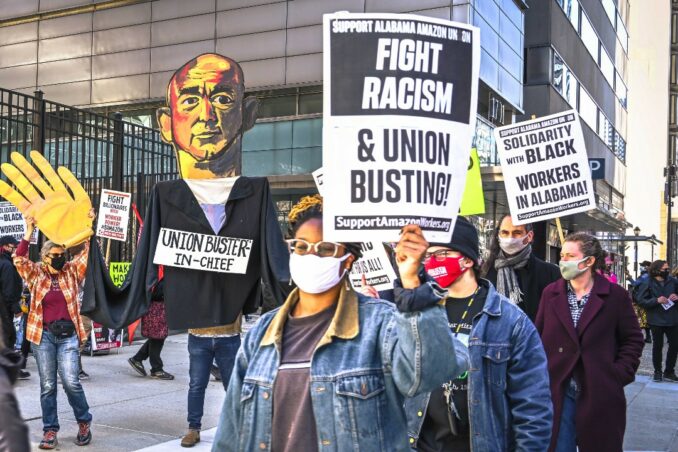 And that’s one of the roles for the left or for progressive forces of the labor left and the trade unions — to make this a new period of working-class challenge, of the working-class movement. That’s a positive. I think it’s important.

Biden was forced by the climate to make that statement implying support for unions — like Roosevelt was forced by a climate of workers’ struggle. Had the BAmazon Union been a campaign that didn’t have national and international support, Biden wouldn’t have taken that position. So we have to look at some of these elements, these factors in our summations of this campaign.

Yes, there were weaknesses. And one of the weaknesses is that there is a weak rank-and-file movement in the local trade unions all around the country, in the U.S. unions — there was no pushing the unions, pushing the union leadership to mobilize in support of the Bessemer Amazon workers. Most of the solidarity actions took place outside of the unions. Some local unions mobilized, but there was a lack of a rank-and-file labor left throughout the trade union movement to complement the courage and the initiative taken by the Amazon workers. 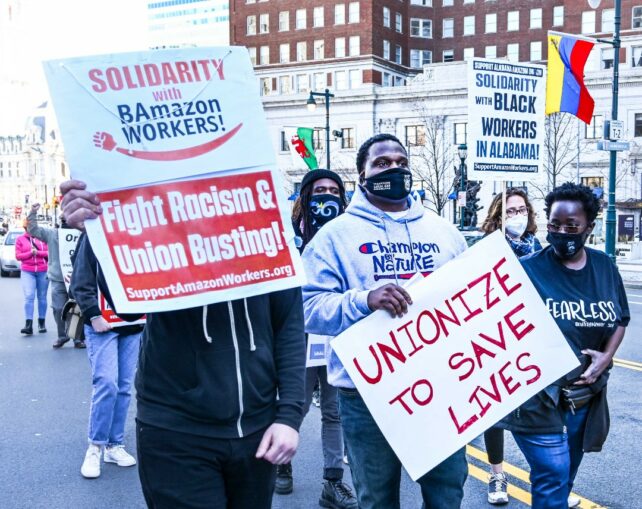 And if there’s no feeling that that’s the case, then we are in trouble, comrades, in terms of the struggle against systemic racism, or national oppression as I characterize it, or colonialism as others characterize it. If not, we are in real trouble.

We saw that this was a need as we moved to build for the February 20 actions to support the Amazon workers. And we saw this as a need as a follow up to the outcome of the vote, whichever way it went.

On April 18, we’re going to be organizing a four-part series of a workers’ school that speaks to the new industry that workers will be confronting in the 21st century, like Amazon. [The school] will be about how to prepare ourselves for a struggle that’s going to involve more and more big government protected in and by technologically advanced industries.

But we have to go deeper into the working class and the oppressed. And we can’t just rely on the unions to be the vehicle to go deep; we’ve got to go deep so that’s the preparation for union campaigns and more.

Finally, there has to be a framework for the left to unite in order to build a mass workers’ movement — a radically oriented, politically independent, mass workers movement. This is the perspective that the Southern Workers Assembly has. And for some of us who got a couple of years under our belt, we’re trying to make sure that’s completed based on the amount of time we think we got left on this earth.

We’ve got to have a strategy, and it’s got to go beyond subjective feelings and needs. I think we can do it, and I think we have to be inspired by the initiative of the Bessemer Amazon workers, and we need to encourage them. We need to have speaking tours, bring them all around the country. Our unions and all our workers’ organizations, we need to have celebrations — celebrating their courage and their initiative and celebrating this period that they have just opened up. We can do that. Thank you, comrades.