On April 11, police in Brooklyn Center, Minnesota, on the northwest border of Minneapolis, fatally shot a young Black man named Daunte Wright. According to witnesses, Daunte Wright was being stopped by Brooklyn Center police when he was shot by an officer. He then got back in his car and drove away, driving a few blocks before crashing the vehicle several blocks away. 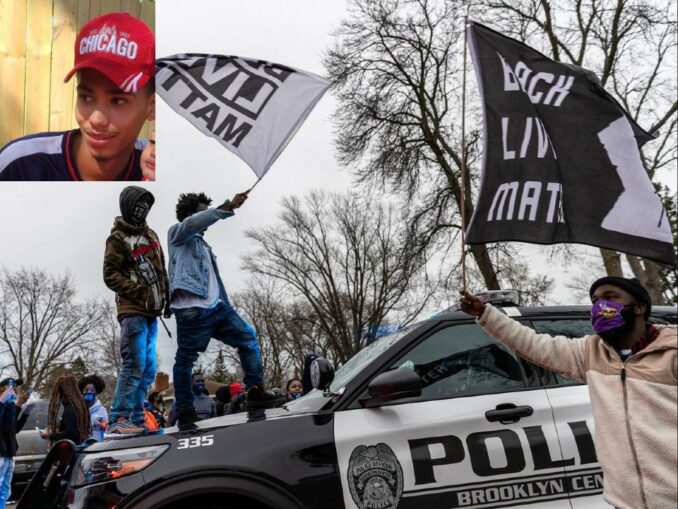 According to the Washington Post, the police told his father, Aubrey Wright, that they stopped his son initially due to an air freshener allegedly blocking his rearview mirror. The father questioned the police motive since his son’s car windows were tinted. The police then claimed that they asked Wright to step out of his car for an “outstanding warrant” before he was killed. (April 12)

Police officials are now saying that the killing of Daunte Wright was an “accident” since the officer who shot him thought it was a taser.

This recent killing of the 20-year-old father of one child comes at a time where just 10 miles away, a white cop, Derek Chauvin, is in the middle of a trial to determine if he will be legally punished or not for murdering 46-year-old George Floyd, a Black man, in late May 2020, by kneeling on his neck for 9 minutes and 29 seconds.

During the day following the murder, Daunte Wright’s mother, Katie Wright, asked people to come to the location where he was shot to demand answers as to what happened, but the crowd was quickly dispersed by the police.

Later in the evening of April 11, hundreds of protesters marched on the Brooklyn Center police station. The police shot tear gas, marker impact rounds and rubber bullets at protesters, including media reporting from the street. One medic was reportedly hit with a rubber bullet.

These protests led by anti-police terror organizers and activists lasted well into the morning of April 12, with sources such as Unicorn Riot reporting as late as 12:45 a.m. that local police, backed by the National Guard and the Minnesota State Patrol, were threatening to arrest all protesters, as well as the media. (tinyurl.com/yjg27uv3)

This fascistic response to the uproar against terror against the Black Lives Matter movement proves further that police everywhere, the long arm of the capitalist-imperialist state — though decaying — are still terrorizing communities of the colonized and oppressed. And the struggle against them and the entire repressive state is intensifying further and further.