Ramsey Clark was a founder of the International Action Center and inspired the political activists who used its structure to defend liberation struggles, oppose U.S. wars of aggression, defend political prisoners whether in U.S. prison-industrial complex or in the U.S.-backed dictatorships worldwide. IAC militants joined international delegations that defied the blockade of Cuba and sanctions on Iraq, contested the U.S.-NATO war on Yugoslavia or joined the wave of resistance then sweeping Latin America.

He guided the production of hundreds of books and videos, mass meetings, internet campaigns and demonstrations the IAC organized. 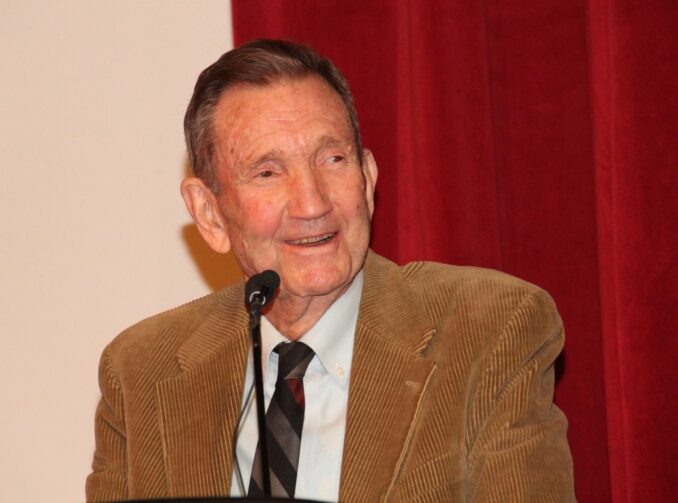 The IAC is collecting tributes and statements about Ramsey Clark’s contribution.

We salute Ramsey Clark, who died April 9, 2021, an outspoken defender of all forms of popular resistance to oppression, a leader always willing to challenge the crimes of U.S. militarism and global arrogance. He remained optimistic that the power of people could determine history. His courageous voice will be missed.

Ramsey Clark will be remembered by people and struggles around the world as a prominent  individual who used his name, reputation and legal skills to defend people’s movements and leaders who the corporate media had thoroughly demonized.

Clark’s early belief in the U.S. role turned, through harsh experience and observation of what he considered U.S. war crimes, to a determination to challenge U.S. policy and defend the victims of U.S. aggressions regardless of personal cost. His actions, leadership and writings showed his political development over the past 60 years, above all, his actions.

Born into a prominent Texas family in 1927, his father Supreme Court Justice Tom Clark, Ramsey was raised to believe in the power of U.S. laws. He came of age at the apex of U.S. power at the end of World War II and experienced the U.S. empire’s long decline and decay. He was appointed assistant attorney general in 1961 during the John F. Kennedy administration and attorney general during the Lyndon Johnson administration in 1967.

The 1960s power of the Civil Rights Movement and Black liberation struggle demanded sweeping change in government. As attorney general Clark enforced desegregation of schools across the South and  supervised the drafting of the Voting Rights Act of 1965 and Civil Rights Act of 1968. He drafted housing legislation and enforcement of Indigenous Nations Treaty rights.

Unlike nearly every other Cabinet level official, who leveraged their post into a multi-million dollar career after leaving government, Ramsey Clark leveraged his role as former attorney general to act for the impoverished and voiceless.

In 1972 he traveled to North Vietnam during President Richard Nixon’s bombing campaign. He was in Tehran, Iran in 1979 on days when millions of Iranians braved machine guns of the Savak Police and overturned the brutal U.S. backed shah and his whole regime. He visited Cuba numerous times to challenge the U.S. blockade and express deep admiration for the dramatic changes the Cuban Revolution made possible.

Along with demonstrations of tens of thousands against U.S. wars in 1991 and 2003, Ramsey Clark headed significant mass meetings in Solidarity with Cuba at Javits Convention Center in 1992 and with Bolivarian Venezuela at Town Hall in 2005,

Clark stood by the 1979 Sandinista revolution in Nicaragua and the struggle for liberation of El Salvador in the 1980s against a U.S. backed dictatorship. He traveled to Panama after the December 1989 U.S. invasion to document the enormous toll in life.

While many embraced the collapse of the Soviet Union as ending the Cold War and ushering in an era of peace and prosperity, Clark held the view that this would lead to endless wars of U.S. expansion and an effort to recolonize many countries.

At great personal risk Ramsey Clark traveled to Iraq during the height of the 1991 U.S. bombing. Extending personal courage to political and legal skill, he wrote a 19-point indictment of the Bush administration for War Crimes and Crimes Against Humanity that resonated around the world.

The indictment became the basis of a Commission of Inquiry that held mass popular hearings in 19 countries and 26 U.S. Cities. Ramsey attended every mass hearing. The final tribunal was held in New York City in February 1992 before thousands of people and international delegates. The events drew strong media coverage around the world, and total censorship in the corporate U.S. media.

During the years of the deadliest sanctions on Iraq that caused the death of a half-million Iraqi children within four years, Ramsey brought international delegations each year to challenge and expose the impact of the sanctions.

These fact-finding and human rights delegations almost always included videographers, journalists and photographers to document the impact on defenseless civilian populations. He encouraged others to also organize solidarity delepations.

Following the 2003 U.S.-British invasion and occupation of Iraq and under even more dangerous conditions, Clark traveled to Iraq numerous times. He provided legal defense for Saddam Hussein, Iraq’s captured president, who the U.S. and its Iraqi lackeys put on a show trial.

Though the outcome was inevitable, Clark was determined to expose that the real crime was the U.S. destruction of Iraq and was unapologetic for his defense of Saddam Hussein. Three of his Iraqi defense lawyers were assassinated for their role defending him. Saddam Hussein was executed on Dec. 30, 2006.

In 1998 the U.S. bombed a small pharmaceutical plant producing the only anti-malaria drugs in Sudan claiming it was a secret VX Nerve gas facility. Ramsey immediately organized doctors, pharmacists and videographers to expose this crime against the civilian population.

In the biggest and most dangerous aggression in European borders since 1945, the U.S., determined to expand the NATO military alliance into the Balkans and Eastern Europe, launched the 1999 war to dismember and destroy Yugoslavia, during the Bill Clinton administration. Ramsey Clark was in Yugoslavia twice during the 78 days of relentless U.S. bombing, expressing solidarity with people under attack documenting that the Pentagon consciously targeted civilians.

Clark gave priority to visiting bombed schools, hospitals, market places, water purification plants, grain silos and pharmaceutical plants, as he did in other countries the U.S. bombed. Following the war, he drew up a public indictment of Clinton and other leaders of NATO countries and inspired a mass People’s Tribunal on U.S. war crimes in Yugoslavia, whose final hearing was in June 2000.

Clark dared to meet with Yugoslav President Slobodan Milosevic in Yugoslavia during the U.S. bombing and later at the Hague after the kidnapped president faced an international kangaroo court the U.S. established to try Yugoslav leaders. Ramsey’s view was that the wrong leaders were being charged. According to his indictment for the 2000 tribunal, Clinton should have been in the dock, along with Secretary of State Madeleine Albright and the corresponding leaders of Germany, Britain, France and other NATO powers.

While much of Ramsey Clark’s work focused on defense of nations under attack by the U.S., he also defended dozens if not hundreds of political prisoners of the empire, in and outside the United States. These included Indigenous activist Leonard Peltier; Imam Jamil Al-Amin (aka H. Rap Brown), who is held in a Super Max prison. He and Lynne Stewart were willing to defend Egyptian Sheik Omar Abdel Rahman. (For her role, Stewart was charged and imprisoned).

He supported independence for Puerto Rico and freedom for its many political prisoners. He traveled to Peru to defend U.S. citizen Lori Berenson, held by Peru’s dictatorship and to the Philippines. He defended Jose Maria Sison against “terrorism” charges. Clark publicly supported Dr. Aafia Siddiqui, a Pakistani woman tortured in Afghanistan and serving 86-year sentence in U.S. Federal prison as well as Mumia Abu-Jamal Pennsylvania State Prison.

He traveled to Nepal when a revolutionary upheaval brought in a new government and to DPRK North Korea to protest against U.S. war games and nuclear threats.

When Palestinian leader Yasser Arafat was targeted by U.S. and Israeli forces, Clark met with him in Lebanon, and later traveled to Gaza under total Israeli shutdown and met with Hamas leadership.

Clark denounced every aspect of the “U.S. War on Terror” as a War Against Islam with endless military operations, sanctions, drone strikes, regime change operations, assassinations, secret detentions and a series of bases throughout Africa to Central Asia and the Gulf States.

In 2011, NATO imperialists took advantage of an opening provided by the Arab Spring and the mass upsurge that overthrew the dictatorships in Tunisia and Egypt, to open a 220-day bombing of Libya and murder Libyan leader Muammar Gaddafi. This destroyed the country with the highest standard of living in Africa.

U.S. imperialism then turned its full efforts into pulling down the government of Syria. Ramsey traveled to Syria several times in an effort to again focus attention on the impact of U.S. subversion on civilians. Traveling at personal risk, Clark exposed what U.S. sanctions, the arming of tens of thousands of mercenaries and then bombing vital infrastructure was doing to whole countries.

Even as decades rolled by Ramsey maintained an intense schedule of listening to and involving activists in challenging projects, along with speaking, traveling and consulting with peoples under attack.

Sara Flounders is Co-director of  The International Action Center