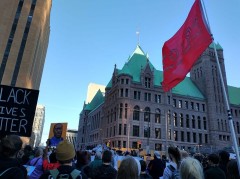 This is a shortened version of an article originally published in Fight Back! News about ongoing protests against the May 23, 2020, police murder of George Floyd, which sparked massive U.S. demonstrations against racism. The full article can be read at tinyurl.com/uzzkd74w.

March 31 — Hundreds of people protested Monday, March 29, to demand justice for George Floyd and the conviction of Derek Chauvin. The demonstration took place after opening statements and the first witnesses testified in court. Many were still reeling from an emotional day in court, where videos of Floyd’s murder were replayed several times, and the proceedings were broadcast live.

In opening arguments, special prosecutor Jerry Blackwell told jurors that George Floyd said he could not breathe 27 times while Chauvin kneeled on his neck and back. He played one of the bystander videos taken the day that Floyd was killed, which some jurors had not seen before. He said that Chauvin’s decision was not a split-second one, but instead deliberate, as Chauvin ignored pleas by Floyd and the nearby crowd for nine minutes 29 seconds (popularly reported as eight minutes 46 seconds, based on a viral video of the murder).

Blackwell said Chauvin’s actions were an exception, in a violation of Minneapolis Police Department use of force policies, and that several officers, including the chief of police, would testify for the prosecution.

To suggest that Chauvin’s brutality is not typical of MPD behavior overlooks that MPD kills unarmed civilians every year, as do police forces across the country. What is unusual is that Floyd’s torture and murder were captured on video and broadcast live on social media, as it was happening.

Three prosecution witnesses testified March 29. Jena Scurry is a 911 dispatcher who had watched Floyd’s murder unfold on police surveillance cameras in the area. Scurry testified that, despite never having done so in her several years working dispatch, she called to report the situation with George Floyd to the MPD sergeant supervising Chauvin and his accomplices. . . . The second witness was Alisha Oyler, a worker who was on duty at the Speedway gas station across the street when Floyd was killed. When asked why she took several videos of the murder, Oyler said it was because police “are always messing with people, and it’s wrong.” . . . The third prosecution witness was Donald Williams, a mixed martial arts fighter who said he witnessed Chauvin torturing Floyd with what he called a “blood choke.”

Emcees Sam Martinez, DJ Hooker and Angel Smith El energized the crowd with chants and invited them to get involved with ongoing organizing efforts, including the fight for community control of police. They work with Twin Cities Coalition for Justice 4 Jamar (TCC4J).

Michelle Gross, of Communities United Against Police Brutality, began by speaking about the razor wire and barricades around the courthouse: “That’s because the city and state are more afraid of the community than they are of violent police. What does that say about our city and our state?”

But Gross and others are not intimidated. “We are going to watch this trial very closely. In the meantime we are going to be out here demanding the changes we seek. . . . Rein in those brutal-ass cops, who are still brutal to this day. We won’t quit until these cops are reined in.”

Toshira Garraway, founder of Families Supporting Families Against Police Violence, organizes not only for other families but also for her son’s father, Justin Teigen, who was brutally beaten to death and thrown in a trash dumpster by Saint Paul police. She says that because state officials have allowed so many police murders to go ignored, they are responsible for George Floyd’s death. . . .

Kaia Hirt and Chaz Neal spoke about the Locks for Loved Ones Lost project, an ongoing effort of community members to attach padlocks to the police-state fencing around the Government Center. The organizers say the locks are to “remember the people they killed and the families they shattered. They keep cutting them down, and we keep putting them back. We’ll never stop.” As a song played, hundreds more locks were placed on the fence.

Then the group marched from the courthouse to the temporary headquarters of the Minneapolis police 3rd Precinct. The old 3rd Precinct building was destroyed by protesters just a few nights after George Floyd was killed.

[After other demonstrators spoke,] the march returned to the courthouse [where] Kaia Hirt chained herself to the fencing and vowed to stay until state and city political leaders meet with families of those murdered by police. As of Tuesday afternoon, March 30, Hirt was still chained to the fence, surrounded by supporters.