“The workers in Bessemer never thought they’d spark a national discussion. This is their moment, but it’s not just about Amazon. This is about every employer and the right of every worker to fair pay, safe workplaces, a voice in their workplace and the right to organize unions without illegal harassment and intimidation. It is about the inseparability of racial and economic justice. By taking the fight to the world’s most powerful company in a way that previously seemed unthinkable, Amazon workers are proving that change is within the grasp of any worker, anywhere. Employees in workplaces large and small can look at the progress being made in Alabama and realize that they too can stand together with their fellow workers and demand justice. With their historic campaign, Amazon workers have already won. It’s up to all of us to build upon their victory.” 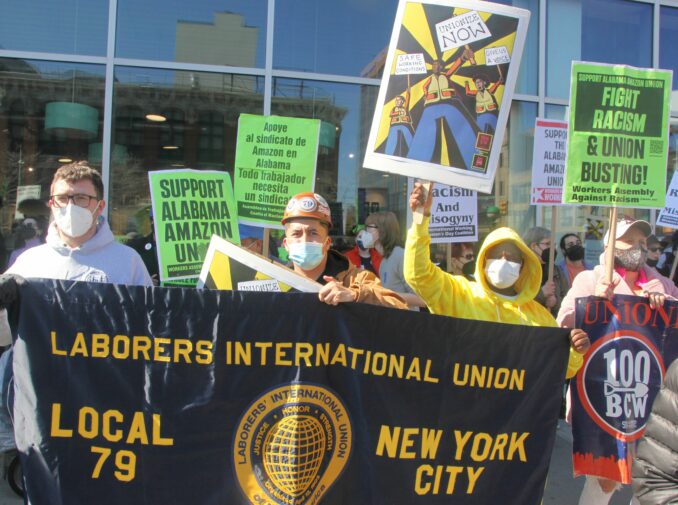 It is unusual to begin an article about an epic rank-and-file worker struggle by quoting union leaders. Yet this is not a typical story. The majority Black workers in Bessemer — in their fight against the ultimate symbol of monopoly capitalism, Amazon — represent the iconic battle of working-class underdog vs. capitalist bully.

The Retail, Wholesale and Department Store Union, a relatively small organization with around 60,000 members, has ignited a spark of union organizing that has encouraged mass solidarity with their struggle.

The all-powerful Amazon has exposed its weakness — the problem of all capitalists — that it depends upon the exploitation of workers. This is particularly true in the logistics and distribution sectors, which can be important choke holds for the working class to control the flow of commodities.

The courage of the RWDSU and its members has exposed this weakness and raised major questions about the future of working-class organizing.

We are at a crossroads in the history of the working class. The Alabama Amazon struggle provides us the choice to go in a new direction. Following this struggle can change everything we know about the working-class movement and the left.

The BAmazon Union has brought the question of workers fighting for unions into mass consciousness like no other struggle in decades. Thousands of Amazon workers across the world have likely heard this news and begun talking with their co-workers about why they need a union. The popularity of unions with workers everywhere continues to increase, as the public outcry against the billionaire ruling class grows.

Mass solidarity critical for inside organizing

Workers World Party, along with our allies in the workers movement and others in other left parties, initiated a campaign called Support Alabama Amazon Union (SupportAmazonWorkers.org), to build mass solidarity with the Bessemer workers.

WWP turned to the many sectors of the political movement, to the Black Lives Matter activists, to those struggling against gender oppression and against the U.S. empire, and said, “Let’s organize mass support for Alabama Amazon workers.”

The party felt it was critical that the revolutionary left, which has a strong analysis of oppression and exploitation, be at the forefront of supporting Black workers in the U.S. South organizing unions.

No doubt some serious union organizers might ask: “Why turn to the movement? We should be organizing Amazon workers instead!” To them we would reply, we need to do both! We need a strategy which combines rank-and-file organizing with one of mass, working-class solidarity.

To our surprise, many local union leaders enthusiastically supported this effort in cities all across the U.S. and even in Canada and Europe. The leadership of the World Federation of Trade Unions supported the call for March 20th international actions in solidarity with Amazon workers. 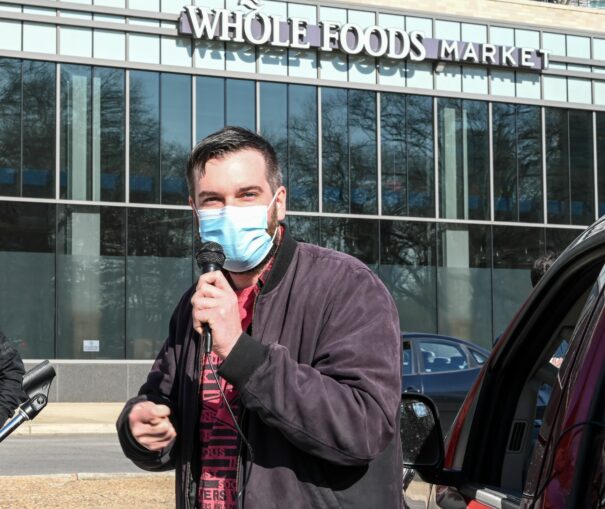 Why did this work so well? How did left forces have such an impact? Not only is supporting these Amazon workers a critical struggle for rebuilding working-class organizations, we believe that the appeal of a united front of the left to organize the unorganized and build solidarity, one which emphasizes the needs of our entire class over the needs of one organization or tendency, is the most important project we could initiate.

To defeat the multitentacled monopoly that is Amazon, the working-class movement will need to undergo a massive transformation. No longer can each union organize purely within its own trade or sector of our class. We need major unions like the Teamsters and the American Postal Workers Union, along with smaller progressive unions like the RWDSU and United Electrical Workers (UE), to come together to launch joint workplace organizing campaigns.

Initiatives like the Emergency Workers Organizing Committee, a project of the Democratic Socialists of America and UE to support workers organizing, should be expanded. Bringing the left, including thousands of radical people who are not part of any organization, into union organizing programs will be critical. In fact, it is how the unions were organized in the first place. Young revolutionary workers in particular should see union organizing as a duty, a part of their work toward building a new society.

Yet we must not forget about mass solidarity with workers’ struggles. Not everyone can or will organize their workplace. Mass solidarity, along with supporting workers organizing on the job, can be coordinated through the development of local, statewide and regional workers assemblies.

Workers assemblies connect workers and community members into a body designed to build solidarity, to amplify the struggle and to organize the unorganized. Workers Assemblies educate workers across different industries on the issues impacting their class, agitate workers to take militant action and organize workers to dig deeper into our class to win union campaigns.

The Southern Workers Assembly is an example of this type of project, connecting various local unions across the traditional borders of their national organizations with community organizations to build an inside-and-outside approach to organizing the South, with particular focus naturally on Black and women workers. This effort should be studied seriously and serve as a model for our future work.

Workers assemblies can be a critical tool for the reorganization of our class, unifying people from various backgrounds, unions, community organizations and political ideologies through a process of collective struggle. These bodies can build campaigns for the PRO Act, an important bill needed to increase workers’ rights to organize unions, the same rights that are continuously violated by companies like Amazon.

They can serve as supporters for various local workers’ struggles, whether it’s more Amazon workers fighting for a union, communities fighting to end police brutality, or migrant workers and other workers of color, including Black, Latinx, Asian and Indigenous communities, defending themselves from racist attacks. This type of solidarity is what we need to chart a new path toward rebuilding the union movement and reorganizing the left into an entirely new force in society.