Megan Rapinoe’s captivating autobiography, “One Life,” traces how her upbringing and lifelong joy of playing soccer led to stardom and political activism.

Rapinoe has used her superstar status to advance the fight of workers and the oppressed. In 2012 she joined the handful of professional athletes who are out lesbians. In 2016 she took a knee during the national anthem protesting police brutality and systemic racism. Now Rapinoe is fighting for equal pay for women.

Rapinoe is co-captain of the U.S. Women’s National Soccer Team (USWNT) and has been essential to their winning record: four Women’s World Cup titles, four Olympic gold medals and eight Concacaf (Confederation of North, Central America and Caribbean Association Football) Gold Cups. In 2018 she became the fourth woman to be named Sports Illustrated’s Sportsperson of the Year. In 2019 she won the Golden Cup for best player and the Golden Boot award for best scorer at the Fédération Internationale de Football Association tournament.

Rapinoe began reading about gay rights and the law in 2011. During that time her skill on the soccer field was making her a public figure. She started asking herself, why she was not out? And none of her gay teammates out? She told her lesbian soccer friend Ali Krieger, “There are young kids who are too scared to be themselves, and if we keep hiding, it doesn’t make it normal to be in a lesbian relationship.”

In 2012 Rapinoe came out publicly in an interview with Elle magazine, “I feel like sports in general are still homophobic, in the sense that not a lot of people are out,” she said, “People want — they need — to see that there are people like me playing soccer for the good ol’ U.S. of A.” (tinyurl.com/zvtabe7d)

On taking a knee 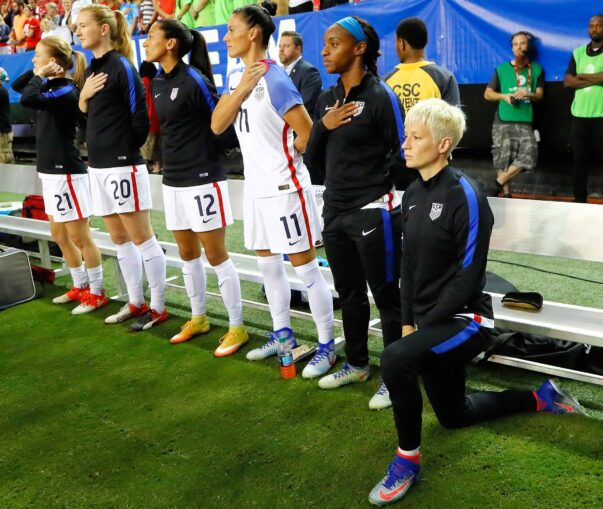 With the LGBTQ2S+ movement a jumping off point for her politicization, she said that in 2015, “In the wake of Ferguson, I read every piece on racial injustice that came out in the press.”

After reading how white supremacists razed the Black towns of Tulsa and Rosewood, she realized that, “For Black Americans there have never been gains without backlash.” She said it became clear to her that white supremacy was the system from which all other inequalities flowed. She realized “fighting racism was also my fight,” and that “we’re not free until we’re all free.”

Inspired by Colin Kaepernick, Rapinoe took a knee during the national anthem in 2016 in Chicago and again a few days later in Maryland. She recalled “the furor was instantaneous and huge. Whew, were white people mad.”

She was booed and jeered by fans. Trump and conservative commentators chastised her for disrespecting the military. Her family in Redding, Calif., a conservative town, received hate mail; local bars tore down her pictures. “I realized,” she said, “there is a particular kind of baffled outrage reserved by white people for other white people they consider to be ‘betraying’ their race, and that week I felt the full force of it. People called for me to be fired from the team. My social media feed filled up with abuse.”

Rapinoe explained, “When I campaigned for LGBTQ rights or pay equity, I had always been warmly received. I knew racism was different.”

Rapinoe didn’t lose her big sponsorships like Nike, but she didn’t get any new sponsorships or opportunities. While recuperating from an injury, the soccer league used her injury as an excuse to not play her. She kept her contract, but she wasn’t allowed to play until a ruling was passed that made players stand for the national anthem during games.

Rapinoe said she doesn’t regret kneeling but realizes that for Kaepernick, kneeling during the national anthem meant the end of his career. For her, it eventually became a rebirth. She regrets that she stopped kneeling: “That’s something that I feel like I still struggle with. I didn’t want to lose my job.”

Rapinoe wanted to keep playing for the national team, which gave her a platform from which to speak: “That was a really tough decision. I mean, I think in one sense, I probably made the right decision, because I sort of battled back and got to a level where I was then undeniable. And then they had a really big problem on their hands, because I really wasn’t going anywhere.”

Despite the fact that the men’s national soccer team has never won a World Cup title, and the USWNT has won four, men players make over four times what women players make in salary. A woman’s minimum in 2019 was $16,538 compared to men’s $70,250. (tinyurl.com/4n679tss)

Working with members of the USWNT, Rapinoe has been a leader in fighting for equal pay. In March 2019 USWNT filed a lawsuit against the U.S. Soccer Federation for pay discrimination. In May 2020 a federal judge dismissed the claim, but the team plans to appeal.

On March 24, National Equal Pay Day, President Joe Biden invited Rapinoe to testify for the need to close gender-based pay gaps. Rapinoe told the press, “I know there are millions of people who are marginalized by gender in the world and experience the same thing in their jobs.” And in her prepared statement, she wrote: “The women’s national team has won four World Cup championships and four Olympic gold medals on behalf of our country. Yet despite all this, we are still paid less than men — for each trophy, each win, each tie, each time we play.” If that can happen to women “with the brightest lights shining on us,” she added, it can happen to women in any industry. (tinyurl.com/33fz3pmu)