These slightly edited comments were given during the March 18 Workers World Party webinar, “Mumia Abu-Jamal: The Only Treatment is His Freedom!”

A quarter of a century ago, in the summer of 1995, Mumia was facing an execution date. That date was Aug. 17, [the birthday of Black Nationalist leader, Marcus Garvey]. We had one mission — for the movement to stop the execution. And through mass mobilization, through a lot of unity and a lot of coordination, we helped stop that execution. We did it. 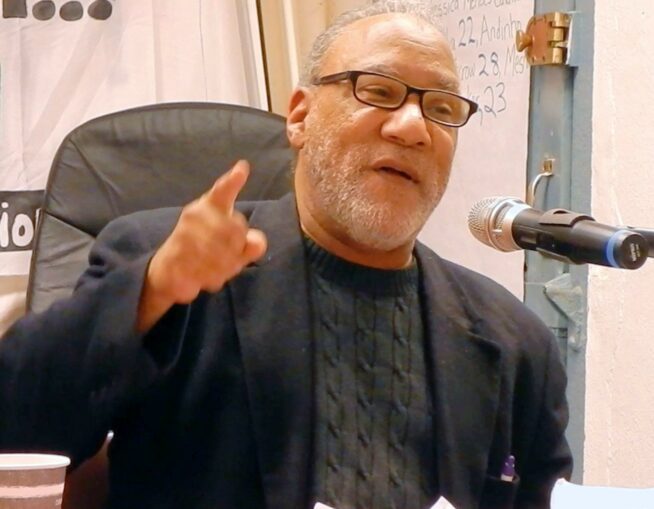 Since then, it’s been a long quarter of a century, almost 26 years. We have raised a bold, never ending, sometimes frustrating and disheartening struggle to free comrade Mumia, our political prisoner in jail, who was almost killed fighting for the freedom of the Black nation.

Now we face a similar situation in my view as one we faced in 1995, when there was an execution date for Mumia on the calendar.

We have to get him out of prison, comrades, and it must be now! There can be no hesitations. There can be no waiting. His health is such that Mumia’s birthday, about a month from this weekend [April 24] will probably be his last if we do not free him.

That says it all; that explains the critical moment that we’re in. Mumia must not be left to die in a dungeon. It’s what the police want. It’s what the Fraternal Order of Police wants. It’s what the oppressor wants. They wanted to execute him; they didn’t get that [in 1995]. So they stole 40 years of his life. Now, we must deny them the final victory of watching Mumia die in the dungeon.

‘By any means necessary’

Now, comrades, we have to do whatever is necessary, as Malcolm said, “by any means necessary,” to wake up the movement. A lot of good people, a lot of good leaders have come to Mumia’s support over the years, but they’re busy. They may not know about Mumia’s health.

We especially must wake up the Black movement. And I’m talking about all the wings of the Black movement — the militant Black Liberation fighters of every generation from Black Lives Matter to those of us who are the veterans of the struggles of many decades ago, when we had the Black Panthers and all the other forces that led us to where we are now. This includes the ministers, the civil rights forces, the leaders — many of whom are still alive. We’ve got to get them on board and make them realize that we’ve all got to realize that this is the time to act.

We are running out of time, comrades, so we’ve got to devise a plan. Part of that plan is already in motion. Many of you are working on the events that will take place, mass events, mostly in Philadelphia, around the birthday of Mumia near the end of April. We’ve got to come up with a strategy that brings all these forces together, not just in Philadelphia, but all around the country and all about the world with a conviction and a dedication to free Mumia.

Mumia is our hero, comrades. He’s one of our icons. He’s the most renowned political prisoner of the Black Liberation struggle in the world. This is not to take anything away from Imam Jamil Al-Amin, Mutulu Shakur, Ruchell Cinque Magee and all the other prisoners, political prisoners.

Look at it this way. How can we possibly free these comrades, if we cannot free Mumia now, when his life is at risk behind those bars? The chances of him dying in prison are 100 times greater than if we can free him. And he may have an opportunity to have a little bit of what’s left of his natural life. We’ve got to make it clear.

This is the moment to everybody who is responsible — politicians, governors, prosecutors, the Democratic Party — that if Mumia dies in prison, if you allow him to die in a dungeon, then this will be an unforgivable insult to the Black freedom movement. And anyone who is complicit in this, you will share this blame, this responsibility and consequences, and you will take them to your grave.

If we reach out to others, we must get them to understand this–that Mumia will walk out of that prison or, if necessary, be rolled out in a wheelchair free, and not die behind bars. That’s our revolutionary mission. At the moment, I can’t think of anything more important than that.

Mumia: more than a political prisoner

The struggle to free Mumia is in one way or another linked to consciousness about all the other political prisoners, because of his unique status as an international political prisoner in the struggle against white supremacy, racism, capitalism and imperialism in this country. This is how he’s known all around the world.

A little more than 20 years ago, I was privileged to share the stage with the late Ossie Davis, the actor, along with his partner, Ruby Dee. Ossie Davis told a large crowd of thousands of people in Madison Square Garden Theater in May of 2000, the millennium, that it was the mission of young radicals to free Mumia.  A lot of those young people he was speaking to then are now middle age.

Mumia may be more renowned because he is a political prisoner, because of the circumstances around being framed up and the fact that they did it because they were afraid of him, and they wanted to silence him.

But Mumia’s more than a political prisoner. To know Mumia, to have read not all of his works, but even just a few of them, is to have insight into his revolutionary brilliance, his intellectual insight. He’s a Black working-class, revolutionary intellectual. Mumia is a Black leader. He’s a bona fide global Black leader. I look at this from the point of view of history.

At this moment we face the prospect of Mumia expiring behind bars, and we realize that we must act now. We must look at it historically, because it will be remembered what was done, what was not done, who did it, who was unconscious, what was their excuse? And, of course, what the enemy did and how the enemy responded.

I truly believe, comrades, that after all this time — and many of us have been involved in the struggle for many decades now — I first met Mumia in 1996 — that we must be prepared to bust a move to take it to another level, to be prepared to make sacrifices, sacrifices that I can’t even speculate about or imagine.

If we get the seriousness of the moment, I believe we will all be called upon, no matter what we’re doing–and it’s all important business in the revolutionary struggle–to make some sacrifices now. Because it’s an old cliche, but it was never truer: For Mumia, it’s now or never.