On March 23, after a bipartisan Senate backrub, Boston Mayor Marty Walsh was confirmed as Biden’s new Secretary of Labor. Walsh — previously president of the Boston Building Trades Council — promised “a new era of cooperation between commerce and labor.” 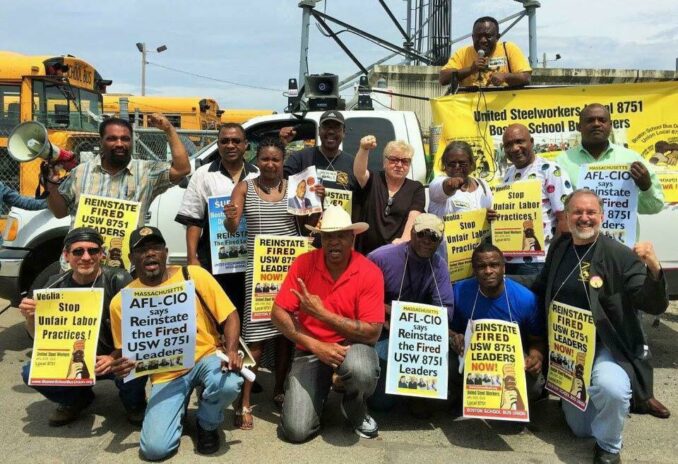 For nearly 40 years, I have been an elected leader of the 1,000-member-strong Boston School Bus Drivers Union, United Steelworkers Local 8751, a predominantly immigrant and Black local. During this time unions throughout the U.S. have seen declining membership and been put on the defensive, while the government and corporations broke unions beginning when President Reagan fired every striking air traffic controller in 1981.

Walsh’s confirmation as Labor Secretary leads me to ask the same question we posed directly to him in his mayoral office during life-or-death union struggles: Which side are you on?

During the first two years of Walsh’s mayoral administration — 2014 to 2016 — I and three other leaders of Local 8751 were fighting for our jobs after being fired by the private school bus management company, Paris-based Veolia/Transdev, in October 2013. It took us two years to force Walsh to “take a side” and settle with the union. His waffling occurred despite whispered promises made in response to two years of rank-and-file pickets, mass solidarity actions, fighting off a police frame-up, election of the four fired leaders to the union’s top positions and finally a strike deadline.

On May 31, 2020, Local 8751 was running the sound system during the Black Lives Matter march to Boston Common following the police lynching of George Floyd. Walsh’s police department, assisted by forces of the state and federal government, fired chemical weapons, violently arrested scores of people and rioted for hours against over 20,000 mostly young and peaceful protestors.

During our last contract negotiations held in Walsh’s “Eagle Room,” Local 8751 demanded that the words “Indigenous Peoples Day” replace “Columbus Day” in our paid holiday calendar. While this is the pattern in every neighboring city, the Boston mayor refused, telling us, “The people are not ready for that, yet.”

Walsh’s last mayoral act before departing to the Department of Labor was to order, under threat of termination, all union workers back into the Boston public schools — more than 10,000 teachers, bus drivers and monitors, custodians, food service workers and administrative staff. Walsh ignored strenuous objections from every union; meanwhile, the COVID-19 pandemic surges again in Boston’s oppressed communities.

Most of Local 8751’s members have now been forced to flee the skyrocketing rents in Boston as million-dollar condos rise on every corner. The Boston Globe reported that Boston’s Black families have an average net worth of just $8, compared to $250,000 for white families. (Dec. 12, 2017)

The struggle calls the question

Under the Trump years of police-state repression, giant monopolies of the high-tech capitalist system like Amazon and Uber/Lyft destroyed their competitors and spread like a virus. Now millions of gig workers and low-wage workers, especially in oppressed communities, depend on them for both employment and as consumers.

The struggle led by Black workers, facing off against police and corporate attacks across the country, has clarified the old question: “Which side are you on?” So how will Walsh respond?

On March 30, the National Labor Relations Board began tallying the union votes of nearly 6,000 predominantly Black workers at an Amazon distribution center in Bessemer, Ala., where close to half are women. But Walsh waffled about this attempt to form the first-ever U.S. union in centibillionaire Jeff Bezos’ Amazon. In a March 25 Washington Post interview, he said, “I’ve heard that organizing drive is going on. I look forward to seeing what the result of that is.” Even President Biden has spoken more strongly for the Bessemer workers.

Walsh had not one word to say about Amazon’s illegal tactics in Bessemer — captive audience meetings, Pinkerton-type lawyer interference, terminations of union advocates, propaganda in the bathrooms and the Unfair Labor Practice of “direct dealing” with employees threatened at home. These are blatant violations of long-established labor law that Walsh is now sworn to uphold.

Catalyzed by the Retail, Warehouse and Department Store Union in Alabama, now the Teamsters, building trades and postal workers’ unions are talking of challenging Amazon — and have set their sights on Uber/Lyft.

Right now is the time for every workers’ organization to force the question on Walsh and company — soon, perhaps even on the streets of D.C., with every resource and with the most vigorous street and legal offensive actions we can muster, in solidarity with Black workers on the front line — “Which side are you on?”

Steve Gillis began driving a school bus in 1985, has been a strike captain four times and arrested 13 times while representing the union. He is currently the financial secretary of Local 8751, having been elected to terms as president and vice president from 2003-2015.