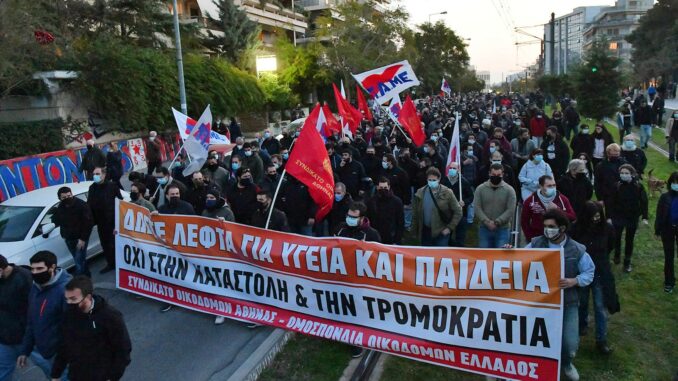 The banner of the Federation of Construction Workers (member of the All Workers Militant Front — PAME) at an anti-police violence march in Greece, March 9.

Behind the union banner of the Federation of Construction Workers of Greece bearing the slogan “Money for health and education! No to repression and intimidation!” 5,000 people — by police count — marched in Nea Smyrni on Tuesday, March 9. Nea Smyrni is a small suburb south of Athens.

Other banners read: “Cops out of our neighborhoods!” and “Parks are for laughing, not for hearing the words ‘I’m in pain.’”

A vicious March 7 beating that police inflicted on a young man who protested cops harassing families at Nea Smyrni’s town plaza went viral on social media. There were recordings of cops threatening to kill protesters, and a number of those altercations, some very intense, were posted on Twitter.

A major slogan in the March 9 protest was: “Intimidation will not work; the workers’ struggle will break it.”

Over the past months there have been many marches and protests in Greece, mainly by youth and students against police violence and repression. Prime Minister Kyriakos Mitsotakis called for calm on “both sides” Tuesday, but then, as social media posts showed cops acting with open viciousness, apologized to protesters in Parliament Friday and announced that all cops would be given body cameras. (tinyurl.com/3stej285)

Both the Greek Communist Party and SYRIZA, a center-left party that previously led the government, have members in Parliament. They are making reining in police violence a major political issue.

As part of a COVID-19 control program, the government requires anyone who wants to leave home during lockdown to get permission from police through a text message. This procedure hasn’t prevented COVID from currently spiking in Greece. (tinyurl.com/48kwc8c8)

The pandemic has completely disrupted Greece’s tourism, a major component of its economy. Greece has to control the pandemic inside the country to have any chance of recovering this sector.

But controlling COVID in Greece is not sufficient to boost the Greek economy. Since the 2008-09 worldwide financial crisis, Greece has been in a serious depression, the longest lasting of any developed economy. Under heavy pressure from the International Monetary Fund, big German and French banks and the European Central Bank, Greek governments of various political shades have imposed a series of harsh austerity measures on Greek workers, farmers and fishers.

Workers have fought back with a number of one-day strikes and occasionally with longer general strikes, which blunted some of the harshest austerity measures. The All Workers Militant Front (PAME), the union confederation that had a major role in the Nea Smyrni march, has been one of the workers’ organizations leading in the struggle against austerity.