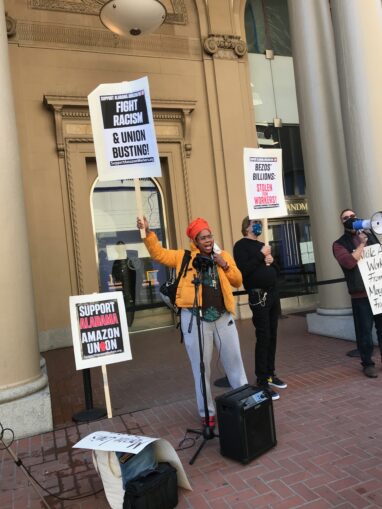 March 12 — Labor union and community members rallied today in front of the offices of Morgan Lewis, a law firm with offices in 31 cities around the world with a sordid history of union busting. Morgan Lewis was recently hired by Amazon to sabotage efforts by the Retail, Wholesale and Department Store Union (RWDSU) to organize Amazon workers in Bessemer, Ala.

Morgan Lewis has blocked union efforts by Amazon technicians since 2014 and has defended the company against lawsuits over unsafe working conditions during the COVID pandemic.

For six decades, Morgan Lewis has strategized to defeat union organizing efforts. Best known for its end run against the 1981 strike of the Professional Air Traffic Controllers Organization (PATCO) during President Ronald Reagan’s administration, most recently the firm has been hired to derail the Fight for $15 and a union effort.

A militant picket line organized by Support Alabama Amazon Workers-Bay Area chanted at the base of Market Street, “Union busting is disgusting!” Protesters took out their phones and called Morgan Lewis directly to demand the company end its attack on the RWDSU and Alabama Amazon workers.

Speakers at the picket line included representatives of the Oakland Education Association, the San Francisco Labor Council, Western Movement Assembly, East Bay Democratic Socialists of America and United Front Committee for a Mass Labor Party. A contingent of electricians from the International Brotherhood of Electricians joined the picket line.

As part of a national Day of Solidarity with the 85% Black workforce at the Alabama warehouse, the Support Alabama Amazon Workers-Bay Area committee is planning a car and bike caravan for 1 p.m., Saturday, March 20, through Oakland.

Other San Francisco Bay Area events that day include a 9:30 a.m. rally at the Brisbane Amazon facility and a 10 a.m. press conference at 7th and Berry Streets. in San Francisco — a site bought by Amazon for a future “logistics facility.” All events are listed at supportamazonworkers.org/march20/.