In direct confrontation with the U.S. ruling class’ monolithic drive to “reopen” schools and businesses, even as the pandemic continues to rage, Boston School Bus Drivers picketed their employer, Transdev, March 9. They gave voice to the outrage of frontline workers over this dangerous gamble with the lives of both the school children and the workers. 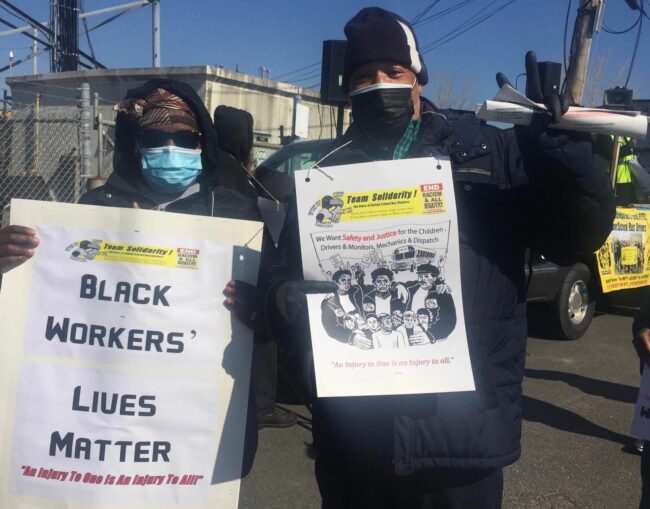 The school bus drivers are members of the 1,000-strong United Steelworkers Local 8751. Along with USW monitors and leaders of Boston’s labor movement, they shut down deliveries and normal operations at the headquarters of Transdev, the international corporation that manages the school buses. At their morning break, hundreds of drivers converged from their three bus yards with picket signs demanding, “Worksite COVID-19 testing & vaccines for school bus workers NOW!” and “Transdevil’s $billions: stolen from workers!”

Television, press and radio reporters jammed the scene, drawn by a rapid-response press release from Local 8751, which alone among Boston unions has called out Boston’s mayor and President Joe Biden’s pick for Secretary of Labor. The release explained: “On March 1st Mayor [Marty] Walsh has ordered a reopening of K-3rd grade, in addition to the current 7,000 [High In-Person Priority] students, with over 10,000 workers forced into all buses and buildings under threat of our jobs. At the same time, on Feb. 1st Transdev/BPS unilaterally implemented across-the-board pay, benefit and budget cuts on school bus drivers already facing severe pay cuts and dangerous working conditions.” 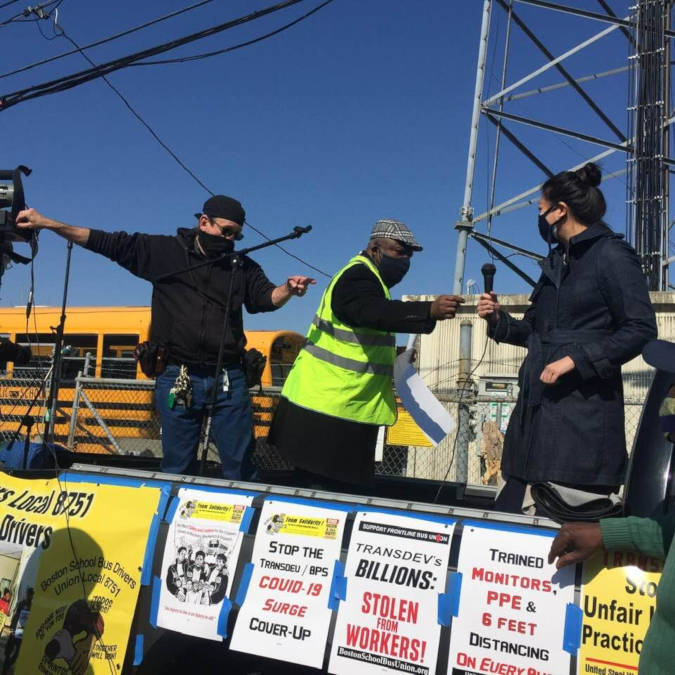 Local 8751 President André François fired up the physically distanced, masked-up crowd, blasting Transdev and BPS management with the warning, “Union busting’s got to go!” The Dorchester Art Project pumped people up from their sound truck with Rebel Diaz’s “Which Side Are You On?” and Haitian, Cabo Verdean, Chilean, Irish and Black liberation songs of workers’ struggles.

Jessica Tang, president of the 8,000-member Boston Teachers Union and education advisor to incoming interim-mayor Kim Janey — the historic first Black mayor of a city long known as the “Selma of the North” — demanded immediate enforcement of COVID-19 vaccinations and emergency protocols, such as a monitor on every bus. Tang slammed state government officials for their rushed, discriminatory orders: “We are all one network, one community. If one of us is not safe, then none of us are safe!”

Darlene Lombos, executive secretary-treasurer of the Greater Boston Labor Council, two days earlier had voted “Hell No,” along with parent and student reps, to giving state authorities punitive powers to fully reopen all Massachusetts schools. “It’s unions who have the solutions and a plan for vaccinating all essential workers. We demand the governor listen to the teachers, the bus drivers, the fire fighters, now!”

Al Vega, president of USW Local 9358 and the decades-long leader of the Massachusetts Coalition for Occupational Safety and Health, demanded “immediate Transdev compliance with health and safety guidelines and worksite testing and vaccinations programs.”

John Buonopane, International USW District 4 staff representative and president of a fighting local of gas workers, put Transdev and the city on notice that they’re going to pay for their unfair labor practices and neglect of drivers’ health and safety. “We’re showing Transdev in the street today that you don’t mess with Local 8751!” 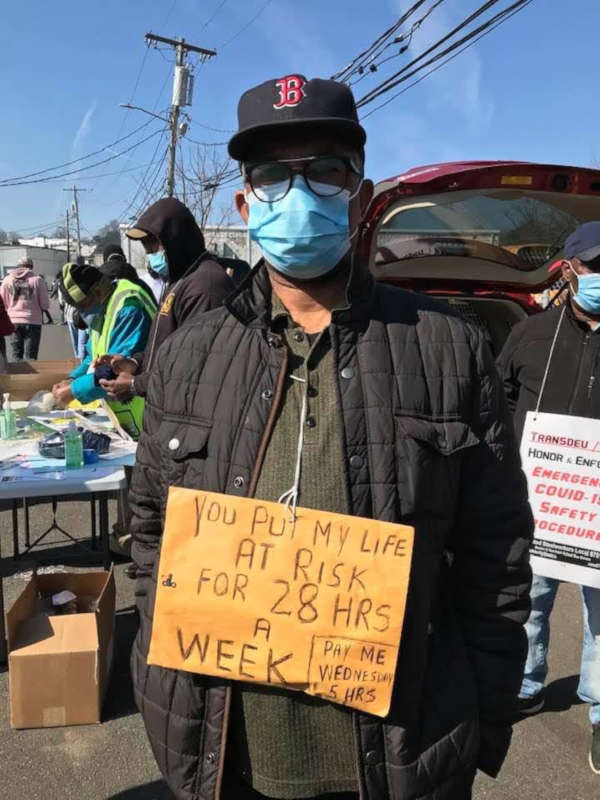 Last October, Walsh had reopened schools to a limited number of students whom the district termed “High In-Person Priority.” The mayor then shut down, reopened, shut down again, and in February suddenly announced a full reopening of the schools in the spring. Meanwhile, school bus workers have suffered more than 40 positive cases, with dozens of quarantines, but the authorities have refused to publicize this. They scoff when their actions are described as a “cover-up,” then send late-night, obscure email notices about the latest infections, to fulfill their legal liability.

In just a few days, the bosses’ forced economic “reopening” has resulted in a virus increase in greater Boston — buried in articles headlined about shortages of Big Pharma’s vaccines for school staff. This fourth surge had been predicted by President Biden’s own director of the Centers for Disease Control, Dr. Rochelle Walensky of Massachusetts General Hospital, but was ill-advisedly ignored by his own Acting Secretary of Labor, Al Stewart.

In the midst of pandemic-era budget cuts — which have seen the take-home pay of Boston school bus drivers hammered by a gross $400,000 per week due to the bosses’ contrived “hybrid” transportation schedules — Local 8751 is preparing for potentially brutal contract negotiations.

Combined with Transdev’s “efficiency” and “profit” motivations, the city budget is now whacked into deficit spending by the capitalist economic crises of mass unemployment — officially 8% in Massachusetts — and the bankruptcy of its tax base: small businesses, nonprofits, and educational, arts and cultural employers.

The Biden administration’s “rescue” package relies on forcing labor back to work on its concessionary terms — which include miserly checks for workers but billions to bail out Wall Street.

In this context, the Union Power picket March 9 was a successful dress rehearsal for the life-or-death struggles coming for workers this spring.

Powerful photos and livestream highlights of the March 9 action are posted at BostonSchoolBusUnion.org/UnionPowerPicket.