San Francisco — Waving Haitian flags, a crowd of 80 demonstrated March 1 to mark the anniversary of the bloody U.S.-backed coup d’etat in 2004 that overthrew the popular government of Jean-Bertrand Aristide. The beloved former president was kidnapped and flown to Africa on a U.S. military plane, beginning a seven-year period of forced exile from Haiti. 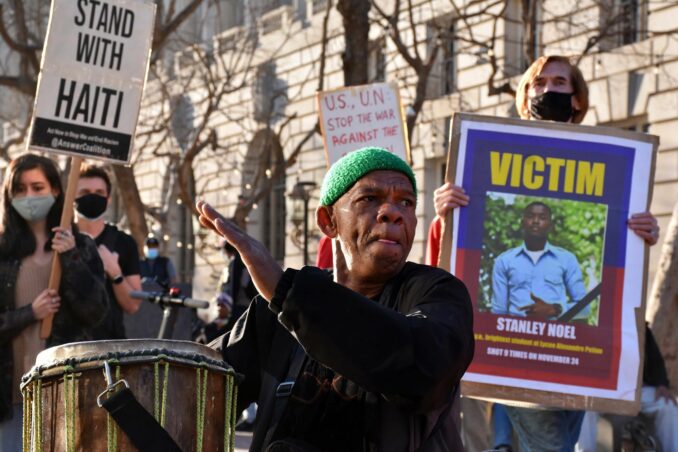 Carrying hand-lettered signs, demonstrators protested the serial massacres in working-class neighborhoods in Haiti, the arbitrary arrests, detentions of human rights defenders and the wave of kidnappings for ransom connected to the current coup regime of the dictatorial Jovenel Moїse, backed by the U.S. government.

The protest began at the library across from City Hall and marched to the Simón Bolívar statue, highlighting the historical solidarity between Haiti and all the Americas. The closing rally was at United Nations Plaza, where marchers denounced U.N. complicity and armed support for the brutal coup regime that has been imposed on the Haitian people. Haiti was a founding member of the United Nations.

The San Francisco action is part of a month-long campaign by Haiti Action Committee and allies to increase Haiti visibility, including banner drops over freeways in Oakland, San Francisco, Berkeley and Palo Alto.

Demonstrators demanded: End U.S. and U.N. support for the dictatorship of Jovenel Moїse; end recognition of the Moїse government of Jovenel as of Feb.7, 2021, as required by Haiti’s constitution; stop funding of the criminal Haitian police and security forces; and stop ICE deportation of Haitians.