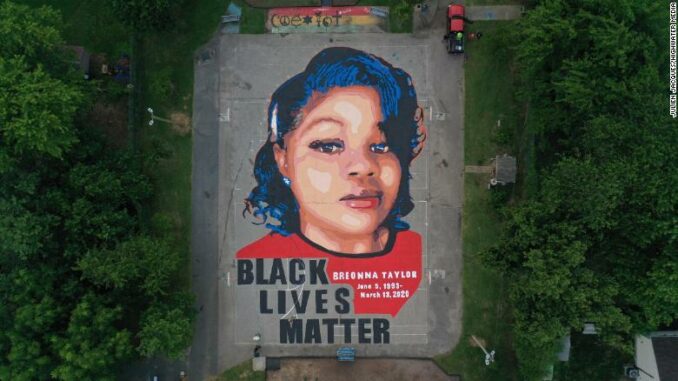 Breonna Taylor was honored with a 7,000-square-foot mural in Annapolis, Md.

Taylor was shot multiple times while laying in her bed, when the police attempted to conduct a “no-knock” warrant for a phony drug bust at Taylor’s house. None of the police, including the one who fired the bullets that took Taylor’s life, were arrested or indicted for murder — not even manslaughter — by a Kentucky grand jury last September for this despicable act.

Taylor lost her life exactly two months and two weeks before a 46-year-old Black man, George Floyd, was publicly lynched by a white cop who applied pressure on his neck for almost nine minutes, until he lost consciousness and died for the entire world to see.

Millions of people inside the U.S. and worldwide organized daily rebellions and protests, including burning down a police station in Minneapolis to express their outrage over the systemic racism, especially the police terror that runs rampant in Black and Brown communities.

It was in the summer of 2020 during the upsurge in protests that activists outside the Louisville community learned about Taylor’s death, which then became a main focal case for the Black Lives Matter movement around the country. National Basketball Association players, both women and men, wore warm-up T-shirts and sneakers with portraits of Breonna Taylor, demanding justice during their playoffs. NBA coaches wore similar shirts featuring her name.

Tennis champion, Naomi Osaka, wore a different mask for every match she played during the U.S. Open. Each mask included the name of someone who lost their lives like Taylor to help bring awareness that Black and Brown women are also victims of racist police violence.

It is important to use the occasion of Women’s History Month to keep in the forefront of the struggle names of Black and other women of color who bear the brunt of systemic racism and gender oppression of all forms, not only in the past but in the present. Breonna Taylor — #SayHerName.