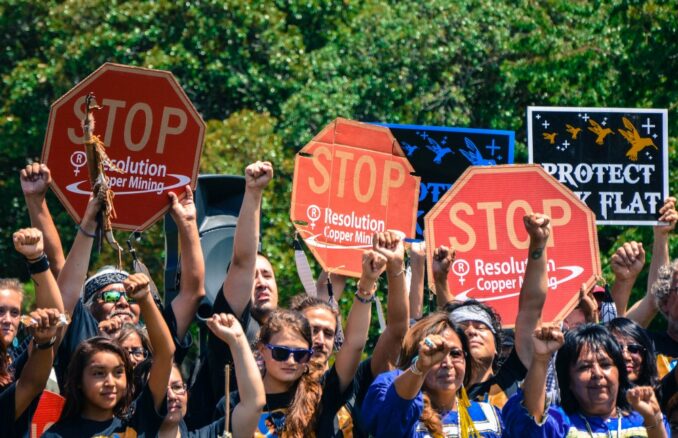 Apache Stronghold activists opposing copper mine gather outside the Arizona Chamber of Commerce in Feb. 2020.

OAK FLAT, AZ — This afternoon [March 5] the 9th Circuit Court of Appeals denied Apache Stronghold’s appeal of U.S. District Court Judge Steven Logan’s Feb. 12, 2021, ruling. The Appellate Court refused to grant Apache Stronghold’s request on a 2-1 vote because of the Forest Service’s last-minute March 1, 2021, withdrawal of the Final Environmental Impact Statement. Prior to this withdrawal, the giveaway of Oak Flat would have happened by March 11, 2021. The Appellate Court fell for this Forest Service ploy although Appellate Judge Bumatay observed, “The Supreme Court recently suggested we do not acquiesce to such tactics.”

Nonetheless, the Appellate Court ruled that because, “[t]he Government has also stated, under penalty of perjury, that USFS ‘will provide 30-days advance notice’ to Apache Stronghold prior to the publication of a new FEIS. These representations mean that Apache Stronghold has not shown that it ‘needs relief within 21 days to avoid irreparable harm’ pursuant to its request for an emergency stay.”

But they added, “[a]n examination of the merits of Apache Stronghold’s request for a preliminary injunction — denied by the district court and currently pending on appeal — is therefore premature. We express no view on the merits. The previously established briefing schedule remains in effect.”

“The Apache Stronghold makes the United States retreat on the giveaway of our sacred Chi’chil Bildagoteel. This ruling was not unexpected,” said former Chairman of the San Carlos Apache Tribe and Apache Stronghold leader Dr. Wendsler Nosie, Sr. “We are greatly encouraged by the fact that the Appellate Court is moving ahead to listen to our concerns on an accelerated timetable ending by May 6. It’s been nothing but a nightmare from day one.”

“For a great many people, religious and spiritual tradition is among their most precious inheritances. The Western Apaches are no different. For hundreds of years, they have worshipped at a location in Arizona’s Tonto National Forest believed to be the most sacred of grounds — Oak Flat. . . . It is no overestimation to say that Oak Flat is the spiritual lifeblood of the Western Apache peoples, connecting them to the Creator since before the founding of the Nation. . . . Congress has commanded in no uncertain terms that the government may not substantially burden religious exercise but for a compelling reason and with the narrowest of means. See 42 U.S.C. § 2000bb-1(a). . . . This is an obvious substantial burden on their religious exercise, and one that the Government has not attempted to justify. And the Government’s eleventh-hour promises of delay and consultation with the Western Apaches are not enough to allay the threat of irreparable harm. The law affords the Western Apaches more than promises. . . . Apache Stronghold has established a strong likelihood of success on the merits.”

“Judge Gorsuch wrote, a substantial burden exists when the government ‘prevents the plaintiff from participating in an activity motivated by a sincerely held religious belief.’ . . . With that in mind, this is not a difficult case. . . . Resolution Copper’s mining activities won’t just temporarily exclude the Western Apaches from Oak Flat, or merely interrupt the worship conducted there. Instead, Resolution Copper will turn Oak Flat into a crater approximately 2 miles across and 1,100 feet deep. . . . The Western Apaches’ exercise of religion at Oak Flat will not be burdened — it will be obliterated. Simply, the conveyance of the land will render the core religious practices of the Western Apaches impossible and their primary method of experiencing the divine nonexistent. . . . Our Constitution and laws have made the protection of religious liberty fundamental. Apache Stronghold has clearly established that the religious exercise of the Western Apaches will be substantially burdened by the Government’s actions here.”

“The U.S. Government’s last-minute pickup of its dirty dealing at Oak Flat just temporarily paused the emergency before the 9th Circuit Court,” said Apache Stronghold attorney Michael Nixon. “While the Government reshuffles, we look ahead to a straighter deal in court, both for the Apaches’ religious freedom and for their 1852 Treaty rights to the land at Oak Flat.”