Think 1956. That’s 65 years ago — the year this writer dropped out of college and took a full-time job in a warehouse to get a more important education: learning what it was to be a worker. 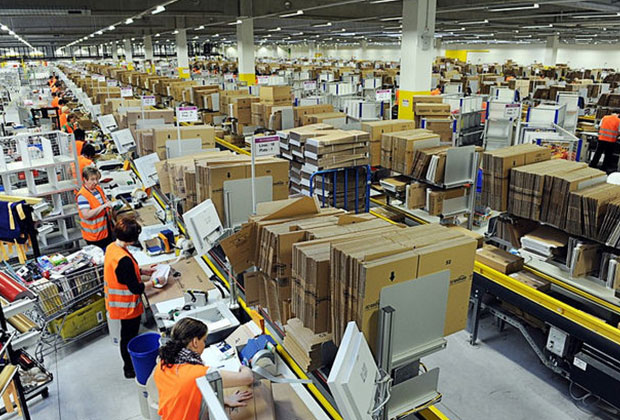 In these intervening years, millionaires have gone on to become multimillionaires to now become centibillionaires. Many warehouse workers still barely survive on the minimum wage.

Learning about the struggles of today’s Amazon workers for better wages and working conditions brings up dusty memories of those days.

I worked as an order picker in a drug warehouse in Buffalo, N.Y. Anything that could be sold in a drugstore was kept there. It was a huge place, the ceiling way above the cold concrete floor where we filled the orders. That allowed the foremen and the superintendent to keep an eye on us from their heated offices high up at one end.

On the warehouse floor there were rows and rows of steel shelving where the merchandise — ranging from heavy cartons of gallon jugs to teeny, tiny pill bottles — was housed. In the center of this huge space was an oval moving track on which carts carried the orders. The whole area was divided into ten sections, A to J. A team of workers examined the orders for each cart and flipped down the letters of the sections where the items could be found.

This team of workers had a nice sitting job. But it also required an encyclopedic knowledge of the warehouse, knowing the proper section letters for 10,000 different stocked items.

Order pickers never got to sit. We looked for carts showing our section (I still remember; ours was section H), pulled the cart off the moving track and walked through the shelving to fill our part of the order. It just so happened that I had been put in a section that had more teeny, tiny bottles in it than any other, so remembering where they were was mind-racking. I had anxiety dreams for weeks about looking for items. But my fellow workers kindly helped me out.

It wasn’t as dangerous as working in a steel mill or a chemical plant, but we had casualties — heavy carts tipping over or straining our abdominal muscles lifting heavy boxes off high shelves. Almost all the order pickers were women, and we felt it especially on days we had our period.

We wore pants, not skirts. I liked that, but the reason we were ordered not to wear skirts was so we wouldn’t accidentally knock a little bottle off a shelf. When we went to union meetings, all the women dressed to the nines.

A bad flu epidemic started in the fall of 1957. For months, we worked our asses off trying to fill all the orders before going home. The workers started talking about how we would certainly get a Christmas bonus. (Starting pay was just a dollar an hour.) We knew the company was rolling in dough, because of the extra business due to the flu.

In all that period, we got only two hours of overtime. And there was no bonus — just a tender thank-you card from the management. It was after this insult that pilfering started. (We all knew that one of the foremen wore elastic stockings so he could stuff expensive pill bottles into them. If you looked down the rows of shelves, you’d often see him stooped over, “adjusting” his socks. He had a buyer somewhere on the outside.)

What really enraged the workers was what occurred after a leak developed in the roof, damaging the packaging on many items. The women told management they would like to buy some of the expensive beauty items at cost, but instead the bosses had all the jars and tubes destroyed.

All this happened even in a place where we had a union. Nonunion workplaces were much worse.

The class war will continue until this rotten capitalist system is brought down. In the meantime, fight to get a union — and if you already have one, fight to make it fight!