Students for a Democratic Society, Jewish Voice for Peace and the Denver Peace Council held a demonstration Feb. 20 at the state capital, in cooperation with the national call to prevent Washington from instigating a war against Iran. Threats the U.S. warships would move into the Persian/Arabian Gulf have increased fears of a new war. 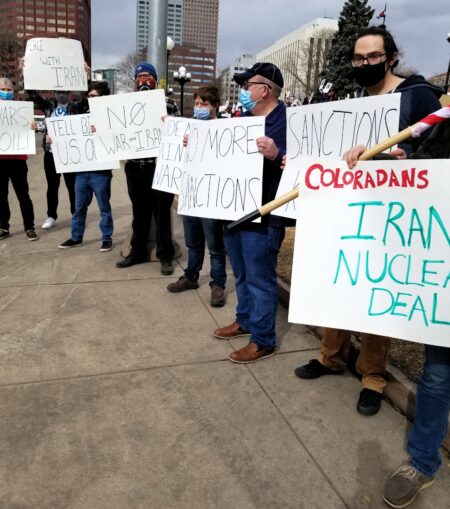 Washington’s history of intervening in Iran includes overturning Iran’s elected  government in 1953 and placing Shah Reza Pahlavi in power. After the 1979 Iranian revolution, the Tehran government retook control of its oil. In the hope of returning Iran to colonial domination, the U.S. government has instituted harsh sanctions during the pandemic, causing death and suffering among Iranian people.

U.S. sanctions prevent Iran’s government from trading oil for food and medicine that its people need. After the Trump administration pulled the U.S. out of the accord that dropped sanctions in return for allowing inspections, Tehran has no confidence in agreements with the U.S. They ask that sanctions be lifted as a show of good faith.

The antiwar movement must continue pressure on the Biden administration to end the sanctions. It should expose and loudly oppose U.S. military threats.