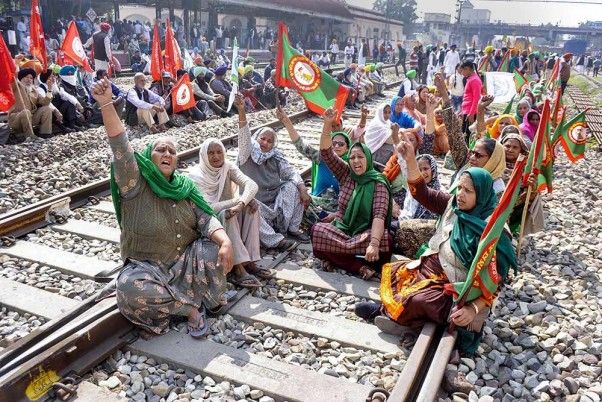 Women in India block train tracks in solidarity with farmers.

Bhajan Singh, district president of Karntikari Kisan Union-Gurdaspur, told The Wire that the purpose of the protest was to counter the government’s narrative that demonstrations were happening in only two provinces: Punjab and Haryana. Moreover, Singh said, protesting on the nationwide network of railway tracks would demonstrate that the uprising is happening all over the country. (The Wire, Feb. 18)

Indeed, demonstrators participated in train stoppages in many parts of the country.  During the action, protesters showered passengers with flowers and offered them tea.

As the rail roko protest proceeded, activists were arrested in Madhya Pradesh, Bihar, Karnataka and Telangana. (Business Today, Feb. 19) However, the protesters were able to successfully complete the demonstration. While the people continue to build the movement in India, it is important to assess the growing state-sanctioned terror within and beyond India’s borders.

After the farmers’ successful Republic Day action, Rihanna, Barbadian singer, actor and business owner, tweeted an article about the uprising with the caption: “[W]hy aren’t we talking about this?!” It heightened international attention to the farmers’ struggle. (NBC, Feb. 4)

India’s elite, who work in the service of the right-wing ruling Bharatiya Janata Party (BJP), were quick to respond with racialized and gendered attacks against her. (tinyurl.com/4q6cwy5g) As mentioned in a Workers World article posted  Aug. 17, 2020, anti-Black racism is rampant in South Asian communities, and some of their members have contributed to reproducing harmful stereotypes that target Black women. (tinyurl.com/1ae6d42k)

Within India’s borders, the state is using a colonial-era draconian “sedition” law to criminalize organizers who are in solidarity with the farmers’ uprising. On Feb. 13, 22-year-old climate activist Disha Ravi was taken into custody for allegedly assisting in creating and distributing a “toolkit” supporting the ongoing protests. (Teen Vogue, Feb. 20)

While the toolkit mirrors other resources used to raise awareness about the farmers’ struggle, the government alleges Ravi has ties to separatist groups and was attempting to promote rebellion against the country.

This is not the first time India’s government has used the criminal punishment system to silence dissenters. At the height of the Anti-Citizenship Amendment Act protests, the state kidnapped and caged prominent student activist Sharjeel Imam, Meeran Haider and many others, to disenfranchise the youth and deter them from joining in the struggle against xenophobia and police terror, reported WW Sept. 2, 2020 (tinyurl.com/3l53x7io).

While celebrating each of the farmers’ wins and their push towards self-determination, it is crucial to recognize the state’s attempt to shatter the youths’ imaginative efforts towards achieving revolution.

In a talk to the movement, Black Panther Party co-founder Huey P. Newton said: “The revolution has always been in the hands of the young. The young always inherit the revolution.” (tinyurl.com/19ukwmse)

To ensure that we radically transform our current conditions into an inclusive and sustainable future, we must protect the youth and support their commitment to the struggle. Let us show deep solidarity with Disha Ravi, Sharjeel Imam, Meeran Haider and every dissenter who is imprisoned for daring to struggle against oppressive and barbaric forces.