As a massive winter storm swept across the U.S. last week, knocking out power from Oregon to Texas to the East Coast, millions of people found themselves in a desperate situation: no electricity, no water, no transportation and life-threatening cold — all in the midst of a global pandemic. 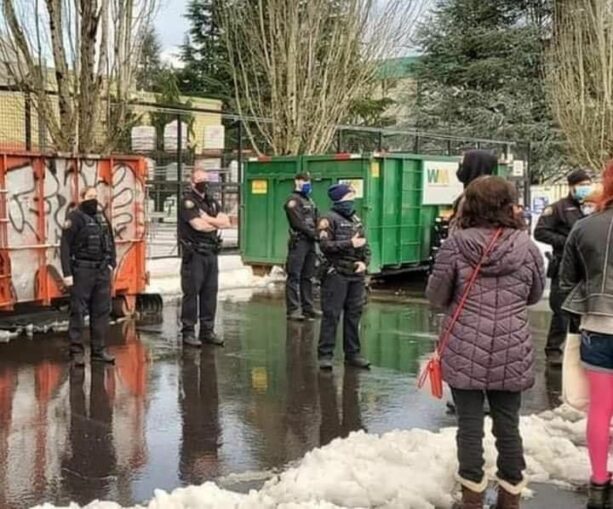 Over 300,000 people in the Portland metro area alone lost power in Oregon’s largest power failure in decades. Grocery stores without electricity began throwing out refrigerated and frozen foods, and at a Kroger-owned Fred Meyer store in Northeast Portland, nearby residents began retrieving discarded food from a large dumpster outside.

Fred Meyer management claims they normally donate food to charities, but icy road conditions prevented food pantries from safely reaching the store. They claimed the discarded food posed a food safety risk — despite the temperature outside being colder than the inside of a cooler — and barred access to the food.

Citing fear of a “physical confrontation” as a result of management’s decision to deny dumpster food to hungry residents, the store called the police. Many of those present in the crowd were regular Fred Meyer customers who simply needed food and had no other option than to try and retrieve it from the dumpster.

The Oregonian newspaper reported Feb. 18 that “a dozen officers arrived at the scene. One officer wasn’t wearing a mask and refused to put one on until a supervisor arrived.” Police then began to threaten the crowd, which fluctuated between 15 and 50 people, with arrest, even threatening to arrest a journalist with a visible press badge who arrived to document the situation.

Police said they were at the store to “restore order.” And in a way they were right: “Order” under capitalism looks like big corporations throwing away food during a disaster instead of giving it to people in need. Capitalist “order” means the rich grow richer during a pandemic, while millions fall into poverty, and hundreds of thousands perish. It means constant warfare, immigrant concentration camps and racist police terror.

“Order” apparently does not look like meeting the people’s needs by any means necessary during an emergency, but rather protecting private property, even if it’s bound for a landfill and will never be sold for a profit. In Texas, electricity was kept on in downtown areas, heating empty office towers, while neighborhood after neighborhood was plunged into darkness and cold. Pictures of glowing downtowns surrounded by seas of darkness quickly made their way around the internet, prompting outrage and anger.

The scene that played out in Northeast Portland is one we’re repeatedly told doesn’t happen here. Mainstream media will gleefully show pictures of food shortages in countries like Venezuela, which are under crushing U.S. sanctions, but even the highly sensationalized reports there never show Venezuelan police guarding dumpsters and threatening mass arrests for anyone attempting to take discarded food.

Vietnam, which U.S. media and government agencies denigrate as an “authoritarian” regime that does not respect human rights, set up rice-dispensing ATMs during the beginning of the pandemic, where anyone could get free rice. Vietnam mounted a successful response to COVID-19, and the country has avoided food insecurity.

If this story from Portland played out in China, Cuba or any other “enemy” of the U.S., it would be cited as definitive proof of their failure. It would be front-page news, and we would hear speeches from elected officials about the need for “humanitarian intervention.”

The U.S., despite having the world’s largest economy and military, still fails to meet peoples’ basic needs — to such a degree that people will confront cops to get food from dumpsters.