The novel coronavirus has claimed an unlikely victim in the United States: the Sixth Amendment. The right to a “speedy trial” is in critical condition.

Philadelphia’s county jail population has risen to 4,500 and is growing steadily. Half of those behind bars have “detainers,” meaning they aren’t eligible for bail, often due to prior convictions. Philly courts have a backlog that has surpassed 13,000 cases. 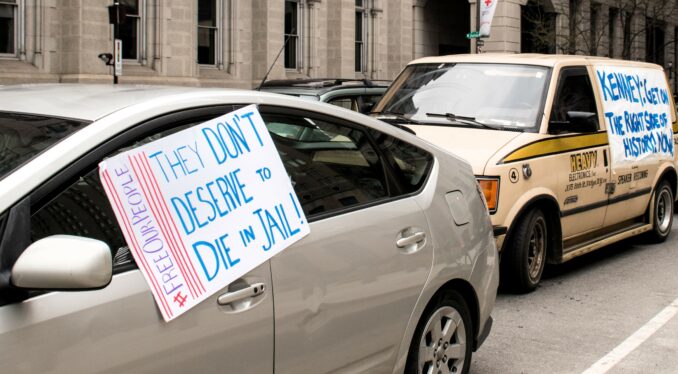 Thousands of cases on that backlog are scheduled for a hearing in “Room 200” of Philly’s “criminal justice” building in Center City, a courtroom that does not exist. Room 200 is used as a technical work-around to “schedule” hearings that will not take place.

By last December, there were already more than 800 cases of coronavirus in Philly jails. This COVID outbreak led courts to completely suspend all in-person hearings indefinitely.

The city’s Defenders Association petitioned the Pennsylvania Supreme Court to address this crisis, arguing that “Because nearly all court hearings and trials have either stopped or slowed to a trickle, each petitioner, and hundreds of others like them, have been unable to contest the basis of their confinement.”

Meanwhile, District Attorney Larry Krasner is seeking reelection this year. However, progressives who campaigned for him in 2017 have lambasted him for betraying campaign promises for criminal justice reform and for his relentless attempts to block justice for Mumia Abu-Jamal.

At the same time, the right wing, including outgoing U.S. Attorney William McSwain and the Fraternal Order of Police, accuses Krasner of not prosecuting enough people nor pushing for harsh enough sentences.

Now Krasner’s office regularly asks judges to set bail at $999,999. He’s demanded similar million-dollar bail amounts for half of all cases that come through his office, according to the Defender’s Association. It goes without saying that oppressed people targeted by the police in Philadelphia, the poorest big city in the U.S., cannot afford to post even 10% of that amount.

It saves the district attorney’s office a great deal of resources not to be required to assign lawyers to jury trials to prove a defendant’s guilt. And with so few cases being scheduled during the pandemic, Krasner is presumably looking for ways to bolster his crime-fighting bona fides for his reelection campaign later this year. So after torturing workers in festering, virus-ridden jails for months and months on end, Krasner then offers them plea bargains — whether they’re innocent or not.

‘They kind of broke me’

Phil Ingram, 31, who has been held in jail since May 2020, was arrested for allegedly participating in “looting” during the George Floyd protests. Despite declaring his innocence, he’s now seriously considering taking a plea deal.

“At this point, they kind of broke me,” he told reporters. “I just want to get out of here.” (Philadelphia Inquirer, Jan. 28)

Kalief Browder was a child when he was arrested and held for two years in solitary confinement at Rikers Island, N.Y., without trial. Browder killed himself in 2015 at the age of 22, just two years after his release.

Malik Neal, executive director of the Philadelphia Bail Fund, wrote: “Courts are supposed to set cash bail only to ensure that people return to court for their hearings. But in Philadelphia, the poorest big city in America, it’s often impossible for people to pay the 10% of their bail needed to secure their freedom. They risk losing their jobs, their housing, their custody of children and, with the pandemic, their lives.” (New York Times, Feb. 4)

San Francisco District Attorney Chesa Boudin has gone farther than Krasner and likely has genuine reform as his goal, rather than careerism. Boudin is the son of long-term political prisoners; his mother served 22 years and his father remains in prison. But even Boudin’s bail-reform policy, wrote Colin Doyle, “reveals how tough-on-crime norms limit the contemporary vision of progressive prosecution. Boudin’s office will continue the practice of assessing risk to justify incarcerating legally innocent people for their future crimes. It has defended this approach with unproven appeals to public safety and predictive accuracy, that in a prior era of bail reform would have been seen as an intrusion on fundamental civil rights.” (The Appeal, Jan. 30, 2020)

Especially after last summer’s uprisings for George Floyd, Breonna Taylor, Walter Wallace Jr. and all victims of white supremacy, the working class understands that this system cannot be reformed. Concessions are no longer enough. The workers, on both sides of the prison walls, demand abolition.

Consider the thousands of workers who are currently incarcerated, not on the basis of guilt or innocence, but for political expediency. Shouldn’t these workers be considered political prisoners?