COVID-19 is an evolving catastrophe for the world’s working class. You may think you have read all that can be said about the virus and can’t bear to read one more thing – even though you follow it closely every day. So it will surprise you to learn that there is significantly more to read.

Two new books are “Planète Malade” and “Capitalism on a Ventilator: The Impact of COVID-19 in China and the U.S.”  Published in French and English, respectively, they include information and analysis that is missing from much of the big business media. They compare how capitalist and socialist countries have responded to the pandemic.

While these books come from different political traditions, what is striking is how frequently they agree. “Planète Malade” comes out of the anti-capitalist, socialist movements of Western Europe – France, Germany and Belgium being most prominent.

‘Capitalism on a Ventilator’

“Capitalism on a Ventilator” is an anthology of writings by more than 50 authors.  They include Vijay Prashad (Tricontinental), Max Blumenthal (Greyzone), Margaret Kimberley (Black Agenda Report), Margaret Flowers (Green Party) and political prisoner Mumia Abu-Jamal. Its editors are Sara Flounders, director of the International Action Center, and Lee Siu Hin, director of the China-US Solidarity Network.

Flounders’ introduction begins: “The United States is reeling from a triple crisis: the COVID-19 pandemic that has inflicted over 4.4 million confirmed cases … the most of any country in the world. Beyond this pain, suffering and death, over a million workers a week have filed for unemployment [benefits] ever since April. … [M]illions of people all over the country have marched and protested racism and systematic abuse of police power.”

Updating the statistics cited by Flounders, as of Feb. 8 there have now been 27.6 million cases of COVID-19 and 475,000 deaths in the U.S. (Worldometer) Many epidemiologists say even these figures are significant undercounts.

Flounders calls out Republican and Democratic politicians in the U.S. for scapegoating China, the first country to identify COVID-19 among its population.  Washington’s blaming China for the pandemic is in line with U.S. imperialism’s confrontational economic and diplomatic policies toward that country.

Articles in the “Ventilator” anthology emphasize the need to refute widespread anti-China and anti-Asia rhetoric. The writings discuss the political environment surrounding the pandemic, and examine how greed, hypocrisy, and incompetence fueled by racism have infected the woefully inadequate, horrific U.S. response.

Striking articles in the anthology explain how systemic racism in the U.S.  intertwines with the pandemic. Black, Latinx and Indigenous communities have  disproportionately suffered from illness and death. A piece by Abu-Jamal describes this spiraling disaster.

Essays explain how China warned the world about the virus even as Wuhan residents first fell ill. It shared scientific data and aided many countries with desperately needed medical supplies. Then Trump and the corporate media viciously blamed China for the pandemic. European governments viewed China’s swift, effective response with disdain.

Lee Siu Hin’s article, entitled “Corporate Theft of COVID $$,” describes the Small Business Administration’s COVID-19 Paycheck Protection Program. The loan program was allegedly intended to provide relief to preserve small businesses and their jobs. But the PPP provided “a payout for the rich and connected with only tip money for a small business.”

This article lists pages of payouts: to Ivanka Trump’s father-in-law Charles Kushner, to generals, lawyers, billionaires, and big media outlets, to Catholic archdioceses, to businesses owned by Transportation Secretary Elaine Chao’s family and others owned by Paul Pelosi, spouse of  House Speaker Nancy Pelosi, and to a host of other politicians and wealthy individuals. PPP loans, which were mostly to be forgiven, were just another way for the obscenely rich to further profit from the COVID crisis.

The book begins by asking two key questions: “With another strategy, would we have been able to save most of Covid’s victims, considerably diminish the general agony and quickly relaunch our economies? Why did some countries succeed while ours didn’t?” 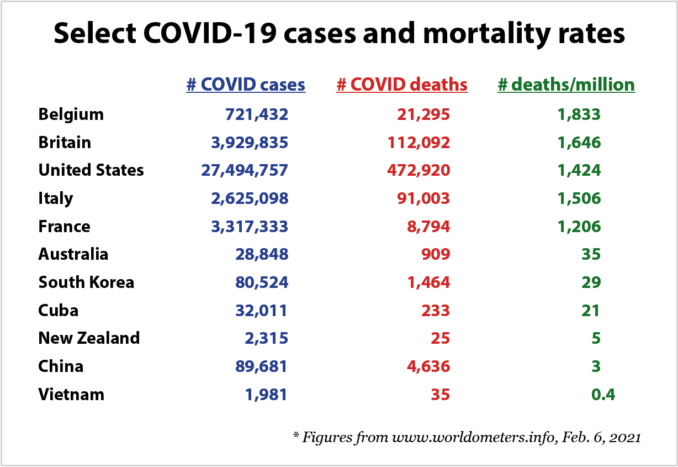 In an interview with “Le Drapeau Rouge,” the Belgian Workers Party publication,  Collon makes this point sharply. Europe and the United States have a combined population of around 700 million people and have suffered about 700,000 deaths. Seven countries in East Asia, including China and Vietnam, with a total of 1.52 billion people, have had around 7,000 deaths. Why has there been such a disparity in outcomes?  What is especially striking is that this pandemic first spread in China.

Collon interviewed Aziz Salmone Fall, an academic and activist in Montreal. Fall describes a post-colonial Africa where people in many countries suffer from endemic health conditions, including malaria, due to hunger, bad water and impoverishment.

For decades, the imperialist International Monetary Fund and the World Bank, seeking to ensure corporate profits, ruthlessly forced African economies into austerity.  This resulted in hollowed-out public health systems and governments unable to offer their people emergency economic support during the pandemic.  Fighting COVID will burden the future, hampering development and even their response to ordinary public health needs.

Collon interviewed the eminent French mathematician Laurent Lafforgue on the mathematics of coronavirus replication. His interview appears early in “Planète Malade,” and provides a critical tool to explain why the responses of most countries were doomed to fail, while a few countries were very successful in holding the pandemic at bay.

Lafforgue says that if one infected person infects just two other people in a week, by the second week these two people would infect at least two additional people. By the end of the tenth week, at least 1,024 people would be infected from the initial two people. Without quarantining or some method of interrupting the chain of transmission, this progression is inevitable and immutable because this coronavirus is spread through the air.

Lafforgue’s explanation is important to grasp. While it is not news to mathematicians and epidemiologists, it was apparently ignored by most political leaders who made, or failed to make, vital policy decisions in response to COVID.

Why a rapid response is necessary

This means in practice that the rapidity with which governments move to control the spread of SARS-CoV-2, the virus that causes COVID-19, determines the outcome. Several measures can be implemented immediately to interrupt transmission: wearing masks, social distancing, testing and tracing.  But the most  significant variable is how quickly governments act to impose controls to break the chain of human contact and transmission.

Once the existence of a dangerous contagious disease was known, government officials who failed to act were derelict in doing their jobs. They needed to act immediately. They should have been able to implement an emergency strategy, but instead did nothing and looked for scapegoats.

The delays meant that the number of infections and deaths increased exponentially.  The U.S. and European countries dithered, bickered and pointed fingers. Weeks passed — and the inexorable pandemic described in Lafforgue’s model has exacted a terrible human toll.

China on a ‘war footing’

But this was not the response everywhere. China took dramatic and ultimately effective global quarantine measures. The government put the country on a war footing to combat the pandemic. Factories ramped up to increase the supply of needed supplies. Scientific labs immediately began to study the virus. Emergency facilities were built in record time.

The first COVID-19 outbreak had occurred in Wuhan, Hubei Province’s capital and a major transportation hub. Tens of thousands of health care workers aided the people of Wuhan and Hubei Province. The Chinese government imposed a 76-day lockdown on Wuhan, beginning Jan. 23, 2020, that had essential popular support.  This action successfully interrupted transmission of the virus.

There have been 4,636 COVID deaths in China since the pandemic began, mostly in Hubei Province, which has 59 million residents.  France, with over 65 million people, has so far had nearly 79,000 deaths.

Other countries in Asia, Oceania and elsewhere immediately took notice of China’s measures. Vietnam, South Korea, the state of Kerala in India, Cuba, Australia and New Zealand moved quickly and decisively, to their considerable benefit.

Only weeks after the virus was well-established did European countries and some North American countries reluctantly adopt some of the measures implemented by China early in the pandemic. But for many countries, and certainly for the U.S., it was already too late to get a grip on the galloping spread of the virus. The measures they implemented have been too little, too late, and too intermittent to have a decisive impact.

The result is the terrible toll in death and economic dislocation that has occurred in Europe and the U.S., which is by no means over. In the countries that acted quickly and focused on meeting their people’s needs, the ultimate toll has been far less. This follows the mathematical law explained so well in “Planète Malade.” Capitalist countries like New Zealand avoided major fatalities by using a combination of enforced isolation, quarantines, contact tracing and testing, and lockdowns.

Socialist countries like China, Vietnam and Cuba, whose governments are not obligated to preserve and protect capitalists’ profits, had no political obstacles and acted rapidly. Beside the public health measures all countries could have adopted, the socialist countries also had significant grassroots organizations that could mobilize popular support to provide aid to mitigate the pandemic’s impacts on people’s lives.

How to get the books

Both books have printed editions. Buying eBooks gets them to readers immediately.

“Planète malade” by Michel Collon. Two volumes in one eBook. Available in French only. Tome 1 : L’Enquête (1-431) and Tome 2 : Entretiens (1-395).  Each volume has footnotes, bibliographic resources and an index. Publisher: InvestigAction.net.  $10.99 for eBook. See tinyurl.com/1xh61qgg.

“Capitalism on a Ventilator: The Impact of COVID-19 in China and the U.S.”  Edited by Sara Flounders and Lee Siu Hin.  A project of the International Action Center and the China US Solidarity Network. Order paperback for $16 (plus shipping) at  tinyurl.com/CapVent-print or order eBook from Kobo for $12.99 at tinyurl.com/CapVent-ebook.