Feb. 7 — President Joe Biden seemed to announce an end to Washington’s complete support for Saudi Arabia’s war on Yemen last week, reversing Trump’s and even the Obama/Biden administration’s public policy. He called the war a “humanitarian and strategic catastrophe.”

In his first presidential foreign policy speech on Feb. 4, Biden said, “We are ending all [U.S.] support for offensive operations in the war in Yemen, including relevant arms sales.” (whitehouse.gov) But he quickly added that Washington will continue to help Saudi Arabia to “defend its sovereignty and territory,” including selling the Saudis massive new high-tech weapons, for “defensive” purposes.

On Jan. 25, over 300 antiwar and humanitarian organizations worldwide called for an end to the Saudi war and highlighted the Western countries’ role as enablers of Saudi crimes in Yemen. “The war is only possible because Western countries — and the United States and Britain in particular — continue to arm Saudi Arabia and provide military, political and logistical support for the war . . . The Western powers are active participants and have the power to stop the world’s most acute human crisis.” (actionnetwork.org)

What does Biden’s announcement mean for Yemen and for other countries in the Pentagon’s crosshairs, who are struggling to survive U.S. economic strangulation via sanctions?

Biden seems anxious to change the perception of its role in the war in Yemen and disguise Washington’s strategy of using the reactionary Saudi monarchy to counter and attack the Iranian government. A look behind this maneuvering should ensure that no section of the antiwar movement, despite enthusiastic media and congressional applause, is taken in by Biden’s announcement.

According to the Feb. 5 NY Times, “When Saudi F-15 warplanes took off from an air base in southern Saudi Arabia for a bombing run over Yemen, it was not just a plane and bombs that were American. American mechanics serviced the jet and carried out repairs on the ground. American technicians upgraded the targeting software and other classified technology, which Saudis were not allowed to touch. The pilot was likely to have been trained by the United States Air Force.

“At a flight operations room in the capital, Riyadh, Saudi commanders sat near American military officials who provided intelligence and tactical advice, mainly aimed at stopping the Saudis from killing Yemeni civilians.”

So, in reality the U.S. military directly collaborated in the many horrendous massacres Saudi Arabia’s armed forces committed during its ongoing war in Yemen. Every bombing run used targeting software, intelligence and tactical advice, which the Saudis were not even allowed to “touch.”

The attacks included the publicized and universally condemned bombings of schools, school buses, hospitals, U.N. Aid Agencies and wedding parties. The bombing of Yemen’s civilian centers led to a cholera epidemic and famine.

Biden’s announcement of U.S. support for the war in Yemen positions U.S. imperialism for continuing the war with protracted rounds of “negotiations.” Taking part in these negotiations would be Washington’s client regime in Saudi Arabia and the Gulf monarchies who backed this criminal war all along.

Since the 1979 Iranian Revolution broke a major pillar of U.S domination of the region, only Saudi Arabia and Israel remain to uphold U.S. corporate power. Despite differences in how to proceed, Biden has no intention in letting U.S. support for the brutal Saudi regime slip. 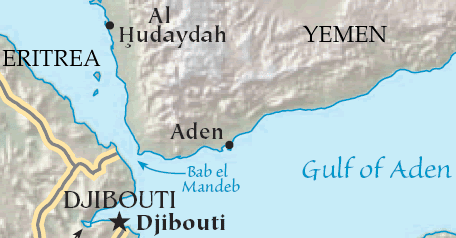 Saudi Arabia’s neighbor Yemen has a strategic location on the Bab el-Mandeb, the narrow strait linking the Red Sea and the Gulf of Aden. Ships carrying fossil fuels must pass this choke point between the Horn of Africa and the Arabian peninsula to travel between the Persian/Arabian Gulf and the Mediterranean Sea through the Suez Canal to the SUMED pipeline. (tinyurl.com/y5zlnutr)

Both Washington strategists and the totally corrupt Saudi royal family live in fear that a Yemeni government based on a popular nationalist movement could threaten Bab el-Mandeb and their domination.

Despite six years of relentless bombing, use of antipersonnel bombs, U.S. naval blockade, economic sanctions and drone attacks, the U.S.-Saudi alliance has utterly failed to defeat the popularly based Ansarullah movement, also called the Houthis. As the Feb. 5 NY Times noted, “about 80% of Yemen’s population of 30 million people live in areas under Houthi control.”

The Ansarullah movement manages to administer a large area of Yemen, including the capital city, Sana’a and most population centers. The movement has grown and matured, from a radical uprising that began in northern Yemen against corruption, through numerous alliances, into a national insurrection demanding economic development and a democratic and nonsectarian government.

In the 1990s, a mass resistance movement for change arose in opposition to Saudi Arabia’s intentionally divisive, sectarian influence in the region. Yemen has both Sunni and Shia Muslim population.

Ansarullah was led by a political, religious leader, Hussein Badreddin al-Houthi, a member of Yemen’s Zaidi Shias, who make up about one-third of the population. Western forces named the movement after this leader, calling it the Houthis. Al-Houthi’s 2004 death did not lead to the movement’s defeat; his brother, Abdul Malik, remains a leader.

This radical uprising, originally based in the Shia Muslim community of Yemen, gained broad support from the Sunni Muslim population. People saw Ansarullah as a popularly based movement against corruption and feudal reaction.

In 2014, national anger erupted over an International Monetary Fund demand on the Yemeni government to implement an austerity plan and remove fuel subsidies, which raised the prices of food, water and mass transit. Mass protests overwhelmed the government in September 2014. The ranks of the military refused to act against the popular movement.

In January 2015, a shaky coalition government collapsed when faced with the popular demand for a new constitution. A Revolutionary Council was declared. Then a National Salvation Government was more firmly established.

In this period the two sides of the war in Yemen were formed. On one side, the Saudis, the monarchies and U.S. imperialism backed the unpopular regime headed by Abd-Rabbu Mansour Hadi. In the U.S., British and EU media, this grouping was called the “internationally recognized government.” The “Republic of Yemen Government” had its base in Saudi Arabia.

The ROYG is unable to govern any area of Yemen or hold any territory securely.  Its rotating cabinet has had numerous splits, changes and assassinations. There have been divisions between northern Yemeni commanders and the South Yemen Southern Transitional Force, who hold the port of Aden and have shifted alliances back and forth. Fighters aligned with al-Qaeda in the Arabian Peninsula and Islamic State group, who have often received U.S. and Saudi support in Syria and Iraq, have now moved into areas of South Yemen.

In an effort to prop up and give legitimacy to the Hadi “government in exile,” multiparty negotiations were held in Stockholm, Sweden, and Geneva, Switzerland.

On March 25, 2015, Saudi Arabia announced the beginning of military operations in Yemen to restore the overthrown Hadi government. The Saudi-U.S. strategists expected the operation to win quickly, lasting one month at most.

A war coalition of more than 10 countries was hastily cobbled together by Saudi Arabia with full U.S. support. It included the United Arab Emirates, Bahrain, Kuwait, Qatar, Pakistan, Morocco, Egypt, Sudan and Jordan.

The war has turned into a disaster for Saudi Arabia and the U.S. They are hopelessly bogged down in an unwinnable war and faced with a dilemma.

Airstrikes alone are incapable of defeating the Ansarullah armed insurrectionary movement. Sending ground troops into the north Yemeni highlands could lead to mutiny and collapse of the Saudi military. On the other hand, a complete Saudi withdrawal and victory of a radical uprising on the Saudi border could be a dangerous humiliation and highly contagious.

In September 2019, missiles struck Saudi Arabia’s eastern oil fields of Abqaiq and Khurais, disrupting nearly half of Saudi oil production. The resistance movement openly claimed responsibility. Saudi Arabia and Washington refuse to acknowledge Ansarullah’s capacity to strike such a devastating blow. Instead, they have accused Iran of carrying out the attacks.

And they blame Iran for supporting the Ansarullah insurrection, although Yemen is under complete naval blockade and has no common border with Iran.

Lessons of Syria and Afghanistan

Washington during the Obama-Biden Administration played a similar role in Syria. In 2011, a small uprising instigated by Washington received immediate support.

There was great confidence that the Syrian government would not survive a month. A complete collapse was predicted. U.S. imperialist allies and corrupt Gulf monarchies signed on to an all-out effort to pull the Assad government down.  Negotiations involving an appointed government in exile took place for years in London, Geneva, Paris.

The Syrian people rallied to oppose this imperialist takeover. More than 100,000 well-armed and financed mercenary and reactionary fighters were imported into Syria. From 2014, U.S. bombardment and U.S. bases and U.S. sanctions have continued the efforts. During the entire war, Washington’s politicians and other imperialist forces have claimed they are seeking a peace accord.

In Afghanistan where U.S. war has ground on for 20 years, at every step the U.S. has promised a withdrawal — as soon as a stable government is in place or a negotiated peace agreement.

Washington’s involvement in negotiations has never meant an end to war. It is just another form of continuing the war.

“We consider any move that does not end the siege and aggression against Yemen as just a formality and do not pay any attention to it,” Mohammed Ali al-Houthi, a member of Yemen’s Supreme Political Council said in a post published on his official Twitter page early on Feb. 6.

“The U.S. decision to end its involvement [in the war] and command of the aggressor states is not enough. . . . Washington’s allies must also commit themselves to compensate victims, enact a package of measures to guarantee the sovereignty of Yemen, recognize its independence and legitimate right to self-defense, and consider any military action either by Arab or foreign states as a criminal act.”

Mohammed al-Bukhaiti, another member of Yemen’s Supreme Political Council, told Al Mayadeen TV news on Feb. 5 that “The war in Yemen ends once all airstrikes stop and foreign forces leave the country. . . . The United States may reduce its support for aggressor states without stopping it altogether.”

U.S. Navy Capt. Bill Urban, a spokesman for Central Command, said U.S. evaluation of a Red Sea port in Saudi Arabia and an additional two airfields began following the 2019 missile attack against the state-owned Saudi Aramco oil processing facilities at Abqaiq, which was blamed on Iran.

Currently, some 2,500 American soldiers maintain fighter jets and Patriot missile batteries at Prince Sultan Air Base southeast of Riyadh. Saudi Arabia and the U.S. have continued joint military exercises in a show of force over the past six weeks.

Biden said the purpose of his Feb. 4 remarks was to “send a clear message to the world: America is back” and that Washington will continue to help Saudi Arabia  defend its sovereignty and territory.

This may well mean far greater involvement, not less.